Jessica Zaleski has been appointed state’s attorney in Caledonia County, Vt., by Gov. Phil Scott. The state's attorney for individual counties in Vermont is the chief law enforcement officer of the county, a public office filled either by appointment or election. The vacancy occurred after Scott’s selection of former State’s Attorney Lisa Warren as a superior court judge. Zaleski has been serving as the county’s acting state’s attorney since October.

After being appointed acting state’s attorney for the transition period, Zaleski then asked that her name be added to the list of candidates for the position submitted to the governor.

A graduate of Oak Grove Lutheran School in Fargo, N.D., Zaleski earned her bachelor's degree from Concordia in 2000. A North Dakota native born in Devils Lake, Zaleski began living and working in Vermont after law school.

“I have some eastern roots and relatives through my dad's side of the family, but I visited Vermont Law School and basically fell in love with the landscape,” Zaleski said. “I live in the woods in Vermont. Most do out here. My life in Vermont consists of working and caring for my teenage daughters (triplets), McKenna, Harper, and Bennett. It is very different from North Dakota.” 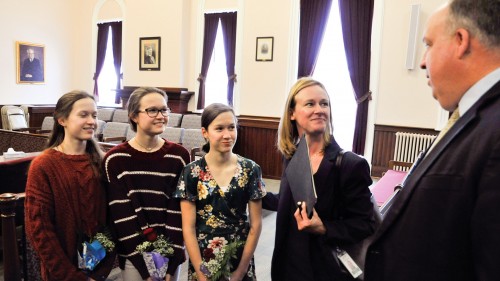 Zaleski spent several years on the other side of the aisle as a public defender before making the switch to the prosecutor’s table when she took the position of deputy state’s attorney for juvenile protection in Caledonia County.

“I love public defender work,” Zaleski said. “I particularly love working within the juvenile justice system. It is a switch to turn to prosecution, but I have found it rewarding.”

Zaleski says there are many things a prosecutor can do within the system and pre-charge to institute positive change that simply isn't possible on the public defense side. But the deciding factor in the switch was the opportunity to work with Warren.

“When Lisa approached me for the deputy state’s attorney position, it was to fill a juvenile prosecutor job, so it was a perfect fit for me,” Zaleski said.

While at Concordia, Zaleski decided she wanted to work within the juvenile justice system when she interned for Joe Parise, a public defense attorney in Minnesota and the father of a fellow Concordia classmate.

“I saw what Joe did every day and just knew that's what I wanted to do,” she said.

She also worked in the Communications and Marketing office for the News Bureau (now Media Relations).

“I had amazing mentors at the News Bureau and I'll always cherish my time with the news crew,” Zaleski said. “I grew up in newsrooms ... it's home to me.” (Zaleski’s father, Jack, is a former longtime editorial page editor and current columnist for The Forum in Fargo.)

Zaleski’s time at Concordia gave her the opportunity to figure out her career path and hone the skills necessary to be an attorney.

“Concordia taught me to write. And to rewrite. And rewrite again,” Zaleski said. “I had wonderful English professors. Concordia also taught me to stay true to myself, my work ethic, and my faith.”