Two Concordia faculty members are featured in a public photography project in the Fargo-Moorhead area in November and December.

The Brooklyn-based Photoville FENCE, in its ninth year, is an annual outdoor art festival where large-scale photographs printed on vinyl mesh are attached to chain-link fences bringing visual storytelling to life.

From his work doing reviews in photography magazines, W. Scott Olsen, professor of English, was familiar with Photoville so when he found out they were adding a traveling festival he brought the idea to The Arts Partnership.

“I thought Photoville was the coolest thing ever,” Olsen said. “When I brought it up to The Arts Partnership, they thought it was a nifty project.”

Local jurors for the exhibit were Wayne Gudmundson, Robert Schlomann, Scott Seiler, and Ann Arbor Miller. Schlomann said Olsen’s series was among his top five out of hundreds of series they viewed.

“I love this ’Scenes from a Moving Window’ series,” Schlomann said.

In referring to Olsen’s photo (above), Schlomann said, “It’s monochrome so in a sense there is no color, but there is a lot of tonality that kind of works like color. It doesn’t have hue, but it has luminescence and tonality in the lights and darks. I think he’s managed that well in all of these where he’s stuck with whatever his point of view is; he’s got that point of view for seconds because the train is moving so he’s worked out his exposures pretty well.”

Olsen’s “Scenes from a Moving Window” are from a series of photos he took for his book about riding around the country in an Amtrak sleeper car. The book is a result of Concordia’s summer Undergraduate Research, Scholarship, and Creative Activity (URSCA) program. In the summer of 2019, Olsen and two students, Linden Stave ’21 and Sonja Flancher ’20, were funded through an endowment supporting undergraduate research and scholarship in the humanities and social sciences. Olsen rode the train and took the photos, and Stave and Flancher did the deep dive background on trains.

Mortenson’s “Tumulus” series brought to Schlomann’s mind the pristine landscapes of Ansel Adams that didn’t feature the encroachment of people, and he talked of how the photographs in Mortenson’s series are of a drastically altered landscape in the Mesabi region where mining has played a role in nature but the landscapes are still beautiful.

The “Tumulus” series is a visual investigation of the human-altered landscape in the Mesabi Range in Minnesota but also a document of the cultural and societal complexities of the Range. Mortenson’s photograph (below) from the series is “Great Northern Transmission Line.” 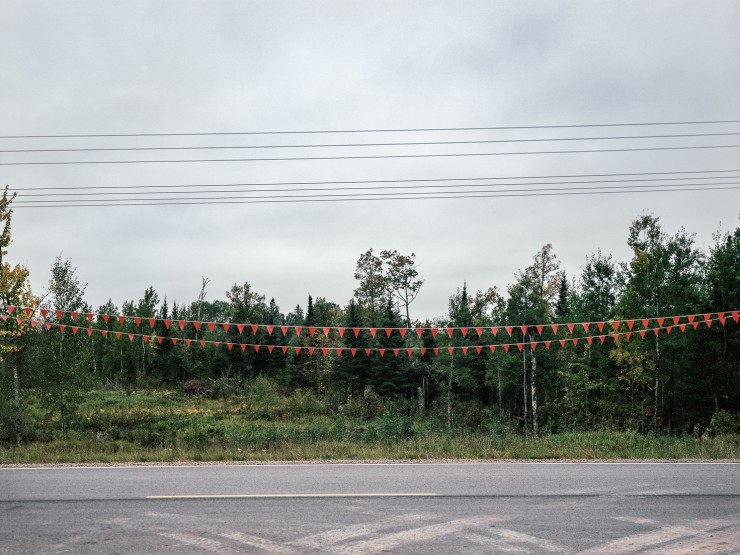 “This is a series that I’ve been working on for the last few years and one that is still in progress,” Mortenson said. “This project has marked a shift in the work that I make and in some ways is a return to ‘traditional’ photography from the composited images of the landscape that I had been making since about 2008. As a project, it started by being focused on the hills of overburden that are built up all along the Mesabi Range.”

He first saw the large hills when he was young on a visit to his uncle who told him the hills were man-made as a way to dispose of soil stripped from the mines. As Mortenson got older, the hills stayed with him and he believes they were a major influence on his work.

“Once I began at Concordia, I knew that I would be making work about those giant hills of overburden,” Mortenson said. “As the work began, it slowly changed into a non-linear document of the Iron Range. I’m very excited to have it as part of the Fence Regional Showcase.”

“Tumulus” was made possible in part from two major grants: a Legacy Grant from the Lake Region Arts Council and an Artists Initiative Grant from the Minnesota State Arts Board.

You can view the FWMF Metro (North Dakota, western Minnesota, and northern South Dakota) exhibit at Rheault Farm in Fargo, Scheels Soccer Complex in West Fargo, and at the football field at Minnesota State University Moorhead.

In addition to its home base of Brooklyn, Photoville FENCE will also be displayed in several additional U.S. cities and Calgary, Alberta, Canada.