For the third time since Concordia’s induction as the Gamma Gamma chapter of Sigma Zeta in 2012, Concordia won the Founders’ Cup. The Sigma Zeta National Science & Mathematics Society’s 2019 National Convention was held in March at Malone University in Canton, Ohio.

The Founders’ Cup award is given based on chapter activity at the local and national level. To be eligible for consideration for the award, a chapter must have activities in both areas.

“This win is impressive as you are not eligible the year after you win so you can only win every other year, and we have been,” said Dr. Joseph Whittaker, associate professor of biology and environmental and sustainability studies. “We have tremendous outreach and community involvement and that is largely responsible for our success. Our students are also very active in research – four of our students were awarded Sigma Zeta research grants in 2018 and participate in scientific meetings.”

Sixteen participants attended the conference, including 14 students, Whittaker, and Dr. Graeme Wyllie, assistant professor of chemistry and coordinator of the Concordia Science Academy. The Founders’ Cup award reflects the efforts of the entire group. Concordia students also presented seven posters at the conference.

Seniors Alexis Guttormson and Elli Strand, with co-authors including Raelin Kronenberg ’19 and Rebecca Dahl ’19, won poster during the poster session. 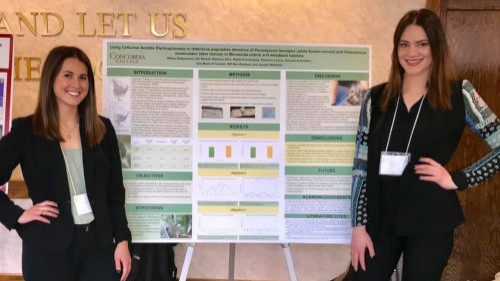 “There was a lot of competition this year, so this represents quite an accomplishment,” Whittaker said.

Both Guttormson and Strand have previously been to multiple conferences to present their research.

“The trip to Ohio for Sigma Zeta was exciting because we won first place for our poster session and all of our hard work finally paid off,” Guttormson said. “It was worth the 15-hour drive both directions.”

Whittaker said he believes this success has motivated Guttormson and Strand to go to an even larger meeting and their next stop is Washington, D.C., to present at the American Society of Mammalogists annual meeting, which they recently received funding to attend.

Sigma Zeta, a national undergraduate honor society to encourage and foster scholarly activity and recognize academic scholarship in the natural and computer sciences and mathematics, was founded at Shurtleff College in Alton, Ill., in 1925.

Concordia is home to two of its national officers: Wyllie, president-elect last year, started his term as national president and Whittaker is the  publicist.

Concordia will host the national meeting next year.