Concordia College virtually hosted the Sigma Zeta National Chapter annual convention this spring. Concordia was originally scheduled to host the 2020 convention, which was canceled due to COVID.

“I believe it was the first time the meeting has been canceled since World War II,” said Dr. Joseph Whittaker, associate professor of biology. “Several students really pitched in to make the Gather (gather.town) format work as we did a remote meeting.”

Lauryn Petrich ’21 and Vanessa Petrich ’21 were the chapter president and vice president, Taylor Devine ’23 was re-elected the national student representative, and Lauryn Hinckley ’22, Kelly Lorenz ’23, Cole Nowacki ’24, and Amelia Landsverk ’23 are officers who helped with the planning. Dr. Graeme Wyllie, assistant professor of chemistry, was the national past president at the time of the meeting. 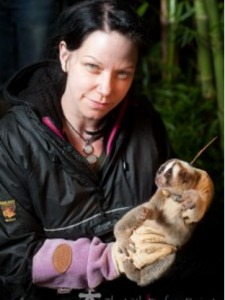 The keynote speaker was Dr. Anna Nekaris, a professor specializing in anthropology and primate conservation based in Oxford, England, who spoke on “Conserving the Critically Endangered Javan Slow Loris through Ecology, Education and Empowerment.” Her research on Asian lorises (nocturnal strepsirrhine primates) led to a novel study of how lorises are one of the only mammals to produce venom.

The convention included both oral and poster presentations and Reilly Mach ’22 won the Best Oral Presentation Award for “S-Nitrosylation of Palmitoyl-Protein Thioesterase 1 (PPT1) in Neurodegenerative Diseases.”

Wyllie said it was worth pointing out it was also the 10th anniversary of the founding of the Sigma Zeta Gamma Gamma chapter at Concordia. Sigma Zeta is dedicated to the principle that natural and computer sciences and mathematics are best taught by actively engaging students in research.

“Joe is the one who brought SZ here when he started. In that 10 years, we’ve had a healthy number of students present talks and posters every year the convention has been held,” Wyllie said. “It’s really been an opportunity to share some of the research done in ISC (Concordia’s Integrated Science Center) at a national level, and my own lab has regularly been part of our national presentations.”