Concordia sent 12 members to the American Forensic Association National Individual Events Tournament (AFA-NIET) at the University of Alabama, where 60 colleges and universities from across the United States competed for top honors. Concordia was one of only a few smaller colleges that placed in the top 15, which is dominated by larger research institutions.

“Just qualifying for the national tournament already puts an individual competitor in a top percent of the nation because of how rigorous the process is,” said Zach Oehm, assistant director of speech.

In order to compete in this highly competitive national collegiate tournament, a competitor needs to show consistent success during the regular speech season, which runs throughout the academic year. The qualifying standards are challenging, making the AFA-NIET the premier national collegiate speech tournament.

Concordia has a young team with three juniors, six sophomores and three first-year students. The students took 41 entries to the AFA-NIET.

Leah Roberts ’21 placed third in Prose Interpretation out of a field of 124 competitors. Roberts broke to quarterfinals in Drama Interpretation, placing her in the top 26 competitors in that category. 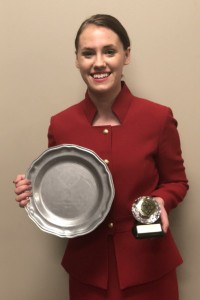 “Taking my place on the national stage with the other prose finalists felt so right. I had visualized it for so long and had been coached to believe I could get there, but nothing could have prepared me for the complete joy. It was humbling, it was something I still can’t quite wrap my head around,” Roberts said. “Our team and coaches worked hard and diligently from day one to earn our spot in the top 20.”

Abigayle Reese ’20 and Dominic Meyers ’21 broke to quarterfinals, putting them in the top 26 competitors out of a field of 110.

“Our team has worked hard over the past two years with our new and amazing coaching staff,” Reese said.

Amundson believes the rigorous work students do in competitive speech is the embodiment of a liberal arts education.

“Competitors are tasked with gathering information from a wide variety of sources, carefully analyzing what information is most relevant to their topic, creating something new with the research they’ve gathered, and presenting it to the public and academics for critique and revision,” she said. “Our students do this over and over again in a process that starts in August and ends in April each year.”

“Placing 12th in the nation and advancing to out rounds made all that hard work so affirming,” Reese said.