Kelly Lorenz ’23 received a $600 grant from the Beta Beta Beta Research Foundation for her continuing research on mice.

Lorenz conducts her research under the direction of Dr. Joseph Whittaker, associate professor of biology and co-director of environmental and sustainability studies, along with a few other students: Vanessa Petrich ’21, Lauryn Petrich ’21, Cole Nowacki ’24, Amelia Landsverk ’23, and Taylor Devine ’23.

“I'm excited and grateful to have received this grant,” Lorenz said. “This grant is going to help allow the research we have been working on to continue into the next year and allow us to enhance the equipment we have been using to create a more efficient research environment.” 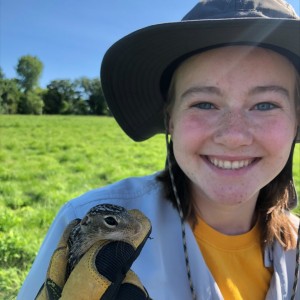 Lorenz, Peyton Lehman ’21, and Zach Buchholtz ’21, led by Whittaker, conducted research this past summer. They used live traps to collect small mammals to look at prairie diversity in remnant and restored prairies.

Students trapped many different small mammals, including the two different species of mice that Lorenz is studying – white-footed mice (Peromyscus leucopus) and deer mice (Peromyscus maniculatus). Lorenz said these two species look very similar to each other and are hard to tell apart just by using physical features, so saliva is collected from each mouse in order to determine if the mouse is a white-footed mouse or a deer mouse. 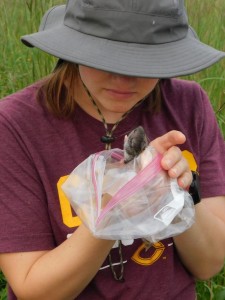 The research objective is to use molecular identification to find characteristics to identify the mice visually, through field measurements, that are more reliable and give researchers a way to make a more accurate identification in the field.

The mice in the study, “The Differentiation of White-Footed Mice (Peromyscus leucopus) from Deer Mice (Peromyscus maniculatus) by Comparing Salivary Amylase Electrophoresis and Morphological Measurements,” are two of the most frequently encountered small mammals in North America. The ability to reliably identify them is ecologically important because, in addition to helping control insect pests, both species serve as food sources and are indicators of climate change. They are also important reservoirs for Lyme disease (white-footed mice) and hantavirus (deer mice).

“Understanding the nuances of the ecological differences of these two remarkably similar species of mice is impossible without being able to identify/differentiate between these two species,” Whittaker said.

Because of climate change, the white-footed mice have been expanding their range north, bringing them into increased contact with deer mice and, at the same time, it has become more difficult to differentiate between the two species other than in the lab.

Lorenz just presented at the National Wildlife Society meeting and will present the data she is currently collecting through her research at either a regional district convention or a national biennial convention of TriBeta (Beta Beta Beta).

“I love talking about my research,” Lorenz added. “And I would like to thank Dr. Whittaker for guiding me in the application process and for all he does for us students in research.”

NOTE: Lorenz was also awarded a $483 grant for her research from Sigma Zeta, a national science and mathematics honor society.