Dr. Grigor Khachatryan, associate professor of piano, received international acclaim for his debut CD and made the cover of the most prestigious piano magazine in the world, International Piano.

“That publication is the world’s foremost magazine in the field of piano performance,” says Dr. Nat Dickey, music department chair and professor. “In the six years Grigor has been here, he has been a dynamic member of the faculty, teaching at a high level, performing around the region and the nation, and modernizing our piano pedagogy approach.” 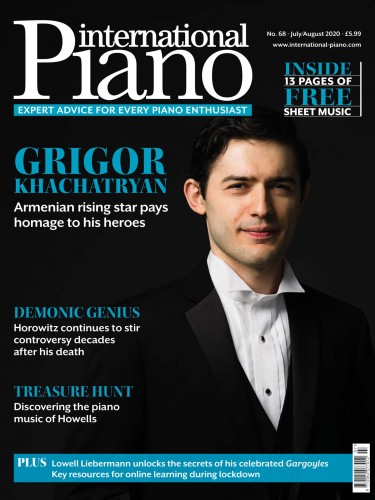 Whether or not to even record a CD was something Khachatryan thought about for a long time.

“If you are a writer or a journalist, the peak of your scholarship is writing a book and for performance artists such as myself the pinnacle is really the performance itself,” Khachatryan said.

But in the 20th century, the recording medium shifted things. Khachatryan wasn’t really interested in recycling already recorded material. It wasn’t just that, but also the marketing side of things – who is going to buy it?

Recording wasn’t new to Khachatryan. He founded YouTubeConservatory where you can find many of his recordings, tutorials, and tips on reading and playing music. Though he was nervous about documenting his work, he had a fascination about recording his own compositions so that he’d be really contributing something to the portfolios of CDs on the market.

The Process and the Press

Khachatryan, an Armenian native, decided to record two of his sonatas, large-scale works frequently 15-20 minutes long, though his are more like 50 minutes. The first sonata is based on the Battle of Avarayr between Armenia and the Persian empire, an actual battle in 451 AD that was the first war in defense of Christian faith. The second is based on David of Sassoun, a mythical hero for justice and freedom, from an epic poem. He titled the CD “Spirit of Freedom.” 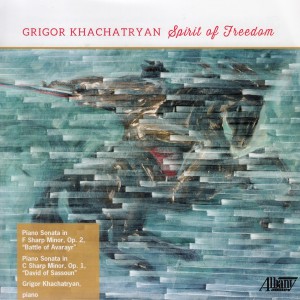 Khachatryan worked on one of these sonatas on and off for nearly a decade, but the sonatas really started to shape up during the spring of 2018 as he started to think about pairing the works in a two-disc CD set. Just like an editor would have to trim down a novel to fit certain parameters, that kind of editing had to be done and Khachatryan’s editing completely transformed some of the movements. He also approached Heidi Goldberg, professor of art, about painting the heroes for which the pieces were inspired for the premiere and also for cover art.

“At the core, this work is influenced by three things; my work, the sculpture of David of Sassoun, and Grigor’s music,” Goldberg said. “My challenge was to represent the essence of the Kochar bronze, blended with what my ear was hearing in passages of Dr. Khachatryan’s composition as he played it on the piano.”

After meeting several times, Goldberg presented Khachatryan with several drafts and asked his advice on the medium and style of the painting. He said in many ways their collaboration and her painting inspired the world premiere of the compositions at Concordia on Feb. 3, 2019.

“After the premiere, a lot of musical ideas still changed before the recording of the CD,” Khachatryan said. “I performed the composition in several successful concerts in half a dozen universities across the U.S. as well as on my concert tour in Shanghai, China in 2019. The more I performed them, the more I felt the itch of revising them. It’s the nature of the beast.”

After all the work and being extremely self-critical, Khachatryan knew it was good, but never in his wildest dreams did he think it would have this much exposure.

The CD was published Nov. 1, 2019, by Albany Records, who sent it to several magazines, radio stations and six reviewers hoping to get one review. It ended up with five reviews and an interview and a cover feature for the March/April issue of the Fanfare magazine.

“I was really shocked that almost all reviewers wrote about me as a composer,” Khachatryan said. “That was so nice because I do have composition training, but my experience on stage, at least the vast majority, has been as a performer.

The positive reviews boosted his confidence and Khachatryan reached out to the International Classical Music Award (ICMA), the equivalent of the worldwide Grammys for classical music, receiving very positive reviews from the president and an ICMA judge.

“I wasn’t thinking about my resume so much, but was actually curious about what musicians and critics thought of my work,” Khachatryan said. “I don’t have my piano professor with me anymore since she passed away – the legendary Luba Edlina-Dubinsky, to whom the CD is dedicated to – so I don’t have anyone to criticize me and it’s nice to be grounded by what other people think of my work.”

A close friend sent him a subscription to International Piano (based in the U.K.) for his birthday and when he received his first issue he realized they review CDs. Unlike Fanfare, they only review piano works and only the best of the best.

Shortly after sending two copies of his CD accompanied by the printed musical scores to the U.K. to International Piano requesting a review, he got a call in February from Owen Mortimer, the chief editor, telling him they’d love to feature him on the cover of the July/August issue. Khachatryan was in disbelief.

“It was a weird conversation. Mortimer kept saying ‘we want to feature you on the cover’ and I was like you mean this page? My face is going to be there on the front cover?” he asked.

He’s still in awe that he’s on the cover of a magazine that has featured truly the best of the best pianists across the world.

Khachatryan was told by Mortimer that it was the supreme quality of the music and the performance which captured his attention and that International Piano would be honored to represent such an artist in the most coveted spot of the magazine. Khachatryan went on to dominate International Piano’s website during the month of July and August as the artist of the season, featured with multiple home page advertisements and e-newsletters as well as social media exposure. In the subsequent issue, Khachatryan’s CD gained yet another positive review, this time from International Piano as the Critic’s Choice.

“I don’t care about the fame,” Khachatryan said. “I am simply so thrilled that people in England who don’t know me found my music valuable enough to put me on the cover. When people who don’t know you, look at your work and say ‘we think your work is that good,’ it motivates me to keep doing it. Now to be honest with you if they said it was terrible I’d probably still do it, but it is so important for an artist to be appreciated.”