“’Reflections’ is a well-rounded album including several staple trombone solo works along with two works by the soloist himself,” said Nathan Dishman of Iowa State University when reviewing Dickey’s new CD for the International Trombone Association Journal. “Dickey demonstrates complete command of the instrument on every track, and bookending unaccompanied solos with the heavy lifting in the middle sums up this superb album.”

“Reflections” was made possible because of a $5,000 grant Dickey received from the LRAC/McKnight Fellowship Music/Visual Arts in the summer of 2016. The McKnight Fellowship awards a grant each year to recognize one outstanding artist in the region. 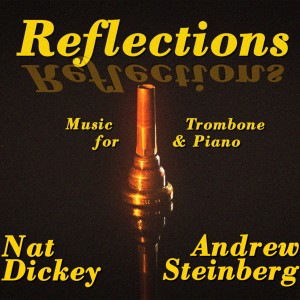 “My first CD had a cast of thousands (not literally),” Dickey joked, “but partly due to the funding and the timing, I felt I needed to scale down this time, so it was just pianist Andrew Steinberg and me.”

The first step was to decide which music to record. There were a couple of well-known published works for trombone Dickey was interested in along with another lesser-known piece. Colleague Dr. Steven Makela, assistant professor of music, was in the midst of composing a work so Dickey added that piece as well. Dickey also composed a piece for the recording.

Dickey and Steinberg had recorded some short improvisation so he had some sounds they had created together off the cuff. The piece he composed grew out of that 30 seconds of raw material.

“There’s a lot of mystery to where creativity comes from,” Dickey said. “I’m kind of a math person so there is a certain puzzle logic component of how the different notes fit together, but then there is the emotional or artistic side – what sounds good. It’s a marriage of those two things.”

“With my composition, I have made modifications even once it was done,” he added. “Art is such a living thing – not static.”

With the music set, Dickey then got to work recording in Concordia’s recital hall with Steinberg and Erik Vigesaa, a local recording engineer from Fergus Falls, Minn. Multiple recordings during 2016-17 went into the process including multiple takes of segments of the pieces with the best of those seamlessly stitched together by the engineer.

Dickey then sent the master to Jamey Lamar, a friend who is a sound engineer on the West Coast, who did some enhancement so the sound would be everything they wanted it to be. Dickey said there is some disagreement among musicians about how much “magic” is too much, but he likened the process to airbrushing a photograph. Lamar polished everything; he didn’t add anything but brought the recording to life in a way that it will work best when played back through headphones or speakers.

At the same time, Dickey’s teenage son, Ben, who is interested in graphic design, created the cover art for the CD from photographs a friend, Tim Kolehmainen, took of Dickey and his trombone.

“After Ben created the cover art, we pressed it at Copy Cats in Minneapolis and released it through CD Baby,” Dickey said. “The recording is also available through Spotify, iTunes, and YouTube.”

The journal publishes quarterly so, while the CD was released in 2018, Dickey was pleased with the recognition it received in the October 2020 issue of International Trombone.

“It’s nice to get attention for it in professional circles,” he said, “especially the newer works by Steve Makela and myself.”