After graduating from Concordia, Christie Manisto ’93 attended grad school at the University of Illinois at Chicago, earning a Master of Education degree and a teaching certificate. After 10 years of teaching in Minnesota (mostly Roseville), she made a career switch that took her to Egypt.

“I finally followed a call to seminary – that truly began when I was at Concordia being challenged and dazzled by the religion professors there at the time,” Manisto said. “Thank you, Sister Shawn Carruth and Dr. Larry Alderink.”

Manisto attended the Lutheran School of Theology at Chicago, where she earned her Master of Divinity degree. After being ordained in 2008 in the ELCA, she served as an associate pastor for seven years at Trinity Lutheran Church in Princeton, Minn., and three years at a congregation in Vancouver, Wash. Following that, she left parish ministry and did a one-year CPE residency at Portland Providence Hospital. Once that was completed, she and her husband, Steve Saari, thought about what they wanted to do next. That’s when a friend who serves in global mission told them about a call in Egypt.

“We applied thinking there was NO way we’d get the job as we were sure we were not qualified,” Manisto said. “God had other plans and here we are and we love it.”

Manisto and Saari accepted a call through ELCA Global Mission to St. Andrew’s United Church of Cairo and St. Andrew’s Refugee Services (StARS) in Cairo, Egypt, and began their ministry in August. Manisto serves as pastor to the international congregation and is the pastoral associate to StARS. Saari, a special education teacher, works with StARS to provide support services to students with cognitive disabilities.

“We‘ve been amazed and grateful at the welcome and beauty we’ve already experienced in Egypt,” Manisto said.

She said Egypt is a whirlwind of incredible sights, sounds, and smells – from the small shops where all are invited to drink tea and stay awhile to the dusty streets filled with cars honking, people talking, dogs barking, and the beautiful call to prayer rising above the cacophony five times a day from the city's many mosques.

“Every corner is alive with ancient history, modern urban living, and food stands ready and waiting to serve you koshari, fresh mango juice, and more,” she added. “The best part of Cairo is that amidst all that could seem like chaos there is an underlying kindness, a common and genuine concern for the other person where we have felt welcomed as family coming home.”

Manisto and her husband also appreciate the interfaith and ecumenical nature of the ministry. At St. Andrew’s, she says, everyone is welcome just as they are and just as God has made them. 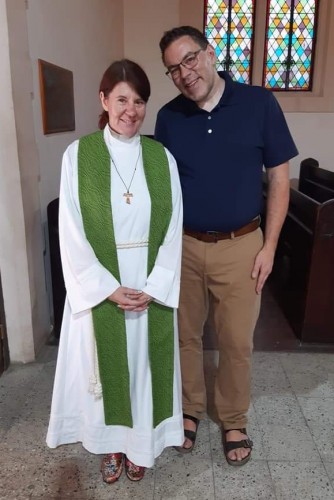 St. Andrew’s has served international and refugee congregation members since it was established in Cairo in 1899. In 1979, a ministry serving individuals who had been forcibly displaced was started. Initially created to be a safe gathering place and tutoring program, this ministry has evolved and today serves more than 40,000 people with refugee and migrant status through medical, housing, psychosocial, and education support. StARS is also a model organization founded on the idea that the best people to assist refugees are refugees themselves. Eighty-five percent of the StARS staff, which includes the team of directors, are refugees. StARS continues to work internationally to advocate for this model “for refugees by refugees.”

“It is a place where Muslims, Christians of many denominations, as well as other faith traditions and no faith traditions, find welcome, care, and support,” she said. “It is not unusual to find Muslims and Christians both playing and praying side by side in this place and feeling safe doing so. It is one of the many ways this ministry is unique.”

More information can be found about these ministries, including how to support them, on the St. Andrew’s United Church of Cairo website.

Editor’s note: The family was evacuated in mid-March but will be returning to Egypt once things have settled and airports are reopened.