Report cards can be a source of joy and sometimes anxiety. For Concordia Athletic Director Rachel Bergeson, she says a recent report card brought a sense of pride.

The University of Minnesota’s Tucker Center for Research on Girls & Women in Sport gave Concordia an “A” grade on its Women in Coaching report card for 2020-21. The report recognizes the college for having female head coaches for 70% of its women’s sports.

“Not every young woman aspires to be a coach or an athletic director,” Bergeson says, “but what I want them to see is the ability of a woman to lead.”

It is a dramatic increase from 2017-18 when Concordia received an “F” grade. 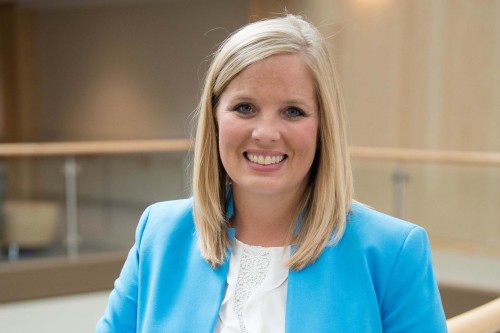 When Bergeson became the athletic director in 2018, she says the school worked to diversify its pool of coaching candidates. She was also more intentional about listening in the interview process.

“I read a book that talked a little bit about listening to men and women differently in interviews because we tend to sell ourselves very differently, and that really helped us to understand our candidates at a little bit of a deeper level,” Bergeson says.

She says she hired the best people for the job.

“The one thing that I can't be more clear about is that these were not token women hires,” she adds. “These were and are good women coaches.”

Bergeson says she has seen growth in the Concordia athletics department with a good mixture of different perspectives. 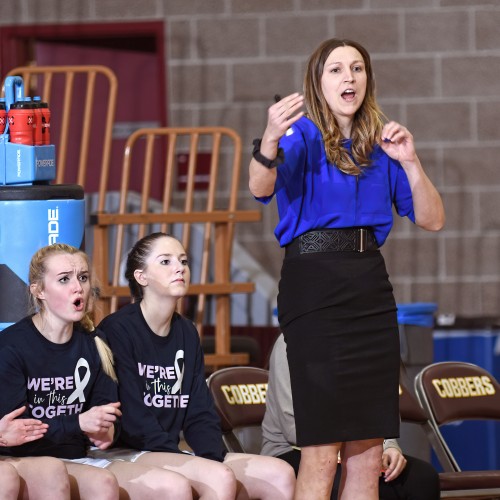 Women’s basketball coach Kim Wagers grew up hearing the stories of her hometown legends, the Moose Lake (Minn.) Lakers. There was a historic year where girls volleyball, basketball, and softball teams all took home the state titles – all with perfect records.

One of those players, Sue Caroline, went on to become Wagers’ high school volleyball coach.

“She pushed me to be a better athlete and person, and gave me someone to model after and look up to,” Wagers says. “She was an amazing athlete herself and played at the college level, and I knew if you want to be good at something find someone who has done it and emulate them.”

Wagers continued to learn lessons on female mentorship and leadership while she played in college and later coached before coming to Concordia to work with Bergeson, another role model.

Wagers and Bergeson both use the phrase “If I can see her, I can be her.”

“Everyone needs a role model that you can meet and see and talk to that can help guide and inspire you to live out your dreams,” Wagers says. “Female coaches provide that strong female presence in a leadership position and provide that model for all their athletes to see.”

The Clock Has Not Stopped

Concordia was the only school in the MIAC to receive an “A” grade in the report.

Despite receiving the top grade, Bergeson’s work is not done yet. She is looking at other ways to diversify her department, including from a race and ethnicity standpoint.

“I think that is a next step and a next important step for us,” Bergeson says.

She also sees the benefit of showing a variation of leaders as young men enter the work field.