After seniors Alexis Guttormson and Elli Strand had their poster win at the National Sigma Zeta convention in Ohio earlier this year, they both thought, why not cap their research off with the international mammalogy conference?

So it was off to Washington, D.C. But first, they had to acquire funding. Their last-minute decision to submit an abstract for the conference meant acquiring funding was last minute as well.

“We’re incredibly grateful for Concordia’s SGA (Student Government Association) and URSCA (Undergraduate Research, Scholarship and Creative Activity), as they were able to provide funding that made the trip to D.C. possible,” Strand said.

Guttormson and Strand had been working on this research project since the spring of their freshman year along with Dr. Joseph Whittaker, associate professor of biology. They accompanied him at the end of June on the trip to the 99th Annual Meeting and Centennial Celebration of the American Society of Mammalogists at the birthplace of ASM in D.C.

“The ASM meeting is something that we’ve talked about for years with Dr. Whittaker, so it’s satisfying to finally be able to go,” Guttormson said. “The conference had people from all of the world, and Elli and I were some of the few undergraduate students present.”

Strand explained that their research involved differentiating between two common mouse species in Minnesota by separating their saliva proteins using cellulose acetate electrophoresis. Peromyscus maniculatus (deer mouse) is a known carrier of hantavirus and Peromyscus leucopus (white-footed mouse) can be a carrier for Lyme disease. Due to the mice’s ability to carry and spread harmful diseases, it’s important to be able to differentiate between the two and track their movement throughout Minnesota.

“This research has always meant a lot to us, so having the opportunity to present our project at an international meeting like American Society of Mammalogists was a dream for us,” Strand said.

“As undergraduates, we felt slightly intimidated as most of those attending were graduate students or had their doctorates,” she said. “This conference was not like any we have been to before; some of the people we were presenting to had studied and done research with the same species of mice.”

Whittaker was impressed with their performance and said they had done a terrific job representing Concordia.

The trio also had a little time for sightseeing while in the capital. 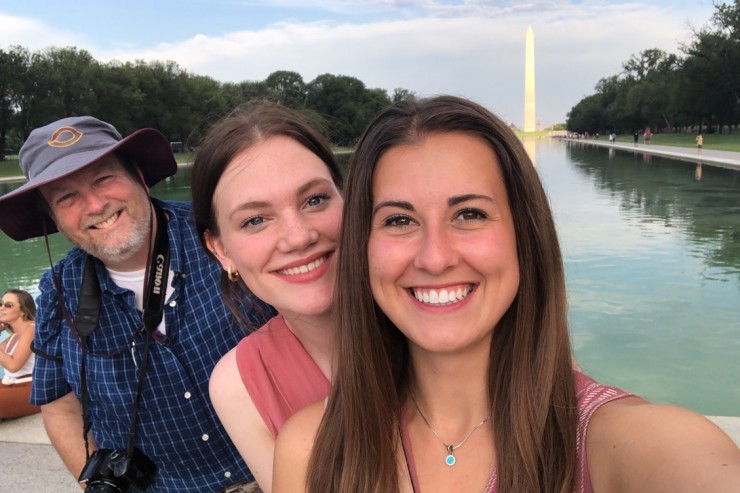 “It was my first time in D.C. and it didn’t disappoint,” Strand said. “It was awesome to be able to experience the rich history, as well as enjoy a great scientific conference. We made connections with students and professors who came from all over the country and the world. And many offered great advice on how to improve our technique as well as suggestions on where we could take our research next.”

“We’d like to thank Dr. Whittaker, as none of our research or the conferences we have presented at would be possible without him,” she added.