As an Interfaith Scholar, activist, and future lawyer, Avyan Mejdeen ’22 is organizing change on campus, in the community, and across the nation. 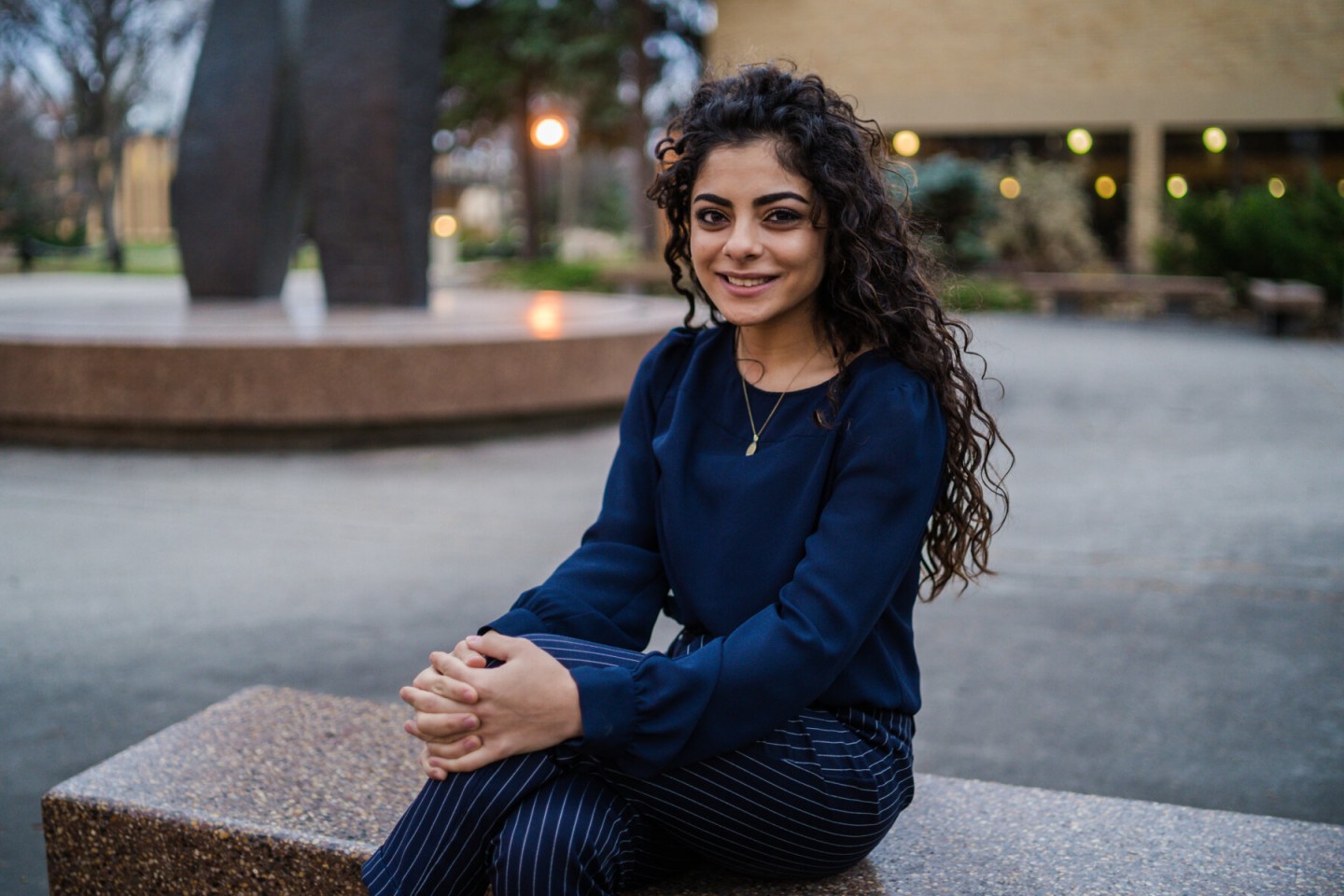 I am a junior with majors in political science and global studies along with an interfaith studies minor. As a member of the Student Government Association, Better Together, and the mock trial team, I strive to promote interfaith dialogue among students with my role as an Interfaith Scholar. I hope to become a lawyer in human rights and civil rights and then enter the realm of politics to be a strong advocate for human rights.

I chose Concordia because I grew up in the Fargo-Moorhead area and had come to campus multiple times for various events such as the Knowledge Bowl and Science Olympiad. This allowed me to get to know the professors before I even officially toured campus. I also liked the small class sizes and professors who were willing to learn even if my perspective wasn’t one they usually heard. You don’t see many people of color in the community and people often have skewed views of certain religions, ethnicities, or cultures, but Concordia’s professors in departments such as religion, political science, and various sciences were willing to learn about differing perspectives than their own – more than many other faculty I met when visiting other colleges. That was the biggest factor for me in choosing Concordia. 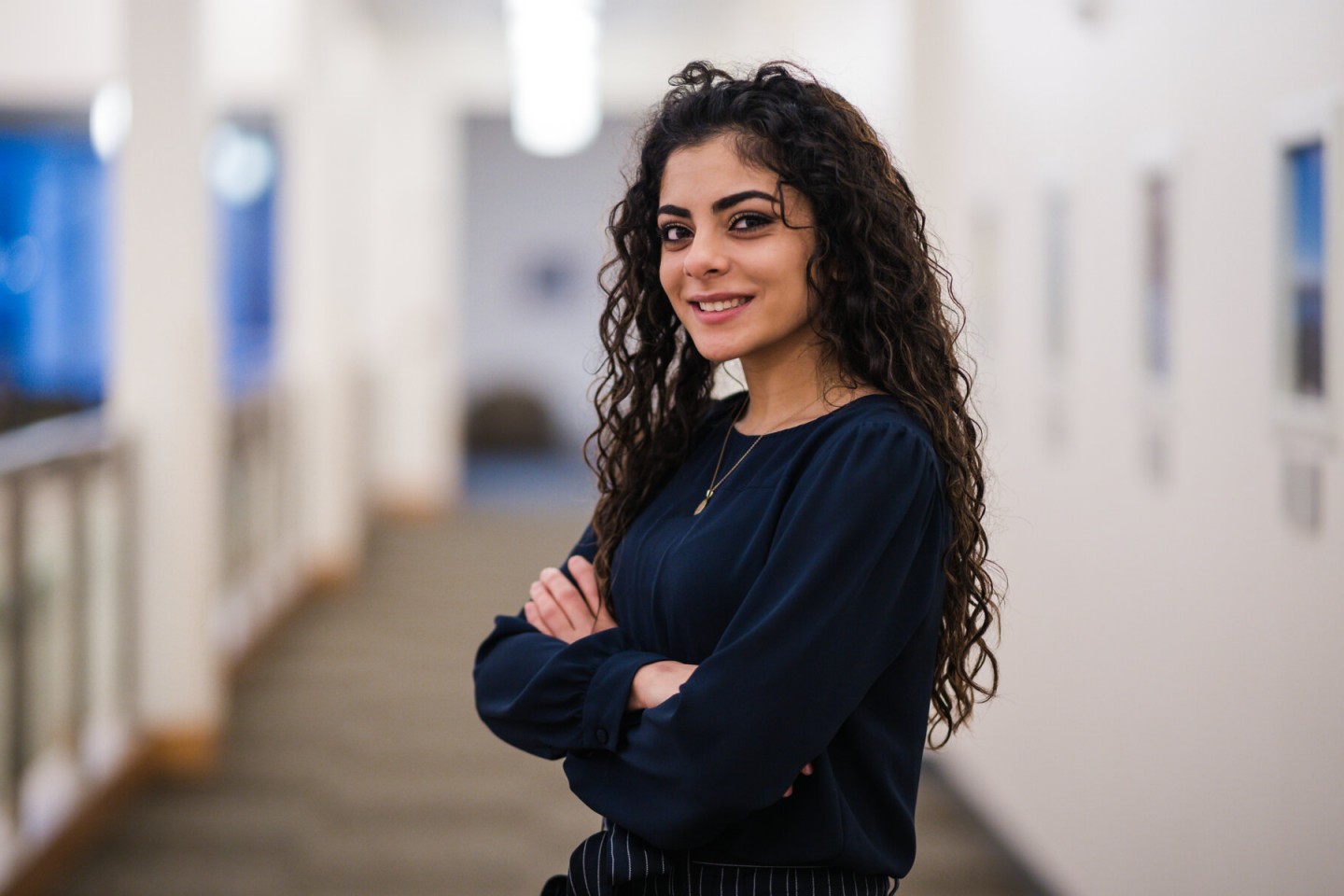 What interests you about political science and global studies?

My majors originally were biology and chemistry with a pre-med focus. I switched to political science and global studies not because of the courses or that I wasn’t doing well but because of some experiences while I was job shadowing in doctors’ offices. As I would wait in their offices, I would watch the news on TV and it frustrated me to see the political climate that we are in today and that I couldn’t directly make change happen in the areas I wanted as a doctor. I was frustrated for some patients who couldn’t pay their medical bills or afford certain surgeries. I decided that if I pursued politics and pre-law that I could make a difference. I don’t want to say doctors don’t make a difference, but I have spoken with many doctors who are also frustrated with different policies and the healthcare that’s enacted in the United States that they have no control over. That was my determining factor to switch majors. With so much difference in the world currently, I realized that I would be better suited to directly affect the policies that have affected many people in my community. We are so polarized with almost every issue becoming political. Human rights should not be a political issue much like wearing a mask has become political. How are we supposed to connect with one another when we are from very different areas of the world, religions, and cultures? I want to build bridges and connect people along with making change for people of all backgrounds.

I can’t say I have a specific professor that is my favorite, but I have three main professors that have been my advisors, mentors, professors, and friends: Dr. Jacqueline Bussie, Dr. Kenneth Foster, Dr. Leila Zakhirova. These three have been my mentors throughout my time at Concordia. It was hard for me to be at Concordia at first because of the discrimination and racism I have encountered in my life and I knew that I wouldn’t always be in the same room as people who have similar backgrounds as I do. These professors were very understanding of where I came from and that I was trying to abide by two cultures – being Kurdish and American at the same time. They understood that I was trying to fit into these two different worlds. Often, people would see something that I wasn’t. They only see the color of my skin and not necessarily who I am. These professors got to know who I am on the inside and not just what I look like.

What activities are you involved in on and off campus?

On campus, I am an attorney on the mock trial team. I am a member at large in the Student Government Association. I am a community lead team member in Better Together. I have been a student ambassador in past years but am unable to now in order to study away in Washington, D.C., with the Lutheran College Washington Semester program. I am also active in the Campus Democrats student organization.

Off campus, I organize events such as Black Lives Matter demonstrations in the F-M area and am active in advocacy work on Capitol Hill. I also have worked on various political campaigns, including helping Laetitia Hellerud on her run for State Senate in District 22, which serves West Fargo. 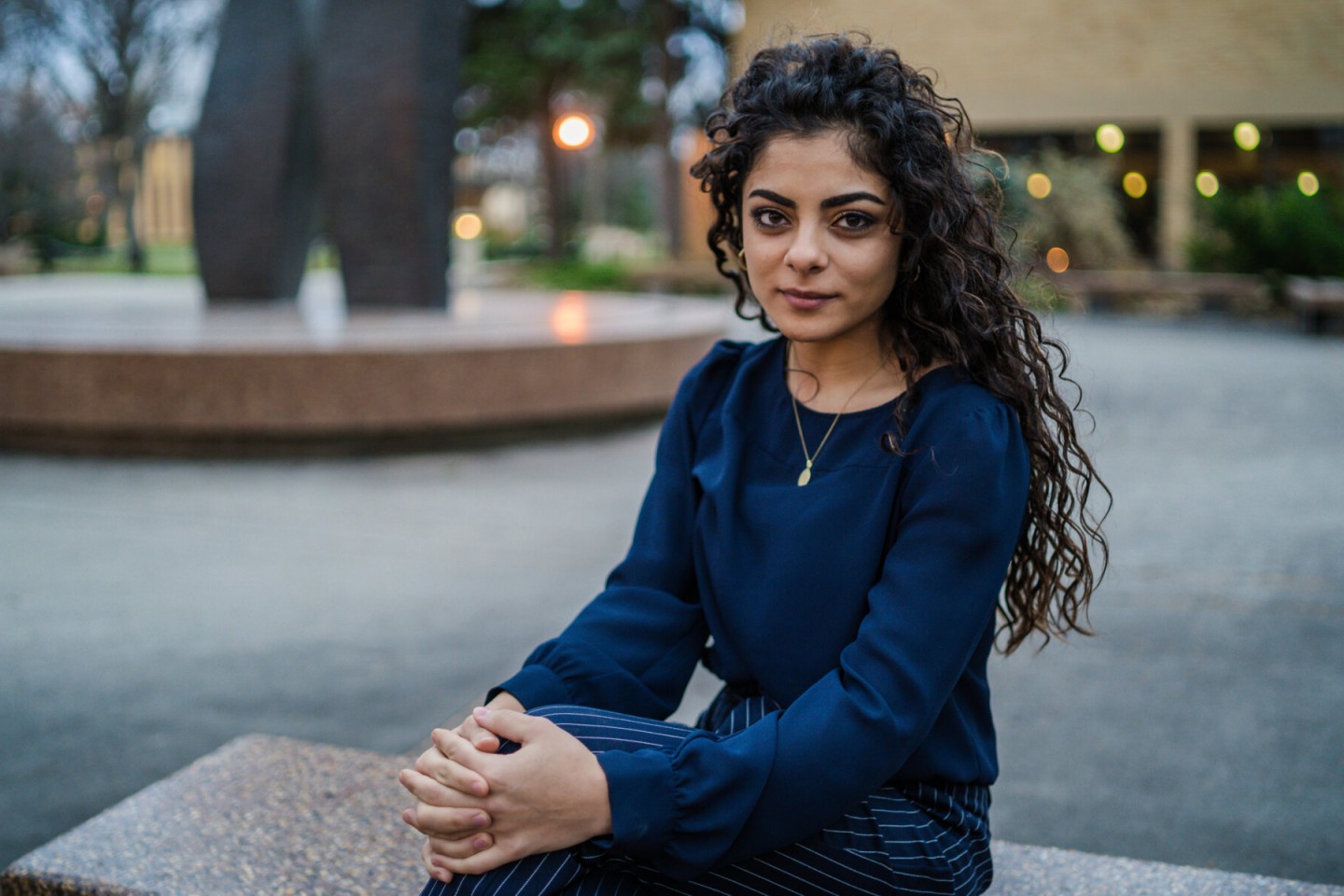 What are your responsibilities as an Interfaith Scholar?

The role of an Interfaith Scholar isn’t specifically defined but is more about being the bridge that tries to connect people. I like having deep conversations about religion, specifically relating to Christianity and Islam. I also enjoy talking and learning about the Jewish faith. I have group sessions to talk about the similarities and differences of our faith. Too often, faith is the element that divides much of our country. Right now, there is so much Islamaphobia and antisemitism in our country. How are you supposed to relate or talk to someone when they hate you simply because of what they think your religion is?

One of my main responsibilities is to simply talk with our Cobber community about faith. During the previous two semesters, I hosted groups of students to talk about faith, specifically many Christian and Islamic students who didn’t know a whole lot about other faiths. I was happy to walk away knowing even more about religions much like many of my fellow peers who attended. It was a great way to form a bridge between those students on campus.

Another responsibility of being an Interfaith Scholar is to educate our campus community as well as the greater Fargo-Moorhead area. Hosting community events at mosques, synagogues, and churches for students to attend at places they wouldn’t usually visit opened their eyes to the broad faith network in the area. For a week, I traveled to churches across the United States with a group of people who also wanted to learn about how religion and politics intersected in our country.

Why is interfaith dialogue important?

Beliefs and values are very much tied to who you are as a person, which is often based on your religion. This is something I have had many conversations with Dr. Bussie about. If you understand someone’s religious aspect of their beliefs and values, you’ll have a greater understanding of their behaviors associated with different actions they take. When people make certain actions, we often don’t understand and we simply criticize them right away without giving it a second thought. But many times their actions are a result of what their beliefs and values stand for, which is often rooted in religion. This is where interfaith dialogue acts as that mechanism for bridging religious differences.

What are you most excited about in your role as an Interfaith Scholar?

In the beginning, I was very excited to be the first Muslim Interfaith Scholar. There isn’t enough representation for people of other faiths on campus and that is an issue. Interfaith means trying to connect people of different faiths and if you only see Christian Interfaith Scholars, what is the perception for non-Christian students? Another exciting thing was to have an influential role in the interfaith discussions on campus. Students will take you more seriously when you talk about various topics in a role like this. When I would host the religious circles prior to being an Interfaith Scholar, I would sometimes be questioned with: “What position are you in that you have this authority?” Being an Interfaith Scholar doesn’t give me authority over others, but it gives me a stance to say, “Hey, I’m actually interested in this topic and I’m working on learning more so I know what I’m talking about.” I was really looking forward to organizing the keynote speaker for the Forum on Faith and Life, but the event was rescheduled for next year due to the pandemic. 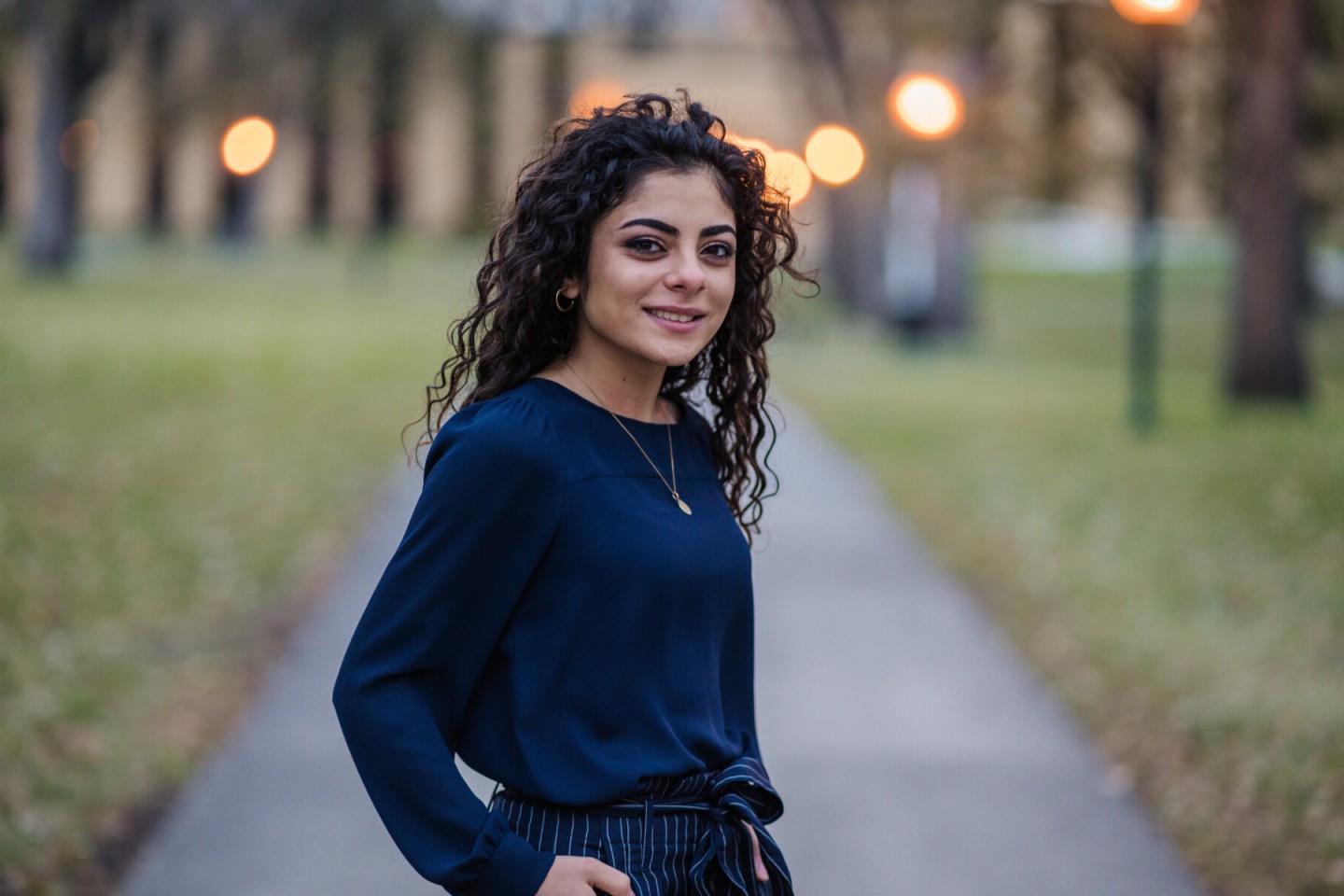 What opportunities has being a Community Achievement Scholar given you?

I actually was the first recipient of the Community Achievement Scholarship and helped set up the scholarship for other students. When I would come to campus as a high school student, I talked with the admission reps and explained that there wasn’t a scholarship for people of color who live in this community to attend Concordia if it was out of their price range. There are so many bright students in the community who would thrive from a Concordia education but simply can’t afford it. My admission rep at the time then talked with college administrators and made this scholarship possible. Any four-year educational institution like Concordia is a major investment that many local families of color can’t afford. I was able to bring this scholarship opportunity back to my high school and encourage students to apply for it who may otherwise end up at a community or technical college because the cost of a four-year education was too expensive. I am grateful for the opportunity to attend Concordia as a result of receiving the Community Achievement Scholarship and I am hopeful to see future students have similar opportunities as I have.

What advice would you give to a prospective student?

College is a journey, so don’t rush anything. Too often, students arrive on campus and believe they need to choose their major, have a plan for the rest of their life, and get everything in order. It is a journey and you’ll meet people along the way. Be open-minded. These are the years when you’ll be learning the most not only because of the curriculum that’s provided but from the people you’ll meet. Be open to talking with members of the international community, domestic students of color, and different religious groups on campus. Students at other colleges may not have access to groups like this and you don’t have to go far at Concordia to meet someone who has a different culture or faith.