Reyna Bergstrom ’18 won the title of Miss North Dakota at the competition in Williston, N.D., in June and will head to the 100th Miss America Pageant in December.

But this isn’t Bergstrom’s first trip to the competition. She was runner-up in 2019 and second runner-up in 2015 and 2016. She became involved during her first year at Concordia after a friend recommended that she compete in a local competition to earn scholarships. The Miss America Organization is the nation’s largest provider of scholarship assistance to young women and Bergstrom said the scholarships are what drew her in. Women between the ages of 18 and 25 are eligible to compete in any local competition, whether she is a resident in the state or attending school in the state. If she wins a title, she can move on to the state competition.

After the 2016 competition, Bergstrom focused on college and earning her degree, but in 2019 she decided to compete once more. Her intent was that 2019 would be her last time competing.

“I got first runner-up to Hailey Wolfe two years ago and was pleased with that outcome,” Bergstrom said. “At that point, I figured it just wasn’t meant to be and I was at peace with that reality.”

However, Bergstrom likes to have projects and goals to work toward so in the winter of 2020 when Bismarck was looking for more candidates, the local director reached out and convinced her to compete one more time. Even with the scholarship opportunities, North Dakota is always on the lookout for candidates. Bergstrom decided that she didn’t have anything to lose and three more months until the state competition didn’t seem long, so she signed up to compete and won the local title of Miss State Capitol. Three weeks later, COVID-19 restrictions were put in place, which canceled the 2020 competitions. Three months turned into 15.

Technically, a candidate can’t be older than 25 at the Miss America competition, but Bergstrom and others across the U.S. were grandfathered in with the cancellation of 2020’s events. Bergstrom is now the oldest Miss North Dakota as she’ll be 26 for most of her reign. 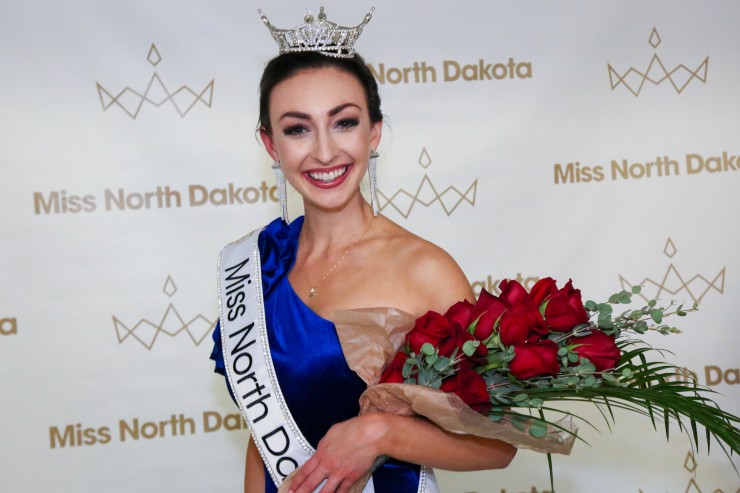 In the meantime, she’ll be busy getting ready for the Miss America competition in December. Bergstrom says that 35% of the competition is the talent portion and 35% is interviewing, so she’ll be concentrating on making sure she’s strong in both those areas. In addition to preparing for the pageant, Bergstrom will have a full schedule for the year. She’ll be taking part in community events, the North Dakota State Fair, and the Medora Musical. She will also begin a tour this fall of elementary, middle, and high schools speaking on her social impact initiative, “The Influencer Era: Impact Beyond the Screen.”

“My social impact initiative is centered around the idea of ‘how we intentionally connect with one another both in digital spaces but, even more importantly, in person,’” she said. “It’s a message promoting face-to-face connection, a message that I feel is especially relevant as we emerge from the pandemic.”

Bergstrom says she is thrilled to be a part of Miss America this year as the organization celebrates its 100th year. The competition will take place in Connecticut this December and be aired on NBC. Additionally, she’ll be taking part in a 100th year celebration in September that will include designing a costume for the historic Show Me Your Shoes Parade.

“I am especially thankful for my time at Concordia, both as a student and as an employee. As a student, professors Dr. Stephanie Ahlfeldt, Dr. Cindy Larson-Casselton, and Dr. Holly Janz were instrumental in helping me to prepare and now, as an employee, I’ve felt supported by my team in communications and marketing,” Bergstrom said. “I am so appreciative to the many Cobbers who have reached out these past few weeks and I am excited to not only represent North Dakota on a national pedestal (that being Miss America) but am proud to represent Concordia, too. Timing is everything in this life and I’m thrilled that my time is finally now!”