Athletic activities have always been a staple at Concordia College. Since the founding of the school in 1891, officials believed physical activity was needed to keep students performing at their best. The appearance of athletics at Concordia, however, has changed dramatically from the early years to what students and alumni now know.

In the early days of the Concordia Academy, athletics did not consist of organized sports. Activity tended to consist of “one half-hour of supervised play… each evening except Sunday and extra play was permitted on Saturdays.”[i] Students, both the young men and women, would play games such as London Bridge and Pig in the Parlor. However, when Concordia began a four-year college program and those college students began to outnumber the Academy students, the play hour was discontinued. Despite the play hour being discontinued, students were not discouraged from seeking other forms of physical activity. By 1903, students were already beginning to work toward organizing team sports such as baseball, football and basketball. Despite some hesitancy on behalf of the college administration related to student-organized sports, students were still encouraged to seek physical activity. The November 1911 edition of The Crescent reported that Bertina Thompson “has been encouraging the young ladies to take long walks … Nothing can be of greater benefit to a young woman who spends most of her time indoors than to go out and enjoy the fresh invigorating air.”[ii] While informal activity was still highly encouraged by the college administration, students worked hard to organize official athletic teams. 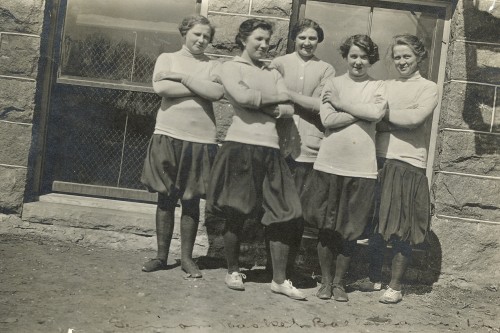 The earliest attempt by the student body to organize an athletic team was in 1903. Baseball was the students’ game of choice. Support for the team grew among the students, but control of it eventually went to a faculty member “when enthusiasm for the baseball club … led some to neglect their studies …”[iii] A rule was instituted that any student whose average dropped below a 75, and later, when the rule was revised, an 85 percent would be banned from participating. J. P. Hertsgaard was then hired as the first coach with an official athletics director being hired in 1908[iv].

Baseball was not the only sport to face difficulties in the early years of Concordia. Students first attempted to introduce football in 1909, but did not gain enough support until 1912 when enough young men joined the team for them to begin learning the game. In 1913, there were enough students for two society teams to compete against each other. However, football continued to face difficulties. In the early years of American football, the sport was overly rough leading to a collegiate of Lutheran presidents to seek a stance on having the game in colleges[v]. Concordia’s President Aasgaard voiced his support of the game, believing that it prepared young men for the challenges that they would face in life.

Despite some initial difficulties, Concordia’s athletic department expanded quickly. By 1911, the director of athletics supervised gymnastics, track, tennis, baseball and basketball teams. Football would eventually fall under the supervision of the director of athletics as well. In 1911, Concordia joined several Moorhead and North Dakota normal schools in the Interstate School Conference[vi]. Concordia was able to benefit from a set match schedule, to standardized uniforms and more. From this moment forward, Concordia athletics continued to grow at an explosive rate to become what students and alumni know today.

[i] Grinnaker, Vernon Finn. Stand Up and Cheer! The Story of the First 100 Years of Men’s Athletics at Concordia. Unpublished. Page 6.

Members of the women’s basketball team, 1913