Rural broadband is a hot topic these days with many in rural areas not having access to high speed internet services, but Erich Hennig ’97 and his wife, Erica, have been working to change that. Together they started Zumacom, high speed wireless internet for Montezuma County and southwest Colorado.

After graduating from Concordia, Hennig moved to Boulder where he met his wife. They lived in Alaska, Northern California, Phoenix and Durango before moving to Dolores, Colo., located in Montezuma County. They discovered how poor the internet service was there and decided instead of just complaining about it, they’d do something to change it.

Hennig had 20 years of experience working in the IT field and he built their first radio tower in their backyard. They sold the extra bandwidth to their neighbors and Zumacom was born. Sites are connected to fiber or via licensed microwave backhaul and the facilities transmit signals picked up by a radio mounted on the outside of the client’s house.

“Zumacom was created to help bridge the ‘digital divide’ or the lack of modern internet service availability that is prevalent in the rural area of southwest Colorado that we call home,” he said.

Zumacom provided wireless internet to its first customer in February 2017. Since then they’ve slowly expanded the coverage area, using existing fiber-optic lines and cellphone towers. The Zumacom network currently provides service to three counties in Colorado and one resident just across the state line in Utah. 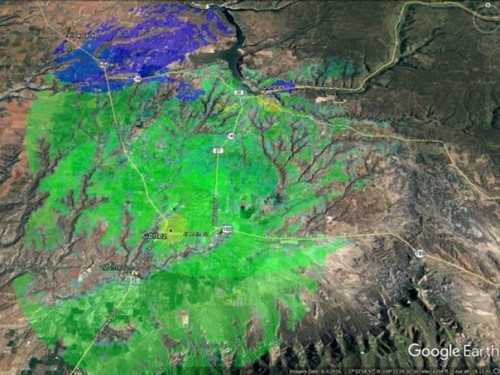 “Since its inception, we have seen massive growth and are currently helping families continue to prosper in a rural setting by providing internet service to their homes and farms that allows for telecommuting, home schooling, online college study, online livestock auctions and, of course, Netflix,” he said.

Zumacom has made a strong effort not to “oversell” its network so the Hennigs can maintain an adequate performance level for their current customers. They limit the customer count where necessary to maintain a good service level for all clients and, in some cases, have had to turn away business.

“This completely slays the business lobe of my brain, but it is a key differentiator between Zumacom and everyone else,” Hennig said. “We seek to be the provider of choice in our service area, and thus far we seem to have been successful in that effort based on feedback from our customers.”

The Hennigs work out of their home west of Dolores, where Erica runs the business and marketing side and Erich is in the field. They plan to expand Zumacom’s wireless infrastructure and the network to support as many customers as they can while they grow.

Image: The green shows Zumacom’s initial coverage area and the blue denotes where the company has expanded.