A number of buildings have been erected and razed, each leaving an imprint on Concordia’s history.

The Concordia bookstore has occupied many locations in the College’s history. Its first home was President Aasgaard’s former garage, originally built to house his Model T Ford. In 1921, the structure was remodeled for the bookstore; however, the building was dismantled in 1939. The bookstore soon after moved into the “House without a Name” otherwise known as the Home Economics Building, Bookstore, and Student Center Building, which was located south of Old Main and immediately northwest of where Lorentzsen Hall stands today. 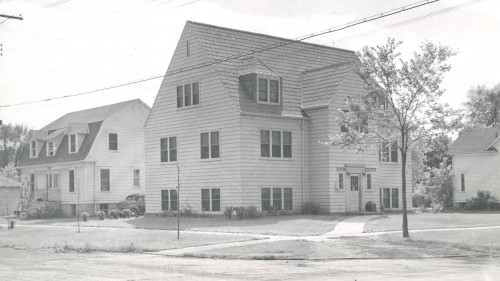 The bookstore occupied the first floor and students flocked there for treats and “indispensible afternoon coffee” according to the 1940 Concordia College Record. Home Economics remained in this building until 1980, and the structure was razed in 1986.

A new structure was built for the bookstore and post office in 1954, which was located north of Memorial Auditorium. When Livedalen and the Normandy were finished in 1962, the bookstore and post office moved into this new facility. At that time, the education department moved into the former bookstore until 1976 during which time the structure was called the education building. The building was demolished in 1980.

One of Concordia’s first buildings was the gymnasium built in 1915 southwest of the current Academy Hall. With an influx of students after World War II, the gym served as a short-term dormitory, euphemized as “Paradise Hall” by its residents. Memorial Auditorium was completed in 1952 and athletic activities moved into the new facility. In 1953, the former gymnasium was remodeled as an art center. The structure was razed in 1991.

World War II created a need for more dormitory and classroom space beyond “Paradise Hall.” Cobber Hall, built in 1946 from army barracks materials, was used as a men’s dormitory until 1951. The former “Boe’s Bunkhouse,” nicknamed after Victor Boe (the dean of men), was turned into classrooms until 1967 when the structure was razed. Cobber Hall stood where the 1970 addition of the library was built. The Cobber Barracks, also known as Veterans’ Court, Housing Units, and Veterans’ Cottages, were constructed in the fall of 1946 as one of three Moorhead initiatives of the Federal Housing Authority. Each of the 30 units had two bedrooms, a living room, small kitchen, bathroom, and a utility room and housed veteran families. The barracks were removed in 1961 to build Livedalen and Hvidsten Halls. 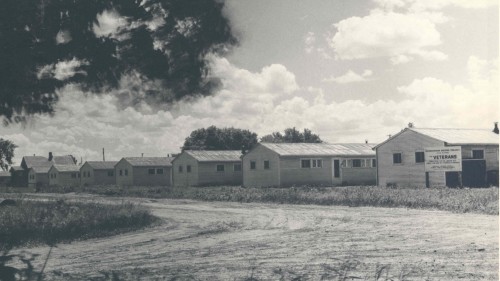 The Science Hall was also built during this time from Air Force hospital materials from Iowa. The structure was later known as the Biology Building and was demolished in the 1980s. It stood north of Memorial Auditorium. The building spree that occurred after World War II also required more energy needs, and a heating plant was built south of the gymnasium/art center in 1947 to meet them.

North Hall was another structure important in the early days of Concordia. 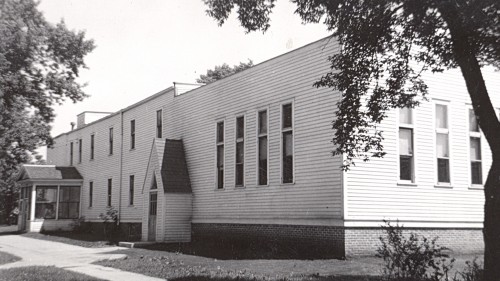 The structure was built in 1893 as Darrow’s Hospital – the first hospital in Clay County to have an operating room. Concordia officials purchased the building in 1919 at which time it was repurposed for a women’s dormitory until 1938 when Fjelstad Hall was completed. The structure became the music hall from 1938 to 1963 after which it was used for storage and a theatre workshop. In 1975, the building was demolished to build Bogstad Manor. Darrow Hospital was not the only hospital in Concordia’s history however. The College Hospital was built in 1910 near the former gymnasium/art center. In 1947, the Hospital was moved south of Old Main and later demolished in 1962 to build Lorentzen Hall.

Another interesting building in Concordia’s history is the Kevatron building. This structure, dedicated at the 1959 Homecoming, was built to hold an ion accelerator or “atom smasher” that was too dangerous and large for the physics lab. Four Concordia alumni were instrumental in securing the kevatron from Iowa State University who was replacing its small unit for a larger one. This building was later used as the Television Center before it was moved to its current location in the Olin Art and Communications Center.

While other buildings have come and gone during Concordia’s history, these are some of the buildings of the past that provided shelter and accommodations for many Cobbers.