Concordia alumni, students, faculty, and staff are not strangers to the “Hymn to Concordia.” New students are welcomed to Concordia with this song at convocation and graduating seniors are sent off with it at commencement. Written in 1931 for Concordia’s 40th anniversary, the song was a collaborative effort. Herman W. Monson, choir director from 1923 to 1937 and director of the School of Music from 1923 to 1939, composed the music. Borghild Torvick, a 1931 Concordia graduate, wrote some of the lyrics as part of an assignment and later submitted them for a poetry contest. Mrs. Paul A. Rasmussen, wife of a history and political science faculty member, completed the lyrics for the second stanza. The hymn was dedicated to Helga Fjelstad, longtime matron of the school and second mother to many Cobbers.

While “Hymn to Concordia” is one of the most recognized songs of Concordia, many others have been written during the school’s history. In 1931, Monson also authored and composed “Concordia Forever,” the college’s field song, which was dedicated to Cobber athletics. “Stand Up and Cheer” and “Wherever in the World You Go” have also been staple songs for Cobber coeds. The latter song, which appeared prior to 1940, was written for alumni to honor the school. The lyrics are as follows:

Wherever in the world you go

It’s borne on all the winds that blow,

From hearts that are brave and strong.

Though our college days are o’er.

We will always love our dear C. C.

As we did in days of yore.

Maroon and Gold will be the colors,

That will make our pulses throb;

Concordia to you, we will e’er be true: 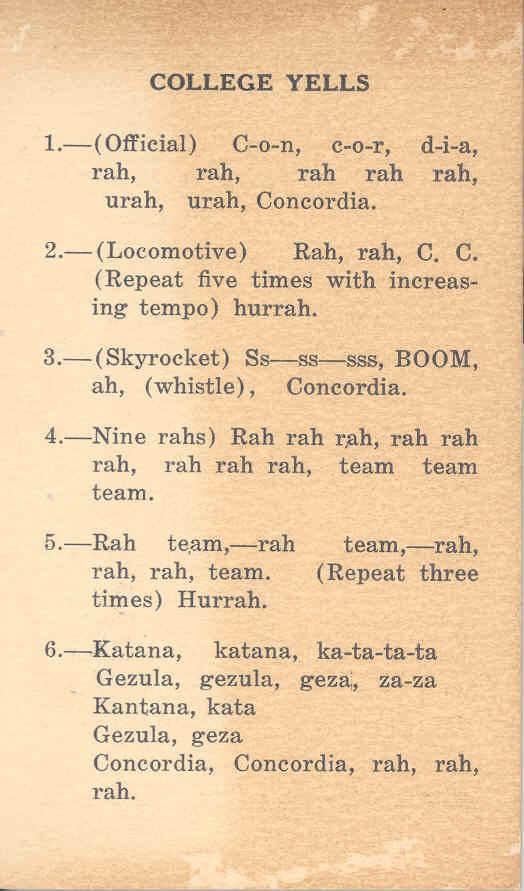 Songs were not the only way to show Cobber pride. The college also had a number of “college yells” for athletic competitions, the “official” one being “C-o-n, c-o-r, d-i-a, rah, rah, rah rah rah, urah, urah, Concordia.” From songs to yells to cheers, Cobber pride has been a part of the Concordia family throughout its history.