Greta Almlie ’24 likes to be busy. Between classes for her business management and communication majors, leading student organizations, and her job, Almlie is working with the City of Moorhead as a student representative for a task force developing a downtown revitalization plan.

Vote YES56560 is the group’s vision for the city’s future. It includes a new regional library and a community center with an indoor playground, a walking track, a coffee bar, and a makerspace.

“It’s been great to be part of this task force. It has really creative people on it who have a lot of passion for the city,” Almlie said. “It's kind of what Moorhead's about, a community that rallies together.”

For the past year, Almlie has been sharing her input with the task force as members constructed the plan. Mayor Shelly Carlson has known Almlie since she was in the eighth grade and said she chose the Cobber to join the task force for her ability to be candid, her critical thinking skills and maturity, and her enthusiasm for Moorhead, Almlie’s hometown.

“I knew I could count on her to bring her experiences of living in Moorhead to this project and articulate what a college student would want in a community center and library,” Carlson said. “Greta’s voice has been vital to the process, and I am thrilled she accepted the invitation to be part of this legacy project.” 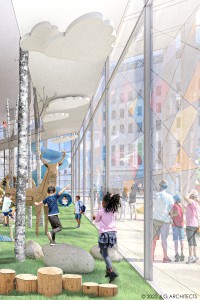 Another part of Almlie’s role is to help educate the students at Concordia, MSUM, and M State about the project. For the project to move forward, a 0.5% sales tax increase would need to be approved by voters.

“Now is the next step of how we can inform everybody,” Almlie said. “You’ll be seeing YES56560 signs everywhere.”

With Concordia’s new Engaged Citizenship core curriculum, Almlie sees the project as an example of ways students can become more involved in their communities. She encourages them to look for other opportunities where they can contribute.

“I love connection, so I love that Concordia always encourages us to be engaged. I think it’s so important,” she noted. “It doesn’t have to be at city offices — it can be anywhere.”

For Almlie, having college students involved in the community has additional benefits.

“They just bring an extra spark, a little liveliness that sometimes we need,” she said.

Learn more about the YES56560 project.