Dr. Olin Storvick was born in Chicago in July 1925. He received a public school education in Mason City, Iowa, until 1943 when he enrolled at Luther College. However, his education was put to the side when he enlisted in the Army and was deployed from 1943 to 1945. During his time in the Army, Storvick served in the Pacific Theater and Okinawa. He was awarded the Purple Heart after being injured by shrapnel. Upon his return from service, he finished his undergraduate education at Luther. He continued on to get a master’s degree from the University of Michigan in 1950 and a doctorate in 1968. In 1979, he was awarded an honorary doctorate honoris causa from Luther College, and in 2017 he was awarded the Doctor of Human letters honoris causa from Concordia College. 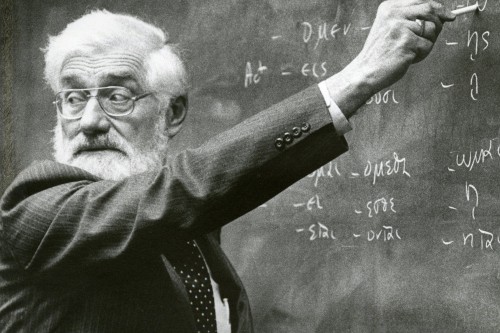 Storvick joined the faculty of Concordia College in 1955 and actively taught until he retired in 1995. He served as the associate dean of the college from 1979 to 1985 and from 1989 to 1990. During his tenure at the college, he taught Ancient History, Greek, the Greek New Testament, Classic Literature and Translation, and many other classical studies courses. Teaching was chief among his many interests and joys. He said “that even though he enjoys an archaeological dig, he is a teacher first and foremost.”[i] He was known among his students as being very supportive and caring. Former students would recall how he would see them in passing and take time out of his day to help them solve problems outside of the classroom. Storvick’s teaching was not limited to the confines of Concordia’s campus. He led many students to Greece and Israel on a variety of trips including archaeological digs and May Seminars. Even after his retirement, he continued to lead May Seminars to expose students to the ancient world. After his retirement, he served as professor emeritus and classicist-in-residence in order to still have a role on campus while being able to focus on writing. He stated “he feels a responsibility to write about all of his archaeological finds. He would like to publish them so the public can know more about his work.”[ii]

Archaeology was Storvicks’s main area of research outside of his duties as a teacher. In 1970, he was invited to participate in a summer dig at Khirbet Shema in Israel. He would go on to lead two groups of students to Khirbet Shema before becoming involved with the archaeological excavation at Caesarea Maritima. In 1973, Concordia joined a consortium of 20 American and Canadian universities and colleges under the direction of Dr. Robert Bull that was conducting a dig at Caesarea Maritima. Storvick would, ultimately, lead 12 trips to Caesarea Maritima that included Concordia students. While on one of these digs in Caesarea Maritima in 1993, Storvick and his group of students came across a grindstone. Upon opening the grindstone, they found 99 gold Roman coins that dated to the fourth-century B.C.E. This find attracted both national and international attention due to the unique nature of the items. He stated that “most hordes have been discovered accidentally…I think that only one other horde like this has been found on a dig in Israel.”[iii] He served on the executive committee and as the chairperson of the publication committee on the project, which ultimately ended in an exhibit at the Smithsonian Museum.

Storvick passed away on June 16, 2018. However, the influence he had on Concordia and its students will live on. For the college, his influence continues in the endowed chair of classical studies that bears his name and in the toast during the 125th Anniversary celebrations to “the Concordia that is yet to be!” His influence on students’ lives can be seen in the advice he gave while a professor, the care he displayed while teaching, and the passion he had for his field.