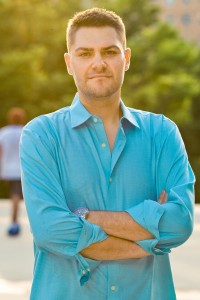 Percussionist and Grand Forks, N.D., native Kyle Maxwell-Doherty ’08 found success as a professional musician in New York City, most recently as a pit musician for the hit Broadway musical “Hamilton,” which follows the life of founding father Alexander Hamilton.

After moving to New York in 2013, Maxwell-Doherty took the advice of his Concordia teachers and mentors to heart: take every audition, attend as many concerts/performances as he can, and meet as many players as possible.

“My opportunity to play in ‘Hamilton’ came from an unexpected place,” Maxwell-Doherty said. “I was riding a coach bus to Gillette Stadium to perform with the New England Patriots drumline. Sitting next to me on the bus was a colleague in the drumline and we struck up a conversation about what was new and exciting in our lives.”

This contact – established through Maxwell-Doherty’s initiative and happenstance – would result in an opportunity to be a substitute percussionist for a musical in development – a rap musical about one of the founding fathers. You know the one.

“Fast forward four months and I played my first show with the [‘Hamilton’] company while they were still off-Broadway at The Public Theater,” he said. “And I have been subbing for both the Broadway and touring productions since.”

The overwhelming swell of excitement around the 11-time Tony Award-winning production has made Maxwell-Doherty’s experience an unforgettable one. But with the show’s runaway success comes a demanding schedule and high expectations.

Each production performs for audiences more than 400 times a year and, as a substitute musician, Maxwell-Doherty could be called to perform with any of the five shows when a percussionist takes a leave of any length. And, of course, once he’s there, the work isn’t easy.

“The production schedule can be very challenging at times, especially the weekends,” Maxwell-Doherty said. “On the weekends, we have five performances in 50 hours.”

Still, despite the rigorous schedule and the demands of frequent travel and time away from home, Maxwell-Doherty recognizes that the opportunity to work on this groundbreaking production is a special one.

“It has been an experience like nothing else I have ever been a part of,” Maxwell-Doherty said. “The level of musicianship day in and day out always makes me want to work harder, and the professionalism and attention to detail from every department and every member of the organization inspiring.”

In sharing his work and that of the company, Maxwell-Doherty recognizes that they’re also sharing a uniquely American story – one that he hopes will resonate with audiences all across the country.

“[‘Hamilton’s’ popularity] has brought an entirely new audience to our musical, other musicals, and the arts in general,” Maxwell-Doherty said. “And while all the hype, memes, and fandom that came with the show are exciting, none of that amounts to how the actors and company members feel about the work they are doing on stage. We are all really hoping to change audience members’ lives night after night. It’s a lofty goal admittedly, but one worth striving for.”

Maxwell-Doherty will continue to perform with the production as a substitute, but the recently closed Minneapolis production was especially meaningful to him. It was both a homecoming to the region and an opportunity to perform for a mentor who helped start him on the path he follows today.

“The the company made in Minneapolis was incredibly fulfilling for me on multiple levels,” Maxwell-Doherty said. “I saw countless Cobbers in and outside of the theater and even had the great privilege to perform for my very first music teacher one evening. I was glad she could be 'in the room where it happens,’ because in a very real way I spent years in a room where SHE made it happen.”