The Roma Tre Orchestra will perform the world premiere of a piece by Concordia junior Frederick Robin, a music composition major, Nov. 25 at Teatro Palladium in Rome, Italy. Robin collaborated with the orchestra and its artistic director, Valerio Vicari, on “Rondo in A Major.”

Robin’s piece will open the concert “Africa! On the Occasion of the World Day for the Elimination of Violence against Women,” but it’s not just about music to your ears; it’s a multimedia performance. “Rondo in A Major” will be the orchestra’s first performance “fusing olfactory art and orchestral music” because Robin is also a perfumer. Attendees will smell scented strips of paper while listening to the composition.

Robin explains the concept of the olfactory music experience in a press release on his website and says that “the idea behind the project is to explore just how far you can bend the audience’s sense of familiarity and surprise inside these interwoven musical and olfactory structures.”

Robin’s piece is part of a larger program of musical works including pieces by Russian composer Dimitri Shostakovich and Italian composer Fausto Sebastiani. Though Robin didn’t compose the work specifically in relation to violence against women, he has decided to allow the audience to interpret it however they want within the context of the whole concert. 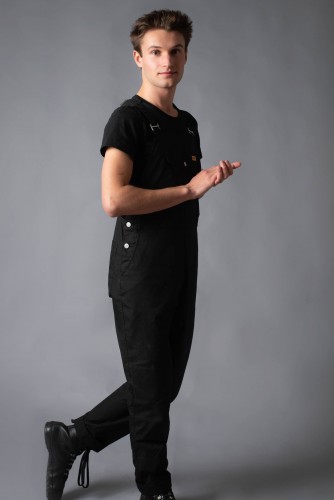 Robin said he started composing loosely as a child. He was taking piano lessons at 4, and by age 10 he had started to manipulate what was on the page.

Piano is his main instrument, but he sings in Concordia’s Chapel Choir and is just starting to learn cello.

Robin said over the course of the four years at Concordia in the composition program, students alternate working with composition teachers. Robin’s mentor for the “Rondo” piece was Dr. Daniel Breedon, professor emeritus, and he currently studies with Dr. Doug Harbin.

Harbin first met Robin when he visited Concordia to inquire about what a high schooler should do if they were interested in studying composition at the collegiate level.

“My colleague, Dr. Steve Makela, and I suggested that he find a composition teacher and begin taking private lessons,” Harbin said. “Soon after, Frederick reached out to me, and we started lessons while he was a junior in high school.”

Robin also took advantage of the Postsecondary Enrollment Options (PSEO) program through the state of Minnesota to start attending Concordia during his senior year of high school.

So how did a Midwest student attending Concordia College connect with an orchestra from Italy? Social media. Robin said he believes an algorithm of social media recommended he connect with the director. After they started talking and Robin learned about the orchestra, Vicari suggested the orchestra perform one of Robin’s pieces. They conversed by messaging and spoke in person when Robin was in Rome this past summer exploring graduate schools in Europe. Robin was able to see the Roma Tre Orchestra perform, and he and Vicari also took in a Concordia Choir concert together in Rome.

“We knew we wanted to include my piece in one of the orchestra’s performances and there were a number of different possibilities we discussed, but this November concert is the one that worked the best for all parties,” Robin added.

And where did perfuming come into play? Robin said he started studying perfumery after founding the olfactory lifestyle brand Studio FSR with his mom when he was 14. Studio FSR makes candles, lotions, body butter, and several other products. Robin says the business now serves international clients and more than 40 boutiques across the United States.

Harbin said Robin is the only composition student he has ever had who has integrated scent with music. It was showcased in their most recent student composition recital (Oct. 3) with Robin’s work, “The Night-Blooming Waterlily,” for string quartet and piano where small, scented paper strips were distributed to the audience before the piece was performed.

Harbin also said Concordia’s composition faculty often tells students that, after they graduate, they will have to create their own performance opportunities; thus, it is important to start creating/seeking musical opportunities now and Robin does exactly that — he spends considerable energy marketing his music and his fragrances on his website and on social media.

Harbin was delighted (but not too surprised) to hear that Robin had used social media to make connections and obtain a commission from an orchestra in Rome.

“An exceptionally motivated student, Frederick comes into each lesson with an agenda and a great amount of material that he has composed on his own throughout the week,” Harbin said. “Frederick has big dreams and I enjoy witnessing him relentlessly pursue those goals through hard work and determination.”

The Rome premiere isn’t Robin’s first multimedia project. In 2021, Robin and a local artist in Detroit Lakes, Minn., presented a multimedia performance at the Historic Holmes Theatre in Detroit Lakes to address the effects of COVID and the pandemic on the artistic community.

Robin added that he believes student recitals are important not just because the students love when other students, faculty, families, and the community come to their recitals, but because he sees them as opportunities.

“Personally speaking, a lot of connections have been made after recitals talking about music. That’s really where the sparks ignite,” he said. “So come to the composition recitals to support your artists and friends!”

Harbin added, “Frederick’s premiere is a wonderful example of a Concordia student who has taken action to move beyond the classroom to generate his own opportunities and to engage new communities through his music.”

Robin is excited to be traveling back to Italy at the end of November for the premiere, but it won’t be his last European visit.

“I believe it’s important to learn about the world outside the classroom, so I’ve been exploring a few different places,” he added.

His travels have encouraged a desire to live, learn, and possibly work in Europe. He is hoping to complete a master’s degree in composition and then a doctorate possibly in the philosophy of music. At some point, he expects to teach at a university and he’ll always be composing, but first he’ll be in the audience for the world premiere of his work in Rome.