Dr. J. Elijah Bender, assistant professor of history, was tapped as one of the experts involved in the Netflix original docuseries “Age of Samurai: Battle for Japan.”

The Toronto-based production company that produced the series had already completed a number of historical documentaries and had an interest in doing one on the samurai. The producers started contacting people based on the English-language research they found. One of those contacted was Bender’s graduate advisor, Dr. Luke Roberts at the University of California-Santa Barbara, who gave them Bender’s name along with a few other recent grad students.

After reading Bender’s thesis and dissertation, which was on this topic, they contacted him to ask if he’d be interested in the project. The team had a list of topics they wanted experts to discuss and asked which ones Bender could speak on. He was able to check off about everything on their list and, after a phone call with one of the producers, he was flown to New York for a night and a two-hour interview. But that was two years ago.

“This was in March of 2019 and I didn’t hear anything for a long time, so I thought the project had gotten nixed because of COVID,” Bender said. “But then about a month ago one of the producers emailed me and said ‘we’re gonna be on Netflix soon; here’s some PR you can share.’” 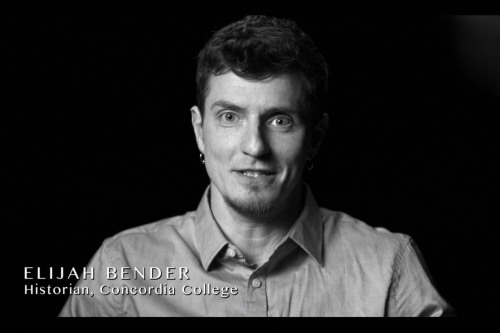 “That was exciting,” he said. “I’ve never had as much interest from friends and family about my research before. All it takes for your family to find your research interesting is to get on Netflix.”

Bender believes the producers and their team were already fairly knowledgeable about the basic historical context and they mentioned some of the things that he had written in graduate school. For the interview, there was an outline where the questions required specific responses and the real basis of the narrative came from those interviews. The series doesn’t use much narration but instead interspersed cuts of the interviews seamlessly with reenactments.

Along with Bender, a number of historians from the University of Pennsylvania, Marquette University, Michigan State, and the University of York in the U.K., among others, were included in addition to independent scholars not affiliated with a university.

Though Bender is in both episodes 1 and 2, his area of expertise is mostly in episode 2. Episode 2 highlights when the head of the powerful Oda clan, Oda Nobunaga, comes up against Takeda Shingen and, later, his son Takeda Katsuyori, a clan that was a very significant threat with a formidable army.

“My dissertation is about that part of Japan and the influential Takeda family, so that’s where I was most useful,” he said.

Bender teaches East Asian history and Japanese history. A number of his regular history classes also overlap samurai history quite a bit, but the closest thing he teaches that relates to the docuseries is an Inquiry Seminar on samurai history.

Bender was not originally interested in premodern Japan but, after taking a class on East Asian history in college, he was fascinated by it. He hadn’t had a lot of exposure to it other than family stories about the Pacific War in which both his grandfathers were members of the Navy.

“I was just really kind of blown away by this whole area of the globe that l almost knew nothing about,” Bender said.

His career path required a lot of work since his research required him to know three different versions of the Japanese language – modern, early modern, and medieval. It was really time-consuming and Japanese is not an easy language for English speakers to learn. He said premodern languages are always difficult, but premodern Japanese was especially obtuse.

Netflix’s “Age of Samurai: Battle of Japan” was released the end of February and was in the top 10 the first week.

“I’m getting messages from friends that I haven’t seen for a long time asking ‘did I just see you on Netflix?’” Bender said. “It’s been fun!”