Dr. Jonathan Clark, professor of German, has been working on a project for about seven years that will result in the publication of his book, “Crossing Boundaries. The Story of the Witch, Barbara Kurzhals (1589-1629),” in 2021. Clark has used sabbaticals, summers, and a year off for research.

“Because I know that one semester is never enough time to work on this type of research, I bit the bullet and took a year off,” said Clark. “During that time, I spent about a month abroad.”

Clark got interested in the subject of witchcraft when he was a grad student at Berkeley working as a research assistant for Dr. Thomas Laqueur, who was working on a book about the image of women’s bodies. Clark came across texts on witchcraft and taught courses that included a section on women and witches.

“But it really wasn’t until teaching an Inquiry Seminar at Concordia that the seeds for writing this book were planted,” Clark said. “Because the complete trial record of Barbara Kurzhals was available, I began to use that as an example of various aspects of the persecution of women as witches for my students.”

Clark teaches the subject of witchcraft once in the while through a two-credit course in German, which will be offered this spring.

“We discuss the roles and views of women and how that contributes to the making of a witch,” he said. “I want my students to consider the abuse of women within this context, including torture and death, but especially how attitudes toward women allow for this. It helps them to consider even more contemporary society and issues surrounding violence against women.”

Clark spent most of his time abroad in Southern Germany: Munich, Augsburg, and in the area where Kurzhals lived: Reichertshofen and Geisenfeld.

“I really didn’t have a good sense of what life was like back in the early 17th century, so I arranged with a local historian to take me around Geisenfeld,” he said. “As it turns out, I was met by the historian, Hans Shranner; the Bürgermeister (mayor), Christian Staudter; and a reporter, Maggie Zurek.”

Zurek encouraged him to be persistent about looking for the original trial record in the church archives in Reichertshofen, which he found after two days of searching. She and others also helped Clark to define even further what this project was about – giving a voice to a woman who would not otherwise be able to speak for herself. 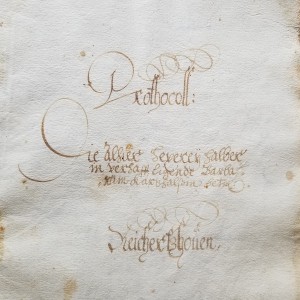 Clark said as far as Germany goes, witches were the terrorists of the 16th and 17th centuries – blamed for everything from disease to inclement weather (Little Ice Age), infertility, and the death of children and livestock. Impugning the church was also a problem, especially in the area he writes about since it was forced to convert from Lutheranism to Catholicism in 1614.

“Of course, all these things were related,” he added. “Witchcraft persecution was going on in German-speaking areas already by the late 15th century, but only toward the mid-16th century did it really take off. Persecution used to be directed at ‘heretics’ and women became the new heretics in their association with Satan. Some see the effects of the Little Ice Age – poor crops, colder temps, more disease, more miscarriages – in conjunction with the greatest number of witchcraft persecutions. Plague/disease – chicken pox, measles, mumps but also bubonic plague – was a constant even into the 17th century.”

In Zurek’s story in the newspaper Pfaffenhofener Kurier, Clark was quoted as saying the Little Ice Age caused misery everywhere “and people were looking for someone to blame.” He also said that according to the trial documents Kurzhals, under torture, “confessed to the most incredible offenses and named 43 helpers.” Her crimes included fornicating with the devil, poisoning her own seven children (who died from smallpox), digging up and eating children’s corpses, and transforming into other beings such as a cat. According to Clark, Kurzhals was given the grace of being beheaded before being cremated – had she denied it, she would have been given over to the flames alive, as was customary at the time.”

“Some of the witch finders came over to the colonies and wreaked all sorts of havoc,” Clark said. “Of course there were preachers who also aided in the hysteria. Where the Salem witch trials had approximately 200 accused and 19 executed, in German-speaking areas, the current belief is that about 50,000 were killed, about 85% of these were women."

Clark finished his book this year and is currently editing. He hopes to “give the woman condemned as a witch a voice so she can tell her own story.”