Roald Amundsen, famous for discovering the South Pole, came to Fargo in 1927 to give a lecture about his adventures. This lecture left a unique mark on Concordia.

Captain Amundsen was born on July 16, 1872, in Borge, Norway. Graduating with honors from , Amundsen decided to pursue his dreams of exploration instead of a career. To do so, Amundsen relied on the wealth from his deceased parents, who had been successful in the shipping business.

Amundsen’s success began in 1905 when he made the first successful voyage around the northern coast of North America via the . By 1909, Amundsen had set his sights on the North Pole, which was defeated after it was discovered by another explorer. Amundsen then decided to pursue the South Pole, which he discovered in 1911. Despite these successes, “The Last Viking,” as Amundsen was called, never gave up on his dreams of seeing the North Pole. He tried four times to accomplish his aim but did not have success until he came to for a lecture tour to earn income for his expeditions. While the lecture tour did not prove as successful as he had hoped, Amundsen did meet Lincoln Ellsworth who provided financial assistance for Amundsen to accomplish his ambitions.

Amundsen was greatly concerned that his explorations contributed to scientific knowledge. The Amundsen-Ellsworth expedition was no different. This expedition was the first to travel from Europe to via the North Pole in an aircraft. To do so, Amundsen and Ellsworth purchased a dirigible from the Italian government and reconstructed it with the guidance of Colonel Umberto Nobile. The aircraft was named Norge I and measured 325 feet in length. Amundsen and colleagues departed on May 11, 1926, and landed at the North Pole at 2:30 a.m. on May 12. On their voyage, they encountered the Pole of Inaccessibility – the most difficult point of the earth to reach. Some of the first motion pictures of the North Pole and surrounding regions were taken during this expedition that cost $750,000 in sum. 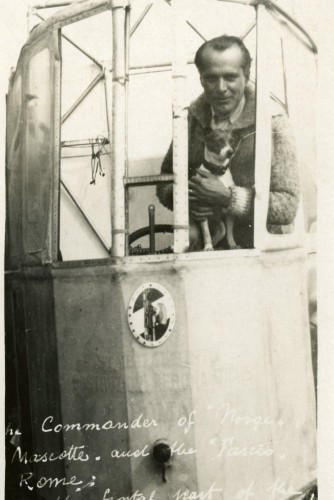 At the age of 54, Amundsen decided to retire having accomplished his dream of landing on the North Pole. Being fluent in English, Amundsen again traveled to the to recount his adventures. One of his stops was Fargo, N.D., where he presented his lecture titled “From Rome to Teller by Air Over North Pole” on Thursday, March 24, 1927, at the Fargo Auditorium. Concordia sponsored this lecture with professors J.A. Holvik, Herman C. Nordlie, and Paul A. Rasmussen in charge of the event. Articles in The Concordian student newspaper provided enthusiastic reviews of the lecture.

Shortly after the evening’s speeches, Amundsen developed a toothache and visited Dr. Albert Hallenberg who extracted the two molars that were plaguing his patient. In 1928, one year later, Amundsen died while on a rescue mission for General Umberto Nobile when his plane crashed into the . A little over a decade later, Hallenberg, who had saved the explorer’s teeth, donated them to the Concordia Museum. These Amundsen relics are now part of the Concordia College Archives collections. Thus, Roald Amundsen not only provided a memorable lecture and a subject for many Cobber papers and presentations, but also his only existing remains which are a common inquiry at the Archives.

– Contributed by the Concordia Archives

Story photo: Roald Amundsen with his dog sitting in the front of the passenger compartment of The Norge.