Following this academic year, Dr. René Clausen will conclude his career conducting The Concordia Choir after 34 years at Concordia College.

During this time, he has impacted the lives of thousands through his compassion, intellect, and gentle humanity, and taught others not only about music but also about life. 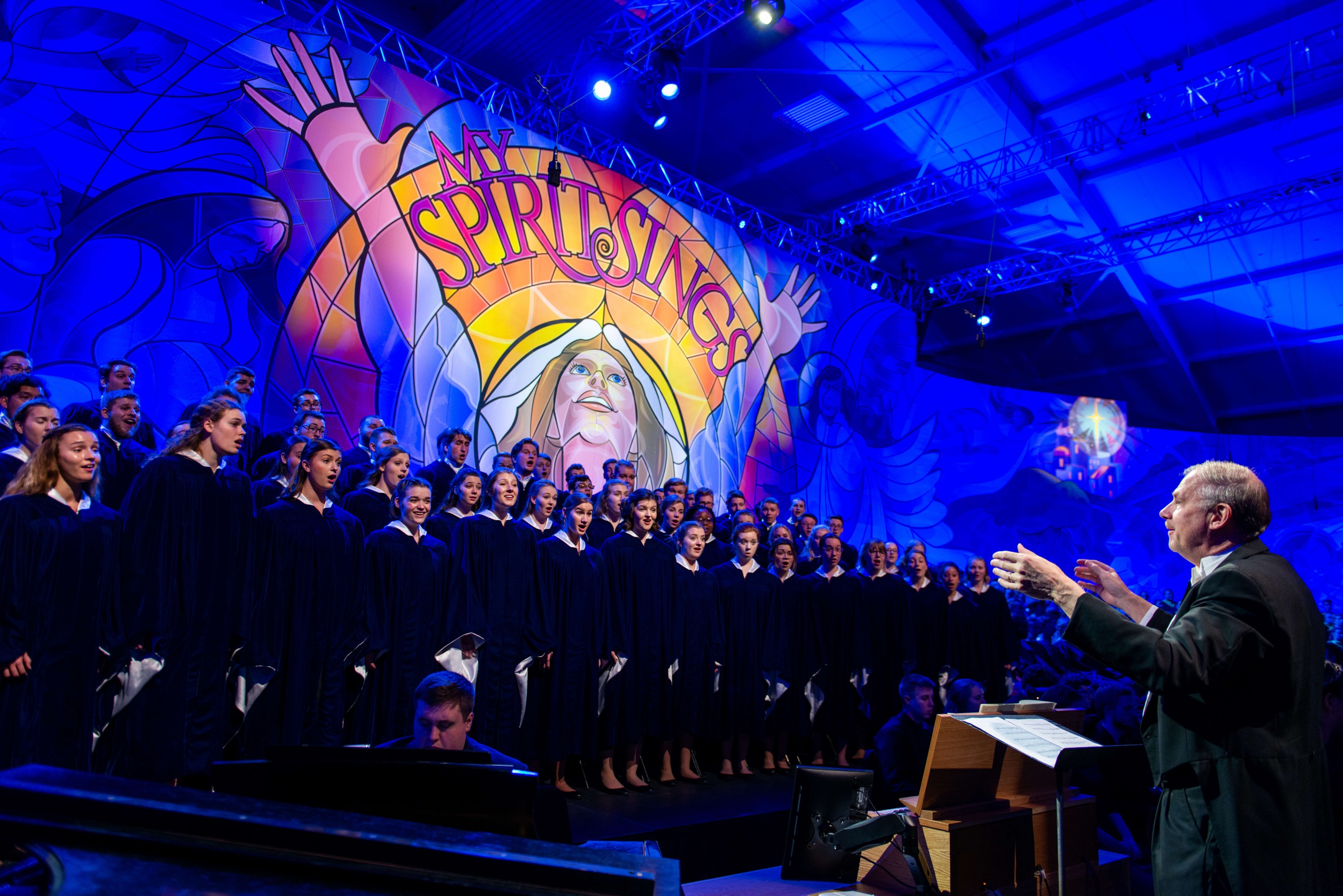 This is how each rehearsal for The Concordia Choir begins.

Since 1986, Clausen has served as conductor of The Concordia Choir. Five days a week in the South Choral Rehearsal Room of Hvidsten Hall of Music, the rich melodies of the 72-voice choir can be heard soaring under the direction of Clausen. Note by note, measure by measure, the pieces are pulled apart into individual notes and phrases, and then stitched back together again into a full work designed to touch the hearts of those listening. Clausen has mastered this process with his unique ability to draw out the absolute best from his students, in regard to both musicality and potential for success in their lives.

“He conducts in such a way that I feel that the sound is almost being pulled out of me, that I can’t help but give him my very best,” shares Laura LeGare ’19, an alumna of the choir. “Whenever I sang for him, I felt as though he was touching my soul and shaping the music in there and that the sound taking shape was the fruit of a continuous partnership between himself, the choir as a whole, and each individual within it. And when that continuous flow of communication is established (as he likes to call it, ‘the circle of communication’), sheer beauty is made – the kind that moves hearts and souls.” 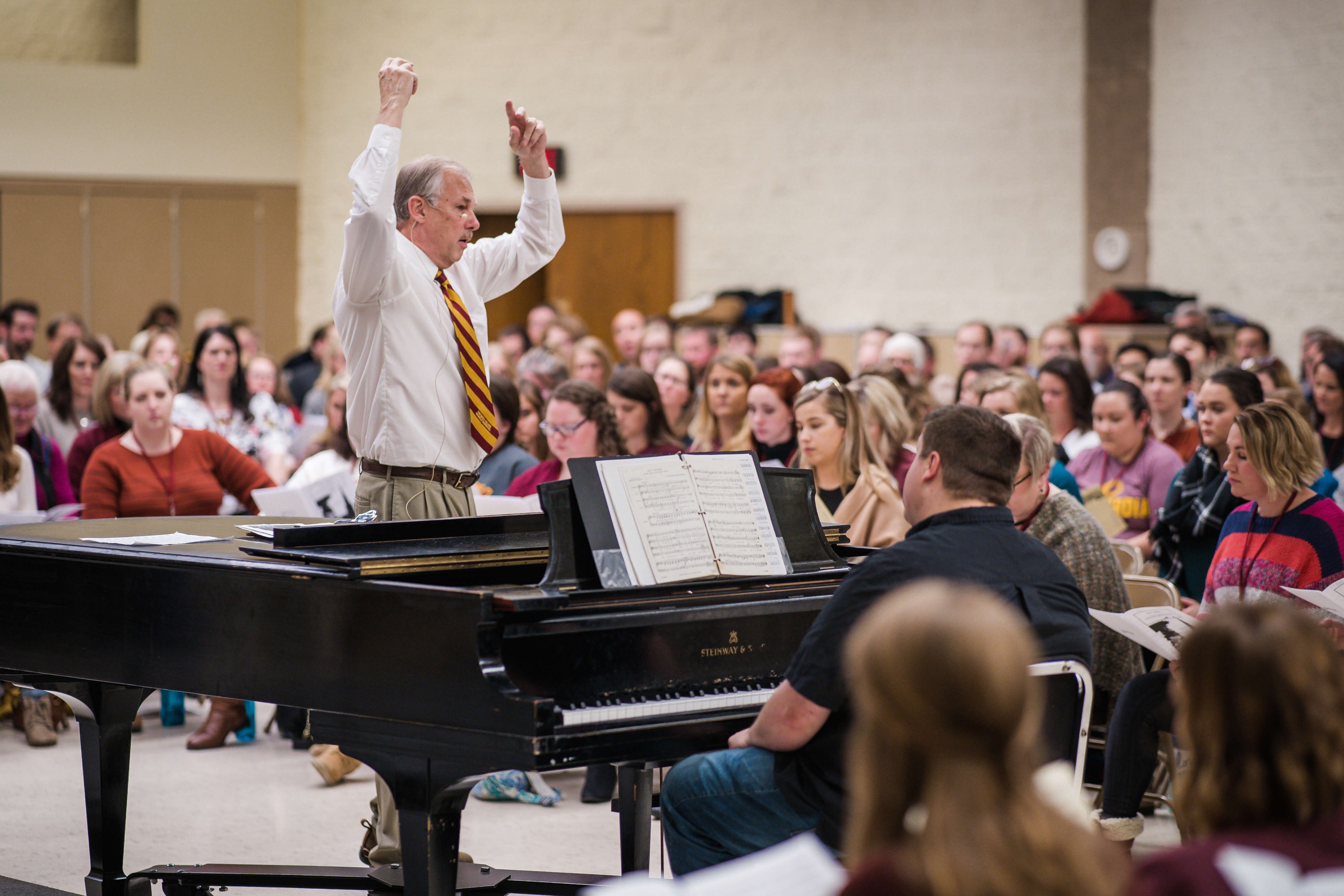 Every person in the choir comes with skill, self-discipline, and the understanding that the rich tradition of The Concordia Choir is something truly special. Clausen expects a correspondingly deep level of commitment from each of his students.

Concordia Choir alumna Grace Murray ’17 realized this but recognized that there was an additional element that made Clausen’s rehearsals especially compelling.

“What made his leadership unique was that every day he would infuse his own humanity into our rehearsals – stories about his mischievous dogs, past Concordia tours, ‘Star Trek’ references, self- deprecating jokes, and his views on the world,” Murray reflects. “By sharing his life with us, Clausen showed us that sharing love, beauty, and fellowship was the true goal. It’s that impact, that legacy, that will be cherished and continue to impact people for generations.”

That impact is why both on and off campus he’s not only respected and admired but revered.

Only the third conductor of The Concordia Choir in the ensemble’s 99-year history, Clausen has served as the artistic director of the Emmy Award-winning Concordia Christmas concerts, which are annually featured on PBS stations throughout the nation. He is an internationally renowned composer and arranger, having written dozens of commissioned compositions for famed performances. One of his most influential compositions is “MEMORIAL,” a work commemorating the tragic events of 9/11. This work has been performed at Lincoln Center in New York City on multiple occasions since its premiere in 2003. He has received dozens of awards for his compositions and conducting – including three Grammy Awards – and continues to travel extensively as a guest conductor and speaker.

Along with his many accolades, Clausen has been married to his college sweetheart and fellow musician, Frankie, for nearly 46 years. Together, they have raised three grown children and enjoyed living in Moorhead and being a part of the Concordia community. 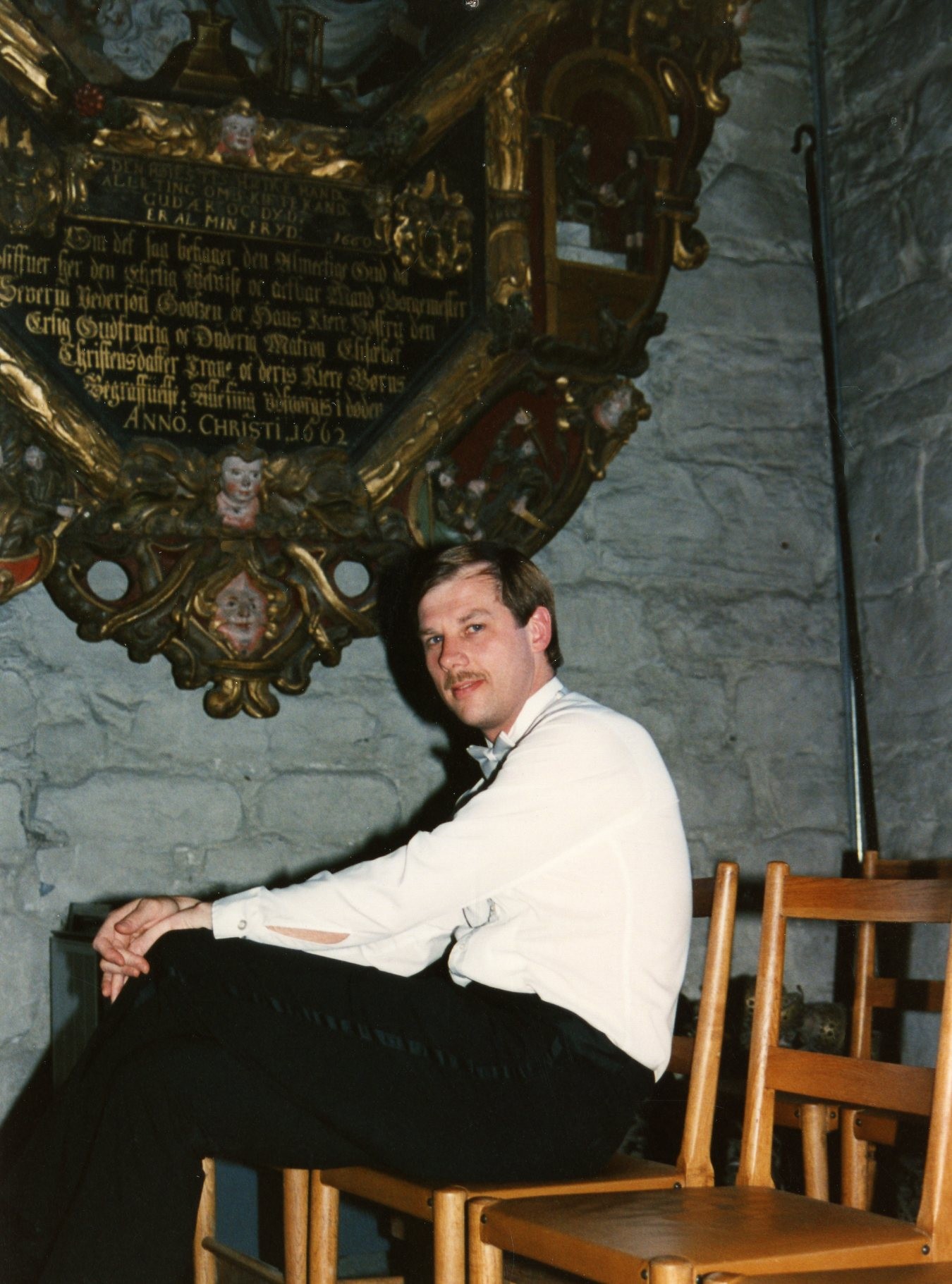 His accomplishment notwithstanding, he is certainly beloved by those who know him.

Kathy Benson ’64, who recently retired as Health Center administrator after 50 years with Concordia, has been accompanying The Concordia Choir’s annual tour since 2002. During this time, she has not only become Clausen’s friend but has witnessed his unfailing character.

“What has never changed is his investment in students as human beings. He takes chances on students,” she shares. “The two weeks of tour have been my spiritual vacation because it has given me a chance to spend a different kind of time with young people and be blessed by their presence in my life, but this has also included Dr. Clausen. He has always been so inclusive to me, the non-musician. He respects my feedback and has always valued me being the other half of the circle.”

Dr. Roy Hammerling, a professor of religion, feels fortunate to have had the opportunity to not only collaborate with Clausen but to be his friend. Hammerling came to teach in the religion department at Concordia in 1992, shortly after Clausen arrived.

“I remember when I first came to Concordia and heard The Concordia Choir perform,” Hammerling reflects. “They were singing ‘Totus Tuus’ in chapel and I remember thinking, ‘I hope I get to teach here a long time just so I can hear these choirs, this conductor, this composer, do what he does.’” 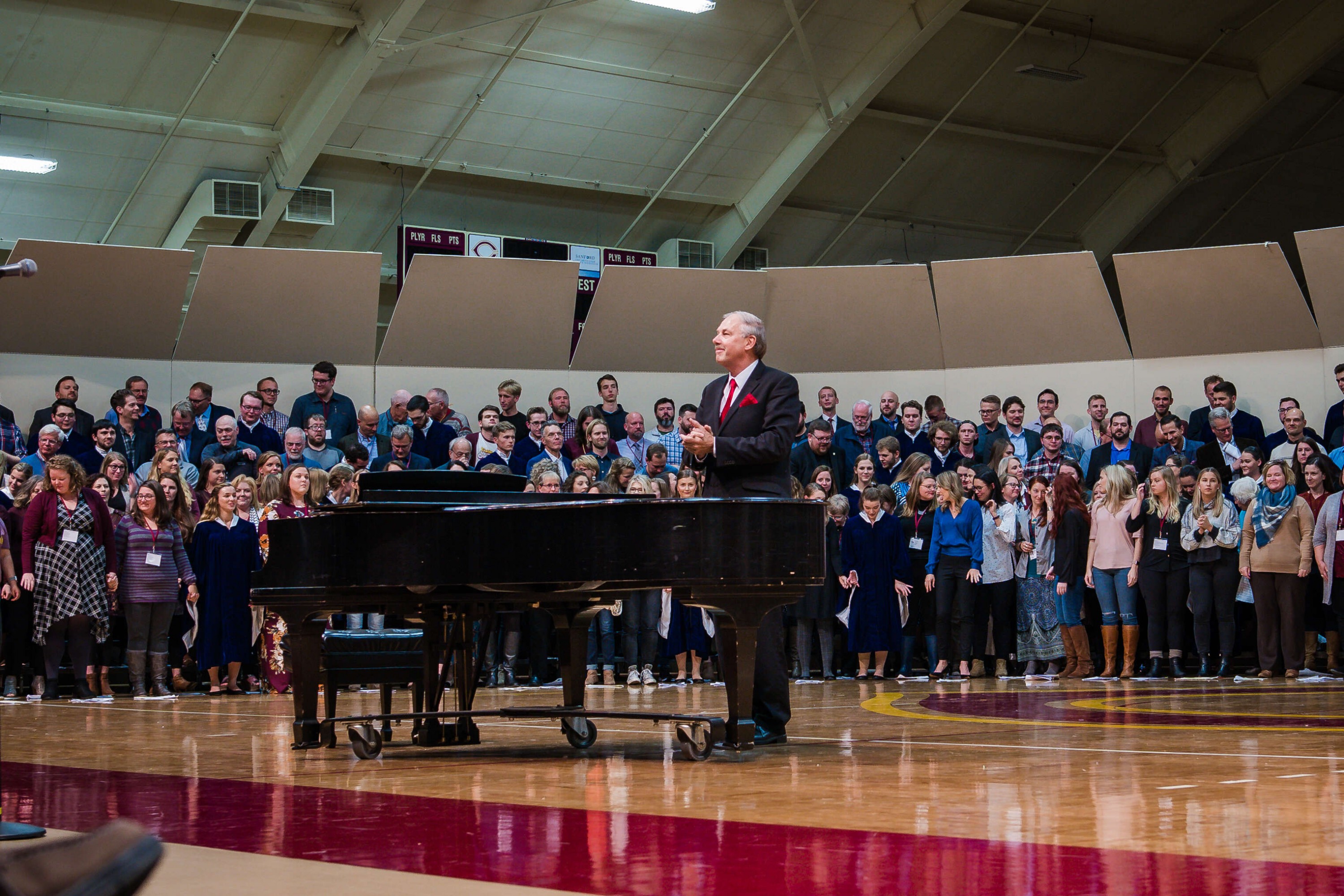 Throughout the years, they have collaborated on some of Clausen’s largest works, including “MEMORIAL” and “The Passion of Jesus Christ” and have both challenged and supported one another throughout the process.

“As a human being, René is great to be around. He is a very deep soul. He feels, thinks, and loves very deeply,” Hammerling says. “Those sorts of things come through in his music. I think that deep sensitivity that certain artists have allows them to go to a place that many people don’t even know exists. When I hear him conducting one of his own pieces or someone else’s, I feel as if I’m standing before someone who understands the great mystery of God. And somebody who stands in awe of that.”

Another close friend of Clausen’s is Peter Halverson, who is a member of the voice faculty at Concordia. Halverson has enjoyed being a soloist in many of Clausen’s compositions and has narrated the Concordia Christmas concerts as the Voice of God throughout Clausen’s tenure.

“Ever since Dr. Clausen first came to Concordia, we forged a close relationship as music colleagues and friends. We have golfed and played billiards together and shared our thoughts on music and life,” Halverson shares. “In all these years, I have witnessed with amazement how he has year in and year out molded The Concordia Choir into one of the finest collegiate choirs anywhere. That he was able to take an already established and nationally recognized choral program and not only sustain it, but enhance it and grow it to become in the mind and ears of many the premier choir and choral program in the country, speaks volumes to his unique talent and dedication that has maintained this incredible choral tradition at Concordia College.” 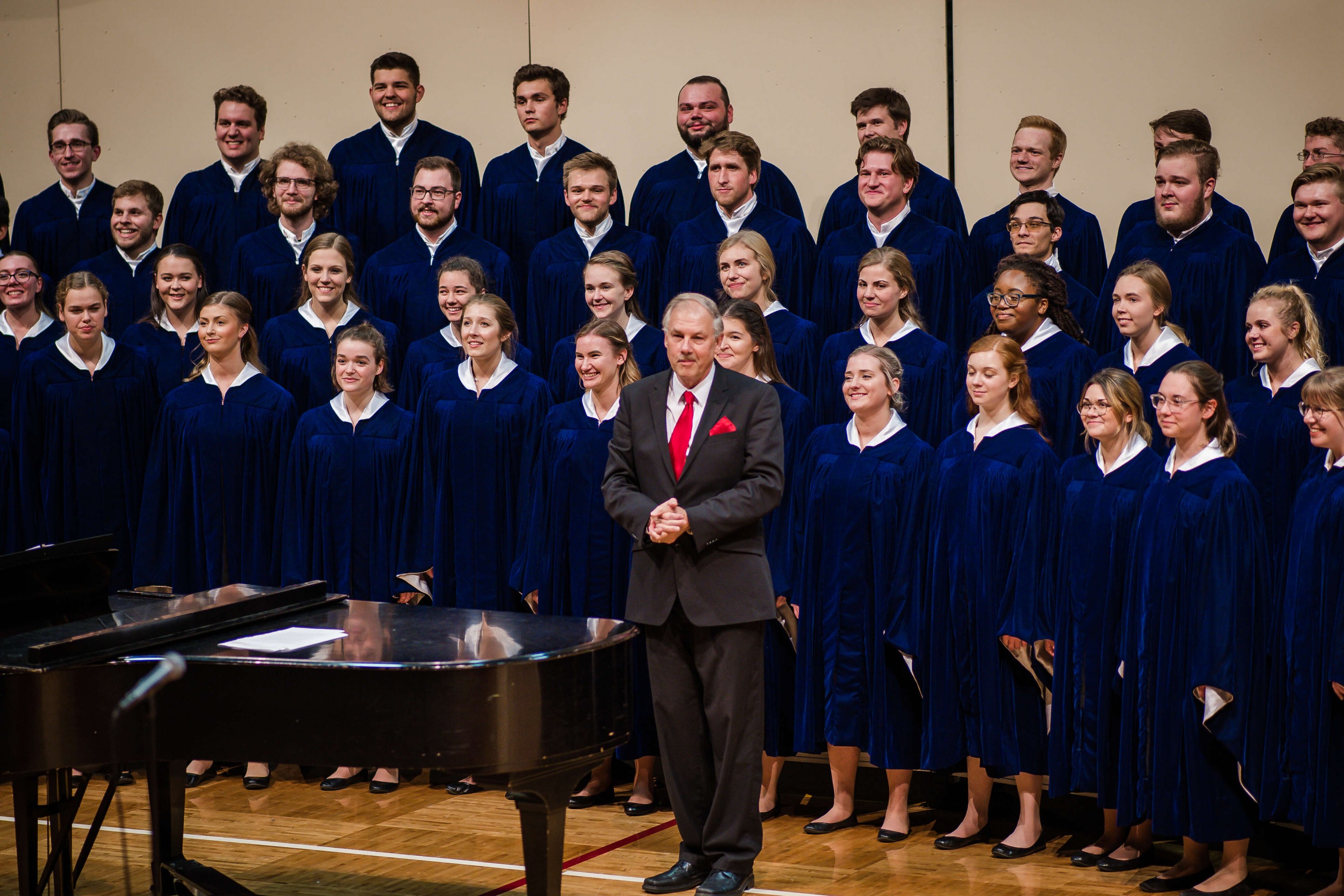 “The appointment of Dr. Clausen was among the most important in my years as president. We wanted to sustain and build on a distinguished tradition,” Dovre recalls. “The F. Melius Christiansen choral tradition was distinguished by its attention to color, passion, and technical excellence. René was a perfect fit both as a conductor and composer. And while he mastered the essential elements of the tradition, he was not bound by them. He explored new subject matter and new modes of expression and soon the ‘voice’ and program of The Concordia Choir was his own. I particularly appreciated his attention to the changing social and cultural environment and the creative way in which he both reflected it and spoke to it – particularly in his work as a composer.”

In regard to Clausen’s character, Dovre says, “René’s passion for music is matched by his empathy for people – especially his students to whom he was much more than a conductor. René’s constructive influence on choral music in general and Concordia in particular is impossible to overstate.”

One of those students is Lee Nelson ’96, the director of choral activities at Wartburg College in Waverly, Iowa.

“Dr. Clausen is a mentor that helped shape my career, my character, and my faith,” Nelson says. “When I became a student at Concordia, I entered as an accounting major with a love of music. After experiencing choral music under the direction of Dr. Clausen, I quickly realized that my love of music was far more than just a passion; it was a vocation. He embodies what it means to teach life and spirituality through the lens of music. Dr. Clausen’s intensely creative mind consistently brings out the best possible singer in each person. He has a quiet way of instilling an unwavering work ethic and a passion for musical excellence in every singer. It is something I strive to model in every rehearsal I conduct.”

Upon his arrival at Concordia, one of the tasks set before Clausen was conducting the Concordia Christmas concerts. Following Christiansen, he set forth to carry on elements of tradition while making the Christmas concerts his own. One way Clausen accomplished this was by replacing the brass choir with a full symphony orchestra to complement the choral performers. He also scaled back the narration in favor of more music and he started the tradition of closing the concert with “Compline.” 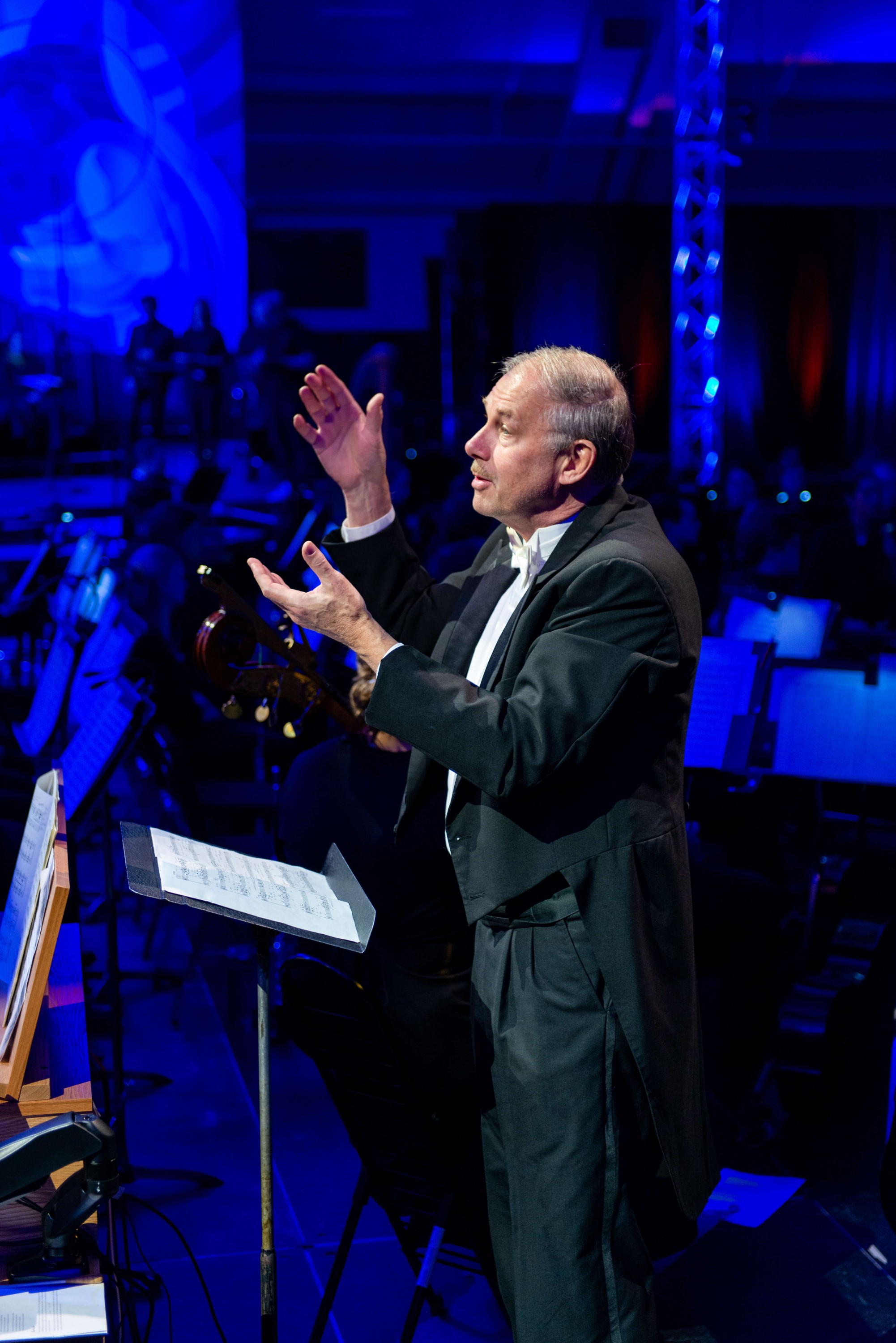 Of Clausen’s first Christmas concert, Benson recalls sitting in the audience and thinking, “‘It’s going to be even better.’ Deciding to include strings added so much depth and warmth. And with the addition of ‘Compline,’ for those few precious moments it’s as if all is right in the world.”

Clausen’s creative brilliance in making the Christmas story come alive inspires nearly 16,000 attendees each year, as well as thousands more who experience the concerts on radio and television broadcasts throughout the country.

Following the academic year, the Clausens plan to move to Burnsville, Minn., where Clausen says he’s looking forward to the opportunity to “reinvent” himself. Although he foresees challenges that might accompany this new season, he’s ready for a fresh rhythm of life.

He’ll finally have time to settle into musical projects that have taken to the backburner over the years due to professional responsibilities in addition to raising a family. He plans to continue to compose, potentially for the stage and film, both of which have been longtime dreams of his. He is also looking forward to having more time to spend with family as well as traveling with Frankie.

“I hope for the continuity of quality; this program deserves that. Paul J. Christiansen was here for 49 years and this program grew up during his tutelage,” Clausen says. “It was how he built the touring tradition of the choir and was sustainable throughout five decades of his life. As I came on and have now been here 34 years, I have felt OK with it being on my watch. I felt the responsibility of its artistic achievement, enhancement, its continuity. I hope that will continue – that all the pieces will be in place for the next person for their watch.” 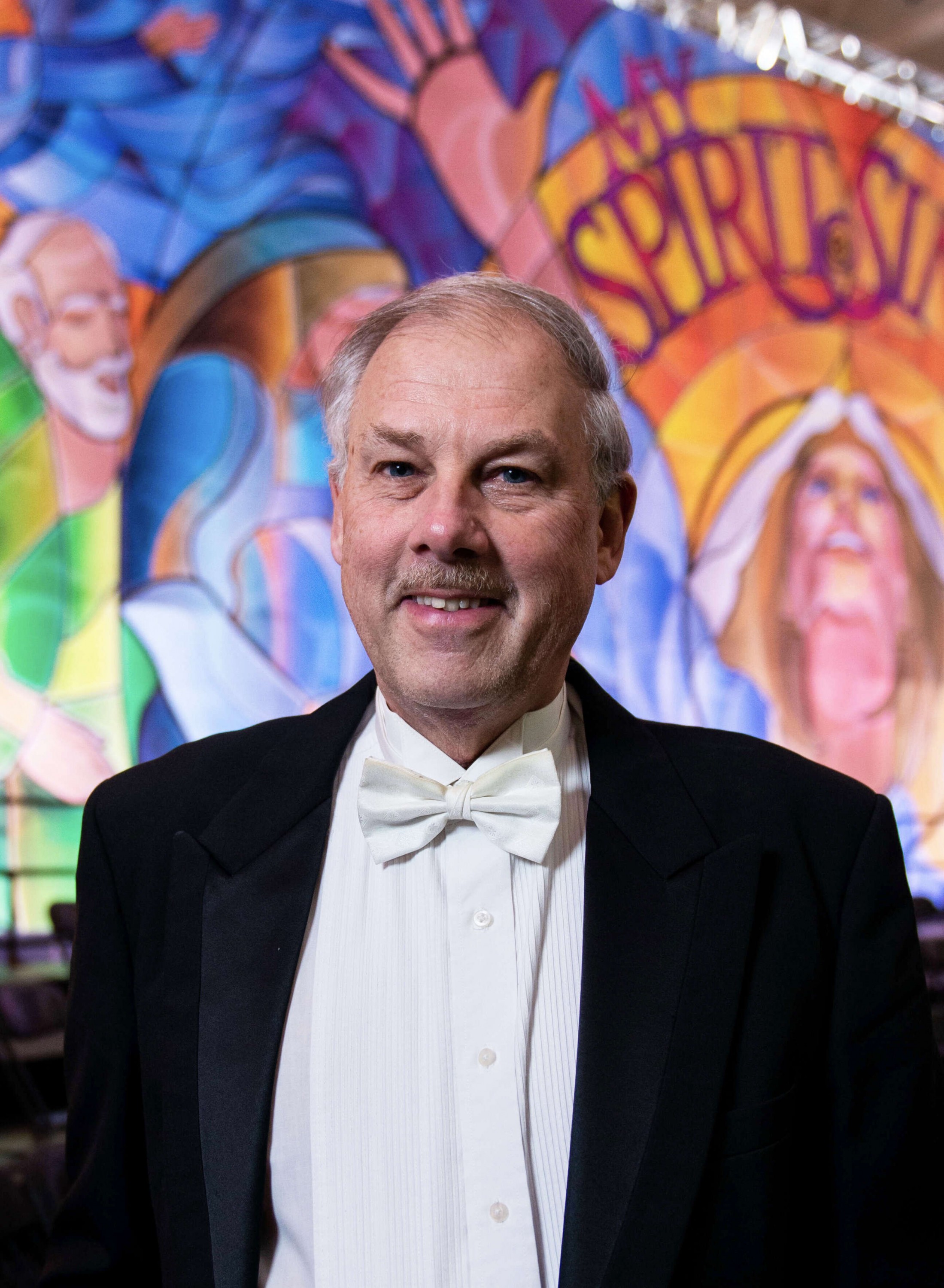 Clausen remains humble when asked what he hopes his legacy to be.

His legacy will certainly continue to influence individuals for generations to come as his students carry on his teachings and life influences, with scores of his students leading high school choral programs across the country and 18 of his former students conducting and leading collegiate choral programs throughout the nation.

“I don’t think he can comprehend the amount of lives he has impacted, both singers and non- musicians,” Benson says. “He has cast his bread on the waters and given us a non-conditional gift. He has given us a ‘song in the night’ whether we realize we need it or not.”

Clausen concludes, “Over half of my life has been spent here at Concordia. If I had to do it all over again, I would do it all the same way.”

In the words of Dr. Clausen as he closes each of his rehearsals: "Live long and prosper."