As the student manager of The Concordia Choir, Emily Oliversen ’22 shares her experience preparing for the annual Christmas concert. 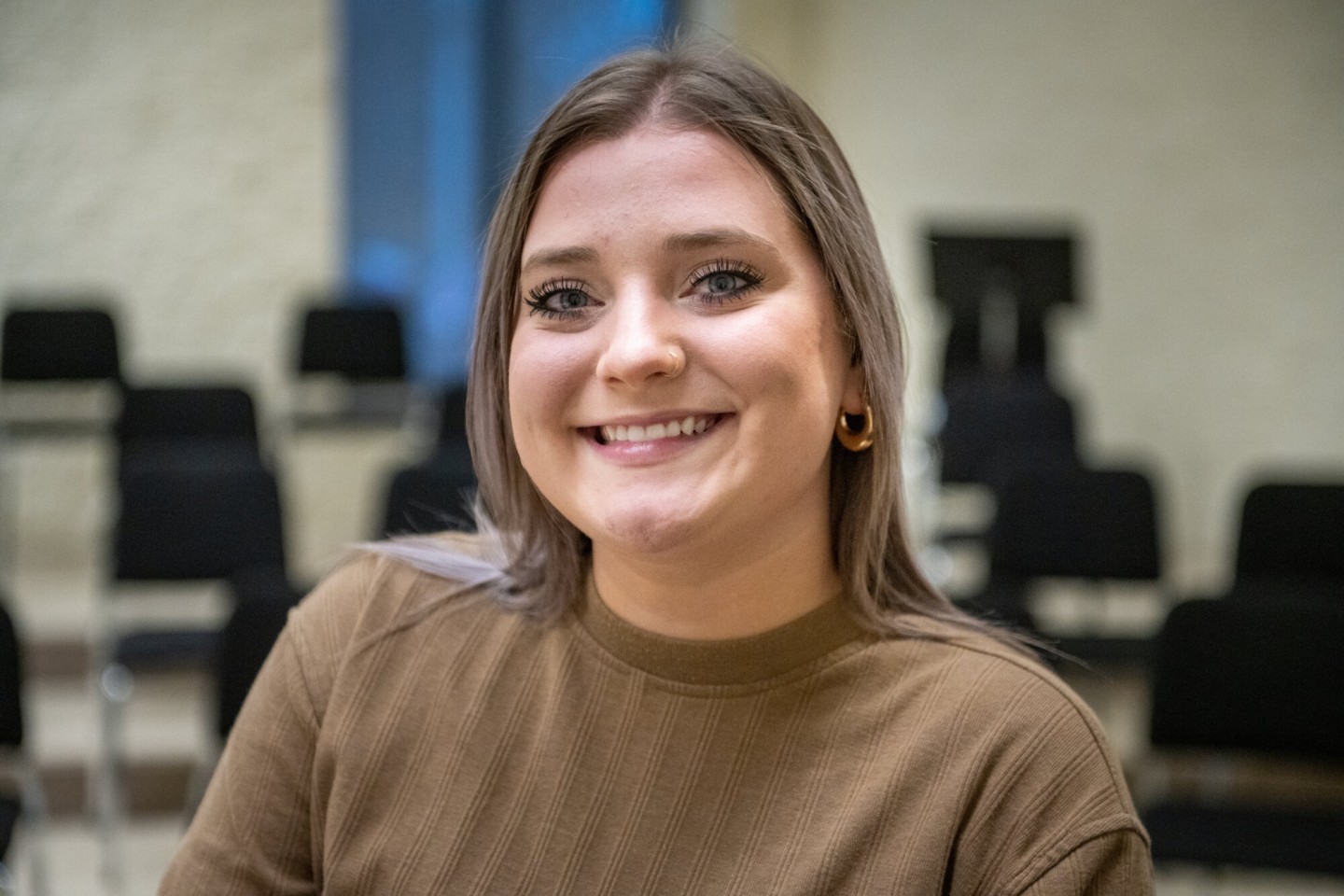 I’m a flex-year senior and the manager of The Concordia Choir. I’m very involved with the music department and all things choir.

Tell us about your involvement with Concordia’s choral program.

What’s the difference between being the choir manager and president?

The choir manager position is a hired position through the college, so it is paid. The choir president is elected by the members of the course. Within the choir, the manager is viewed as the “brain” of the choir and the president as the “heart” of the choir.

What does being the choir manager entail?

It’s basically being a voice among my peers. I’m speaking for Dr. Culloton and our manager for choral activities, Wyatt Steinke, and am a representation of them for my peers and vice versa. I’m essentially a bridge between the chorus and the people in charge. 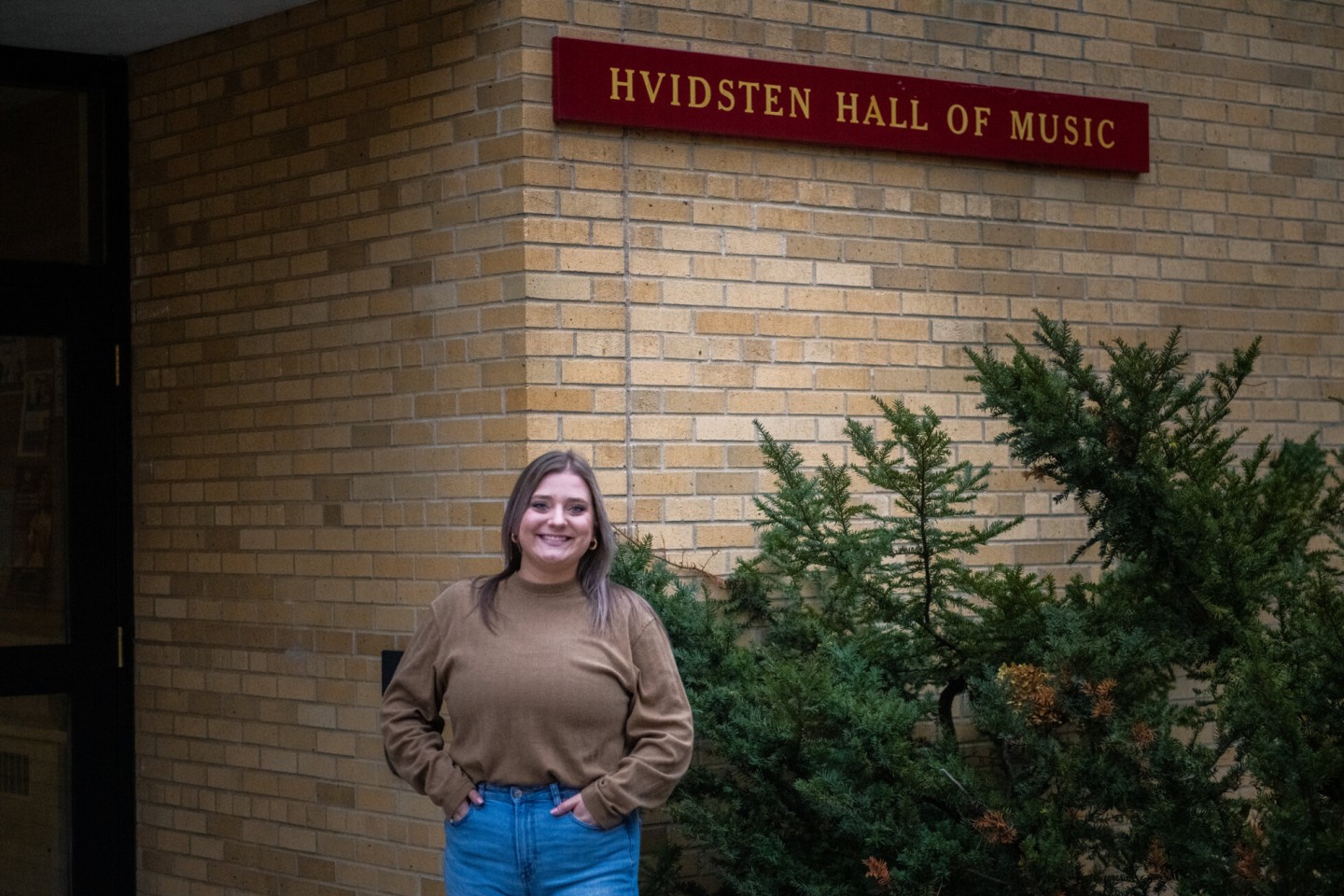 What does a day in the life of the Christmas concert season look like for you?

During Christmas concerts, the manager’s job is to be behind all the movement that needs to happen. As the manager, I am in charge of getting volunteers for various setups. If we have a mass choir rehearsal with the orchestra or even just a mass choir rehearsal in general, I handle the preparation, including getting the volunteers and figuring out how many chairs need to go where. Especially during the Christmas concert season, it’s important to have your crew with you at all times and know things like “OK, where are we going to go next?” and especially leading by example and saying what the expectations are because we missed a year of in-person Christmas concerts. Something that was kind of second nature after our first year of performing the concerts together has kind of gotten lost. Essentially, half the choral program is going to be learning what the tradition looks like by participating in the Christmas concerts for the first time. It’s also making new traditions with Dr. Culloton and not Dr. Clausen anymore, although we still have “Silent Night” and “Compline” and everything is structured the same.

How are you taking extra steps to be COVID safe for the Christmas concerts?

The number one change is that The Concordia Choir is all vaccinated because we are a touring group. The Concordia Chapel Choir members are as well and I’m not entirely sure of the vaccination status of Kantorei members but, from my understanding, most of us in the choral community are vaccinated. That being said, we are still masked during rehearsals and whenever we are indoors. We understand the risk that comes from performing these concerts because COVID cases are spiking once again in the state of Minnesota. We’re taking precautionary measures in terms of getting tested even now in the stage of us getting our booster shots. During the concert, we will all be masked the entire time. We also ask that our audience members be masked as well. In fact, at our Orchestra Hall concerts, audience members have to submit proof of vaccination or submit a negative COVID test before coming. We’re ensuring that our guests coming onto campus are safe and we’re making sure that we’re also keeping our singers safe. The Christmas concerts will be in person again, which is so incredible that we get to do that. Compared to last year’s concert, where we were all socially distanced in the bleachers, 6 feet apart and masked, now we get to stand shoulder to shoulder.

What does the structure of the Christmas concert look like?

The structure of the Christmas concert usually starts off with an orchestra piece that is played before the choirs begin but, typically, there’s a choir on stage already — usually The Concordia Choir. Then there is some advent dialogue followed by a processional where everyone walks onto the stage from the aisles of Memorial Auditorium and we get together and sing a mass choir piece then the solo choir pieces begin. There’s still narration being done by Peter Halverson and Rachel Horan throughout and it tells the Advent story, not just the Christmas story. Then singers walk back into the audience. We all have an intimate moment where we sing our carols from the aisles and those are done a cappella. Once we’re done with carols, we sing Dr. René Clausen’s arrangement of “Silent Night” together and we see a huge sea of audience members stand up for the third verse and all join in to sing for a very powerful moment. We wipe the tears from our faces and have one last hurrah of a mass choir and orchestra piece. Then the choirs process back in the audience and we close the concert with “Compline.” There’s always the Star of David on the mural and the final thing we see is the star before all the lights go out and the auditorium goes black. It’s special and magical and I’ll never forget the first time I got to perform it. 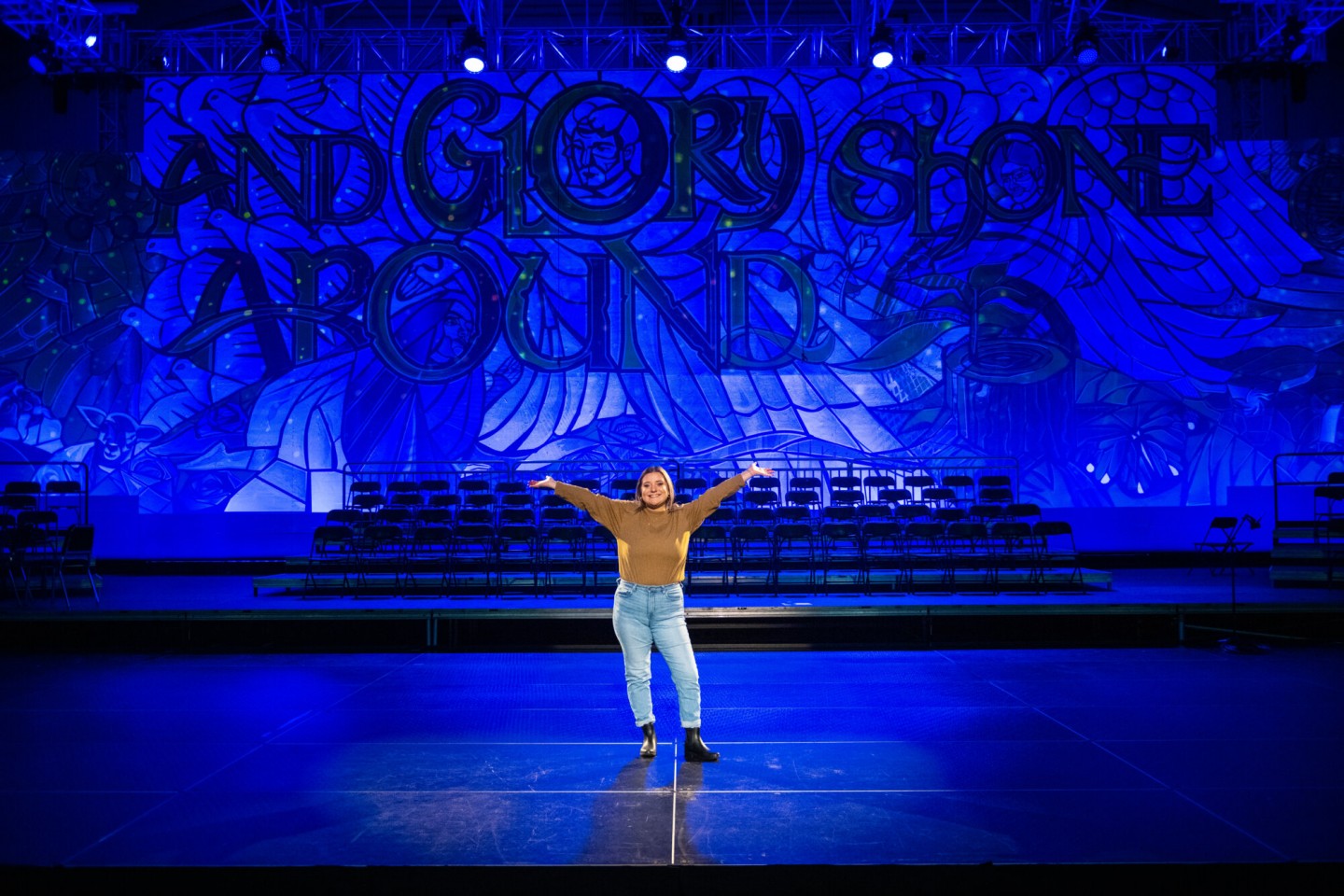 What is a behind-the-scenes fact that concertgoers may not know about?

Before each concert, each choir gets a chance to give a devotional. It’s really cool to hear the first-year choirs talking about going into their first Christmas concerts. Then you hear seniors in Chapel Choir or The Concordia Choir talking about what the Christmas concerts mean to them as veterans. Hearing that progression throughout your time as a singer at Concordia is very special. It’s fun to listen to the different devotions and really nice to practice mindfulness before we begin a performance. I also really enjoy that we sing the doxology together before the concerts because before we give art and music to other people, we give art and music to ourselves.

What has it been like transitioning from singing with Dr. René Clausen to Dr. Michael Culloton?

I believe it has changed in good ways. We’re still in the peak of the transitional period, especially this being the first “normal year” since coming back from COVID, but I think it will continue to ensure the ideology from The Concordia Choir mission statement, which states: “The mission of The Concordia Choir is to uphold a sacred choral tradition through the uncompromising and unrelenting collaborative pursuit of musical integrity and spiritual expression.” We’re keeping up with the idea of integrity and that’s my number one thing, especially being a chorister and maintaining the tradition that comes along with it. Dr. Culloton took over Dr. Clausen’s position as The Concordia Choir conductor, but we also have Dr. Knutson taking over as the director of Kantorei and Chapel Choir and she has brought such good change that needed to happen. I think, especially as a woman in college, getting to see that representation is really important. She’s so inspiring. Each time I hear her talk, I get emotional. I’m glad to have her here.

The choral program in general has suffered in numbers, which is sad, but I think what people are going to find over the course of this year, and especially during the Christmas concerts, is that the legacy of The Concordia Choir and the choral program at Concordia will continue. Just because Dr. Clausen retired doesn’t mean the legacy is gone. The talent and the musicianship and the magic behind it all continues.

What is the most challenging aspect of the Christmas concert season?

In the context of everything, the Christmas concerts happen right before finals week. You basically give up all your evenings to be involved in the Christmas concerts, but it’s worth it. I’d say the most challenging part about performing the concert itself is maintaining focus. As a first-year, I was not used to staying still for that amount of time. You have to practice being OK with being still when you’re up on stage but not performing, so I like to pick a spot to stare at and listen to the music that’s happening around me and be in the moment. I think the most challenging aspects are staying rested and focused when you’re so tired and busy.

What is the most rewarding part of the Christmas concert season?

The most rewarding thing is definitely hearing those three chimes at the end and those moments of silence that we have together as performers and the audience. We start collecting the moments and reflecting on what we have just experienced together, and then all of a sudden the lights come up and there’s applause. This is the first we hear from the audience other than when they sing along with us during the concert and it’s just really cool what you get to see once those lights come up. Then you walk out to the people in the audience you know, and give hugs and talk about the concert and special moments that have happened. The most rewarding thing is the connections that are made with not only us as musicians but our audience members. 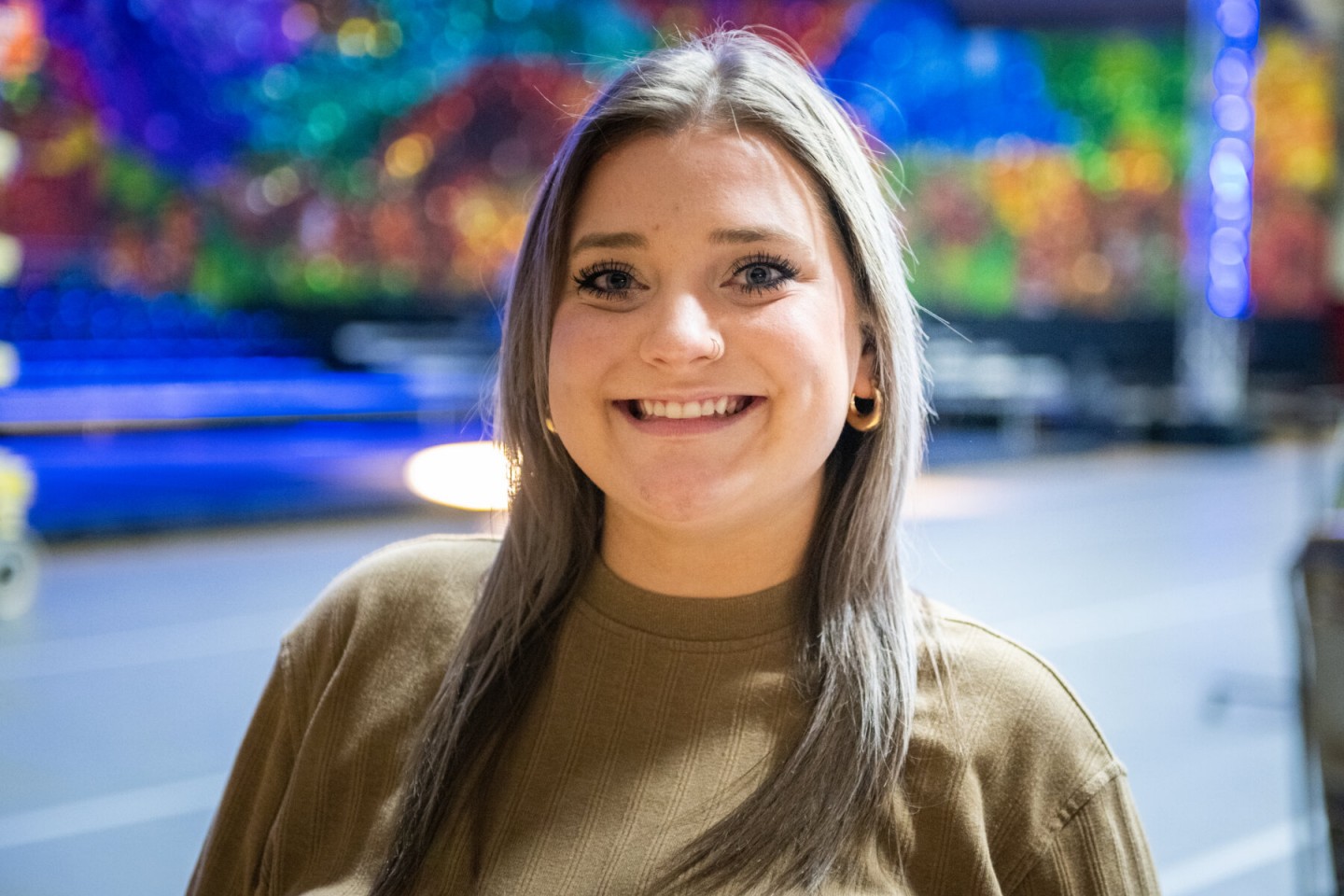 Is there anything else you would like to add?

I’m excited. I think when I was going into this position I was nervous about a lot of things, especially since I’ve always been in positions that are more social. Coming into this position, I was worried about choristers being receptive to what I’d say. In general, the thing I was wondering about was “how do we get this many students to do the thing?” I’m a part of making that happen now. Before, it was just knowing where to be when but now I have to provide that information. This Christmas concert is lovely. It’s so positive and optimistic and I really like the music we’re creating.

Editor’s note: In addition to the Moorhead performances, the Concordia Christmas concert will be at 6 p.m. and 8:30 p.m. Thursday, Dec. 9, at Orchestra Hall in Minneapolis. “… And Glory Shone Around” will be video recorded at Orchestra Hall and available for online viewing Dec. 22-29, 2021. Visit ConcordiaChristmas.com for more information.