Whether you are standing in front of the statue of David in Florence, Italy, dropping off your kids at daycare, or watching TikTok, Cobbers are everywhere – you just have to keep your eyes open.

We asked our Facebook followers where some of the craziest places they have run into another Cobber wearing “the ring.”

Here are the top 75 responses:

Jim R.
“Sitting in my golf course office in the Phoenix area. I had a golfer wearing a Cobber ring come in to discuss a group outing at our course. Needless to say, I made it happen!”

FlavioJaci P.
“On a small Air Force Base in Florida. Not many of us Cobbers are in the military, so it was a nice surprise!”

Miranda L.
“At the gas station I worked at. I must have met at least 5 Cobber alumni as they were passing through the small town of Blue Earth, MN.” 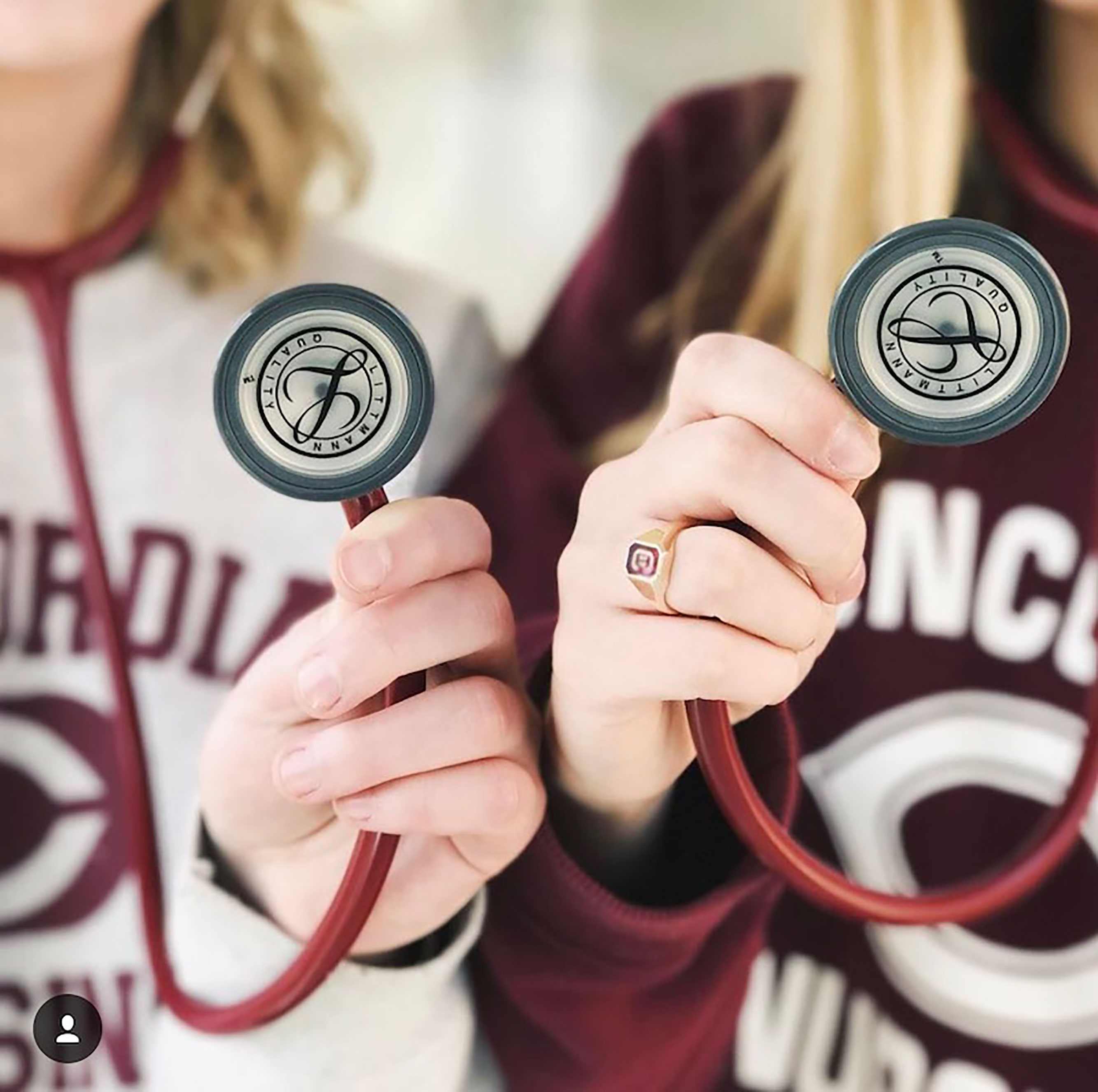 Marilyn L.
“While traveling in Norway. We were told if we wanted coffee after dinner we were to go upstairs! As I stood in line, another lady put her hand out to get her cup and there was her Concordia ring! We shared our rings and we actually had both graduated in 1961!”

Kara D. J.
“On a sailboat on the Great Barrier Reef in Australia! A man came up to me and said, ‘You must be a good Scandinavian Lutheran,’ then proceeded to show me his ring! Crazy. Such a small and amazing world.”

Beth K.-J.
“When I was on tour with The Concordia Choir in 1983 and 1984. We saw so many rings along the trail. It really is a small, interconnected world! It was interesting learning about all the different stories.”

Laura C.
“At the Anne Frank Museum in Amsterdam. But also one day when I was in college visiting my mom at her work in the Twin Cities, a guy came in for a meeting, saw my ring and insisted on a Cobber fist bump.”

Tina S.
“One of my patients. He dated my grandmother in college and I wear her ring now. Crazy to think those rings had been in the same room before almost 70 years ago.”

Lynn L. G.
“We moved to the Chicago area and on our first visit to a new church, the pastor, Gary O., and his wife, Shay O., were both wearing them! Needless to say, we JOINED this church.” 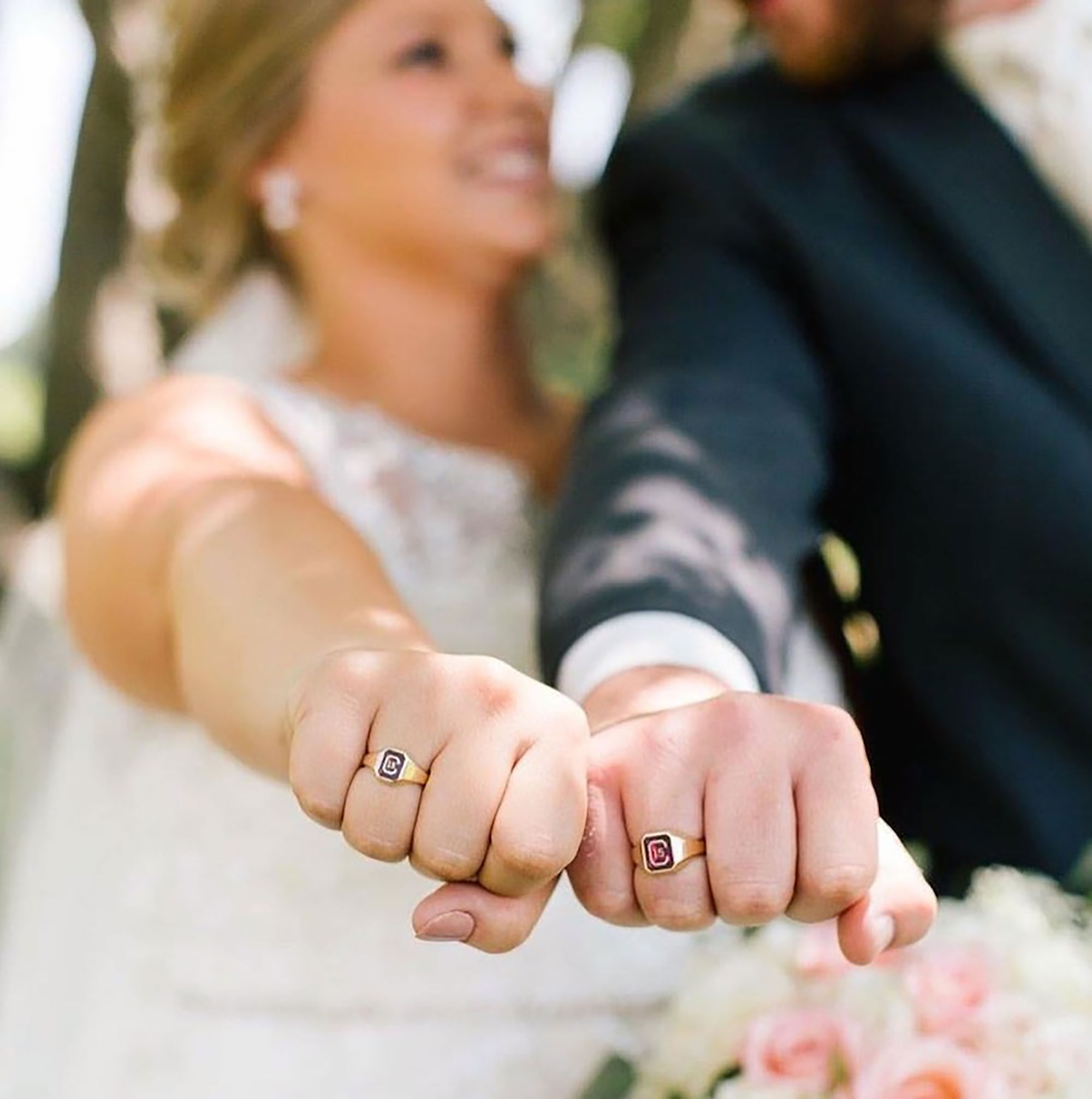 Diana O. A.
“Interviewing for a job at Reader's Digest in Pleasantville, NY. I got the job!”

Stefne L. B.
“On a canal tour boat in Amsterdam. We graduated 29 years apart.”

Lori T.
“When I was going into surgery. He was the nurse anesthetist.”

Terence J.
“In a dental chair. My dentist! He’s awesome!”

Sandy K. L.
“On the Tube in London when I was living there.”

Eleanor B. H.
“On a bus in Switzerland! Fun times when you wear a Concordia ring!”

Anna H.
“On a random hike in Rainier National Park.”

Elizabeth N. P.
“Target in Seattle (I live in ND and was on vacation).”

David N.
“At a church conference in San Diego. We have now been married 51 years, right Claudia Richman Nelson '64?”

Catherine J. O.
“Last week in Venice, Italy! My husband was wearing his Concordia football jacket and a man stopped us and showed us his Cobber ring!”

Heather-Ryan A.
“At the iHop near the MOA at the walk to end hunger.”

Annette G. S.
“This past summer in London. What a fun connection.”

Anjuli A.
“At a Cracker Barrel in Little Rock, Arkansas.”

Kay Y.
“On an airplane on the way home to Minnesota from New Jersey.”

Monica S.
“The hiking trails on Madeline Island in WI.” 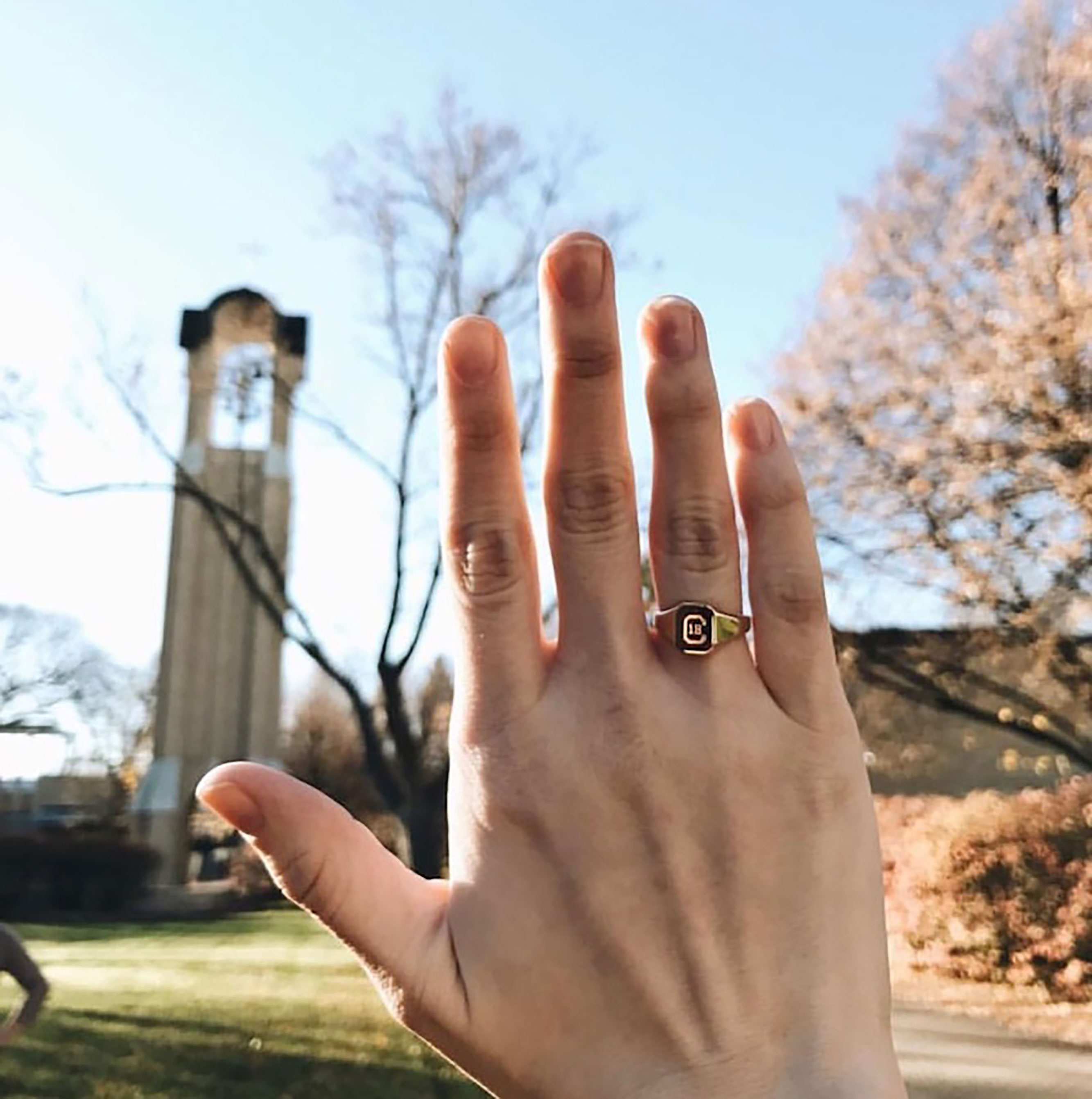 Linda S. F.
“Most memorable encounters were at Akershus Castle in Oslo, Norway, back in 1971 and at the Albuquerque International Balloon Fiesta last October when our group of 6 Concordia alumni wanted a photo taken. We asked a young lady and she turned out to also be a Concordia alum!”

Emily S-D.
“Most recently at a Halloween party! Fully costumed and was asked, ‘Are you a Cobber?’ We immediately hugged!”

Brittni A.
“ICU at Abbott Northwestern Hospital. I was charting away on the computer and a lady saw my ring from afar and ran up beside me and said, ‘You’re a Cobber too! Me too!’ and then she hugged me. Also in England and Norway on the train and in a shop in the city centre.”

Erin H.
“While living in Jacksonville, Florida, I attended a training for Junior Achievement and the program manger had attended Concordia. #gocobbers”

Kris H.
“At a spring training game for the Minnesota Twins in Fort Meyers, Florida. I put my hand up on the back of the seat next to me and the guy in the row behind me was also wearing his Cobber ring.”

Wyatt S.
“Standing in front of the Statue of David in Florence! I also just heard a story of one of my fellow teachers running into other Cobbers in the Uffizi gallery, also in Florence.”

Shaine R. R.
“I attended a small Lutheran Church in Murphys, California. Two of the members were fellow classmates of ’86.”

Elizabeth S. O.
“At the GABF in Denver. He was an alumni from 2006. Best part, I was with my Concordia roommate!”

Suzanne H.
“Ambato, Ecuador! Kris and Shed Waskosky were living there and I was on a medical mission trip.”

Emily T.
“At a shop in the Agora in Athens, Greece.”

Brenna K.
“In the Iceland airport! He graduated in ’78 coming home from Norway, wearing all Cobber gear!”

Kimberly A.
“At an International Lutheran Church in Seoul, South Korea.”

Randy S.
“Holding on to a subway train pole in Tokyo.” 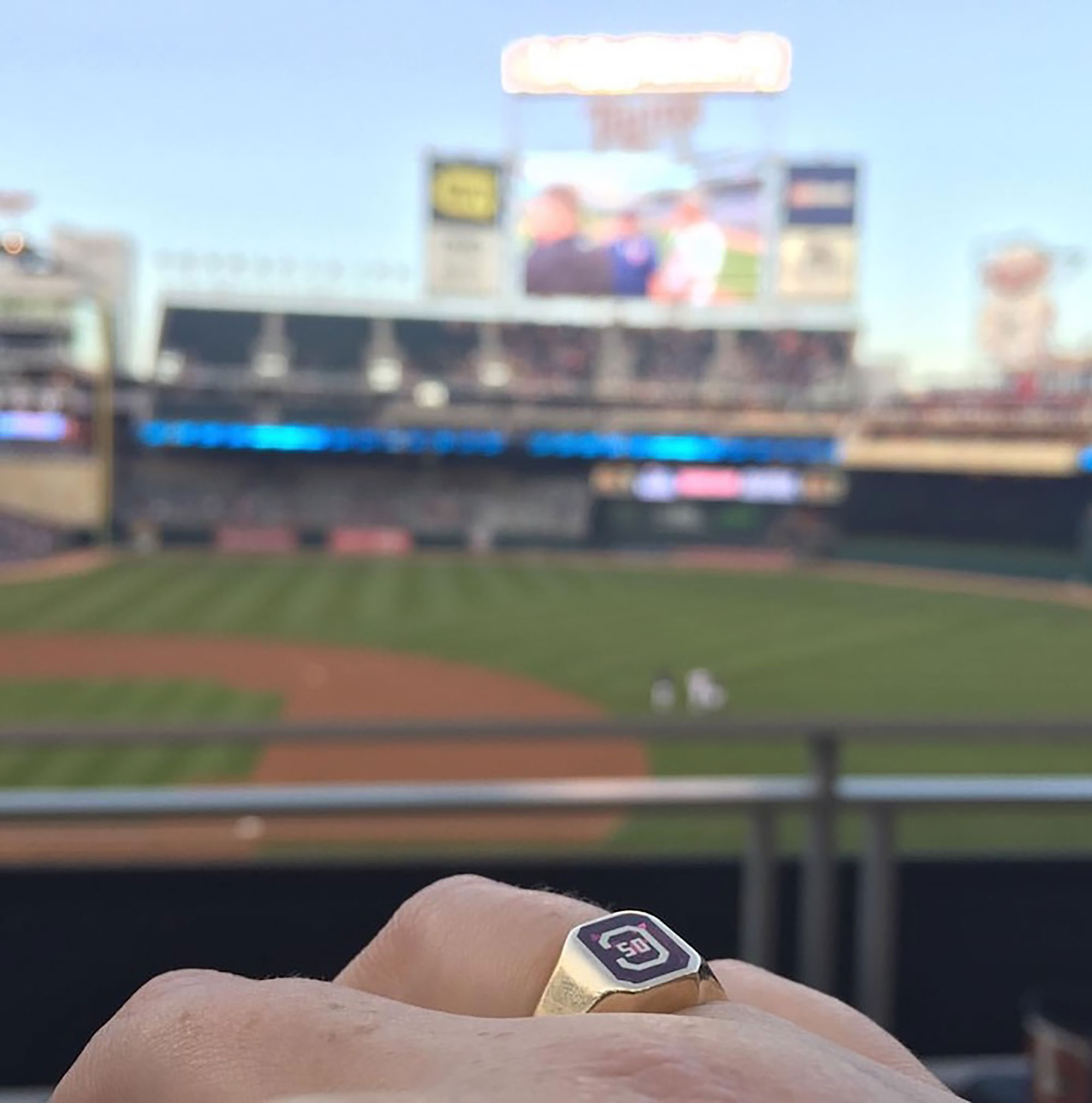 Joe F.
“Train ride from Copenhagen to Hamburg; three of us in one train car!”

Mikayla C.
“In a Boston Panera!”

Dannica O.
“At a Buddhist temple in India!”

Lankin T.
“At the Denver zoo!”