Every Cobber football player receives a Joshua 1:9 pendant: "Be strong and courageous. Do not be terrified; do not be discouraged, for the LORD your God will be with you wherever you go." (NIV)

Brent Rysdahl '13 quietly sits by his locker gearing up for gridiron battle. His armored suit of helmet and pads protect him as he takes the field for 60 minutes of hard-hitting action. But his most valued piece of equipment is a shield that will protect him for life.

Rysdahl's shield is actually a Joshua shield pendant presented to every Cobber football player during his first year in the program. The shield is named for the biblical hero who took the reins from Moses and finally led the Israelites into the Promised Land.

Inscribed on the pendant are these words found in Joshua 1:9: "Be strong and courageous. Do not be terrified; do not be discouraged, for the LORD your God will be with you wherever you go." (NIV) 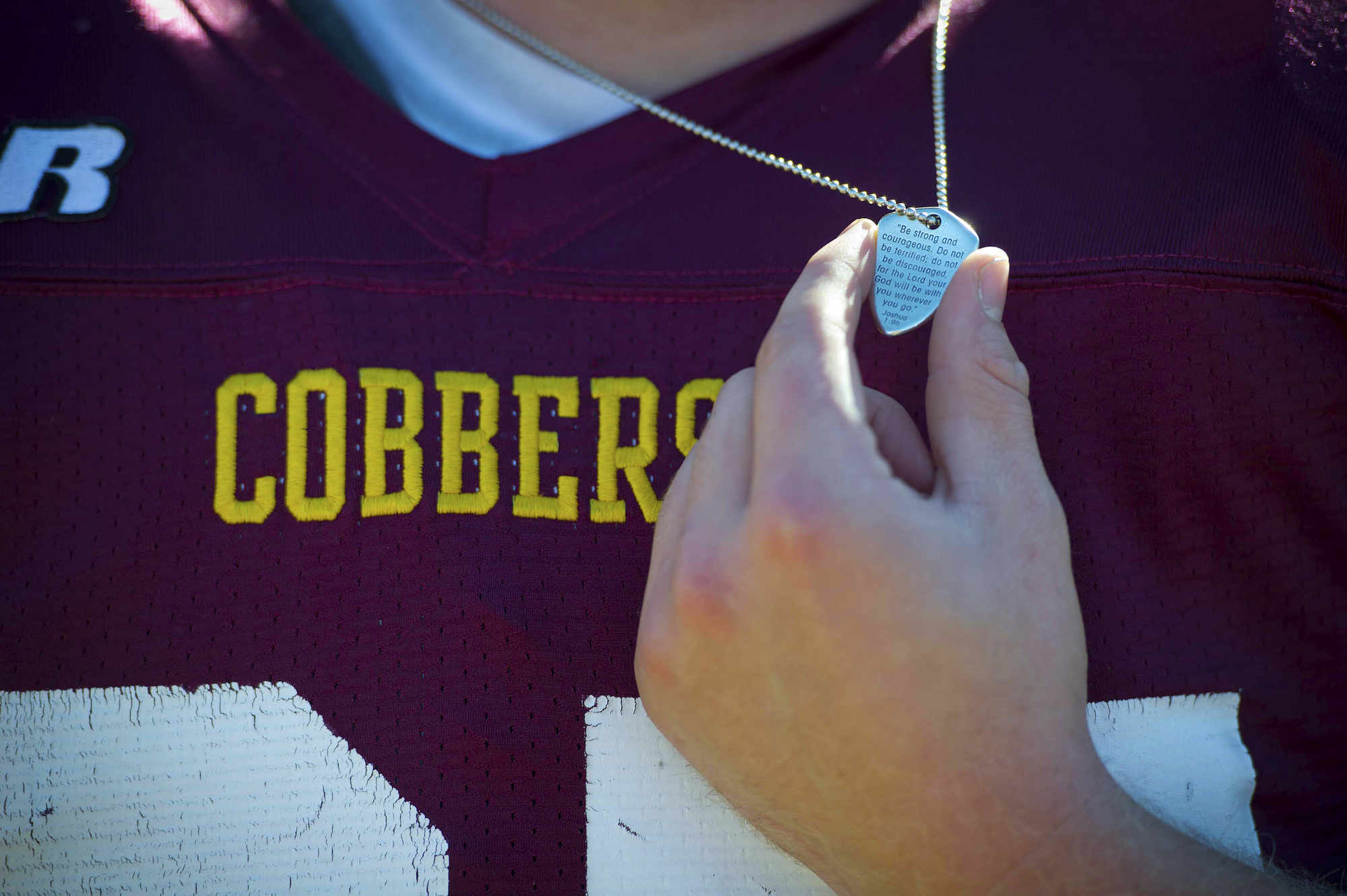 "Every night I take it off and thank God for the promise that's on it," says Rysdahl. "And knowing that I can turn to all of my teammates who are wearing it too means a lot to me."

Head coach Terry Horan '89 and the Rev. Ernie Mancini, former campus pastor and longtime team chaplain, started the Joshua shield tradition in 2004. Mancini discovered the poignant pendant while looking for something "spiritually significant" to present to the Cobber captains prior to the season.

"Joshua's shield is a sign of who we are and whose we are," Mancini says. "Wearing it reminds us of the great relationship we have with a God who loves us and is always in our lives."

Soon after presenting the Cobber captains with their shields, Mancini and Horan decided that everyone on the team should have one. Joshua's story has provided a rallying point for the team when facing adversity – on and off the field.

It has been in the bad times – times that have nothing to do with the trivial outcomes of football games – that Joshua's shield has provided the most vitally needed reassurance.

The story of Collin Rud is a profound illustration. Rud was among the first players to receive Joshua's shield as a freshman on the 2004 championship team. Difficult personal circumstances led to Rud's departure from Concordia after just one semester. He had hoped to eventually come back and play football for the Cobbers again. It never happened.

Horan got a call from Rud's mother early in the morning of May 21, 2007. She was calling just a few hours after her son had died from injuries sustained in a car accident.

"As she was going through Collin's belongings, she came across his Joshua's shield," recalls Horan. "She told me it was his most prized possession. When he was down, he would always take hold of it – and it would bring him up. She shared how Collin would often talk about his times at Concordia and how much receiving his shield meant to him. And she wanted to know where to get the shields, so she could present them to all of Collin's friends to let them know they're never alone. I was blown away."

Joshua's shield is a sign of who we are and whosewe are.  – Rev. Ernie Mancini

Horan shares that story with his new players at every Homecoming football chapel, hoping that it will bring deeper meaning to the Joshua shield they receive that day. Giles Henry '11 says he was honored to receive his, but he had no idea that the shield would take on such a profound significance for him so quickly.

Two days into football practice his sophomore year, he received news that his father had been diagnosed with pancreatic cancer.

"I was shocked," Henry says. "I remember just sitting there rubbing my shield and saying the words on it."

Henry kept the shield close to his heart and recited the Scripture verse often as he watched his dad suffer for two years before succumbing to cancer. It helped carry him through periods of overwhelming grief, especially during his dad's final days and funeral. Each time he says, "An extremely calming sense came over my body – a sense that everything was going to be all right."

Just three months after his dad died in July 2010, Henry shared his shield story at Homecoming football chapel. He encouraged his teammates to make sure they have their shields ready when inevitable trials come their way.

Horan and Mancini want everyone connected with the Cobber football program to find strength in Joshua's shield. They have started presenting them to alumni players as well, beginning with the all-football reunion in 2010.

"It helps us to grow closer together as a football family," says Horan. "As teammates, coaches alumni, we know we are there for each other and that with God we are never alone."

Adapted from the Fall 2011 issue of Concordia Magazine