Back in 1994, Stacey (Kaufman) Potter ’97 took a class from Dr. Mark Covey, professor of psychology, that had a lasting effect on her life.

“Ever since I did my service-learning project in Dr. Covey's social psych class, I wanted to write a story about my experience as it had a significant impact on me,” Potter said.

She finally got the courage to write it 15 years ago after hearing about National Novel Writing Month (NaNoWriMo). NaNoWriMo is a global writing event with the goal of writing 50,000 words (equal to a short novel) during the month of November.

“Unfortunately, with career, kids, moves, life changes, and the biggest factor – fear of failure – it sat in my computer getting dusty,” she said. “In the last couple of years, I started to feel the internal motivation to publish it, especially when asked the question, ‘If money wasn't an issue, what career would you choose?’ My reply, besides professional traveler, was author. I finally decided that I needed to make it happen.”

Potter has liked writing since she was a child and used to write stories frequently, but when trying to decide what she wanted to major in, she was very interested in psychology and possibly counseling or research as a career.

“I didn't think being an author was possible being raised in North Dakota,” Potter said. “I figured you had to live in New York City or Los Angeles to make it.”

Potter’s career has been a winding road from pharmaceutical research, county public health, and grant writing to sales for digital wellness products for a large corporation, all with the common theme of technical and business writing.

“I've been very fortunate to have exciting and mission-driven roles, but I needed a creative outlet, so I turned back to fictional writing,” she said.

She also offered this advice: “Don't wait half your lifetime to pursue your dreams!”

When prepping her manuscript for “The Project” to send to literary agents, she came across social media posts by her former college roommate and friend, Anna (Jose) Biehn ’96, who is one of the three founders of Minnesota-based Hadleigh House Publishing.

“Stacey and I actually met at Freshman Orientation in the fall of 1993, lived in the same dorm and, after two years, moved to a house off campus and have kept in contact over the years,” Biehn said. 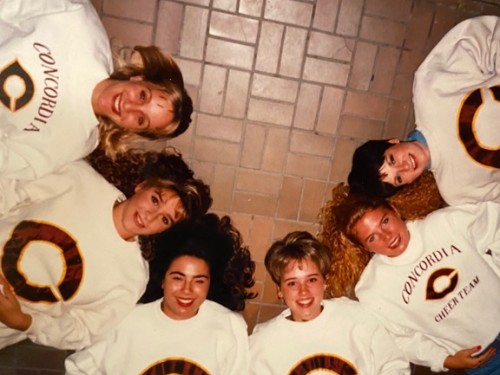 “At Hadleigh, we read the manuscript and thought it would be a great fit for our catalog and brand so we signed her to an author partnership,” Biehn added.

When Biehn’s two co-founders (both bestselling authors) came to her with the concept for Hadleigh, Biehn, who has more than 20 years of experience in the consumer-packaged goods market, joined them and Hadleigh was formed. Hadleigh is a female-founded, full-service publishing house with a unique author-partnership model.

Potter’s book is loosely based on her project for Covey’s class. She volunteered with the “adopt-a-grandparent” program at Eventide nursing home and was paired with Amy, an elderly resident, who was “energetic and contemporary for her age – never married, no children, and a business owner who loved baseball. From my perspective, she defied generational and gender norms. She was fascinating,” Potter said.

“I say that I write from ‘two truths and a lie’ because most of my writing is based on my personal experiences, but I embellished to make them more interesting,” Potter added. “The essence of Amy was captured in May’s character in the book. There are several real scenarios sprinkled throughout the book but fictionalized to protect the guilty.”

Even though it’s been 26 years and there has been a lot of students and student projects in between, Covey remembered Potter’s project.

“Now, I won’t be able to sleep until I’ve read Stacey’s book,” Covey said. “Seriously, I don’t remember many projects, but I do remember Stacey’s, largely because she could write and tell stories in such a way as to put you in that situation. And, she could understand her experiences within the context of the course content, which is why I made the assignment.”

Potter’s book follows a college sophomore, Sabella Pierce, as she “surrenders to her semester-long psych class assignment: volunteering as a companion for 83-year-old nursing-home resident, May. Having grown up with a bitter grandmother … Sabella dreads this project, but her anxiety … turns to fascination as she discovers May’s vibrant spirit, life of independence, and stash of handwritten letters from the one who got away … inspiring Sabella to create a project of her own: reuniting these two long-lost lovers while there’s still time.”

“The book is launching in December 2020 and, pending restrictions, we are planning a book tour stop in the Fargo-Moorhead area given Stacey is originally from Fargo and the connection with the area,” Biehn said.