Concordia Theatre’s first mainstage production will be unique in many ways.

“The Race” is being produced around the country in multiple places prior to the upcoming elections,” said Deacon Jon Leiseth ’92, director of the production. “The central question is ‘What do we seek in our elected leaders?’” 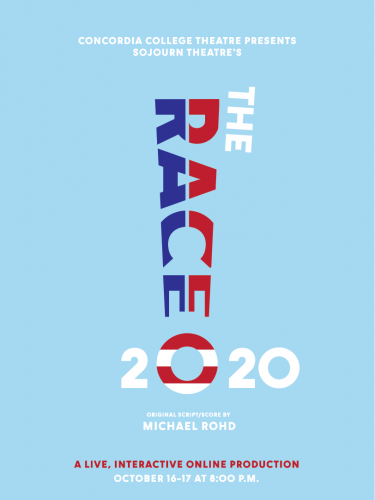 The pandemic also plays a part in the theatre’s production. Senior Mike Huynh, stage manager and crew member, said rehearsals have been done by Zoom a few times due to COVID-19.

“Actors are wearing masks and social distancing has been calculated so there will be 6 feet between the actors at all times,” Huynh added. “We are positioning them in a way that they won’t be in contact with one another.”

Masks have been the subject of a lot of conversation. Different types were tried including a see-through one that proved to muffle the sound too much. They’ve decided to go with regular cloth masks being produced for each actor by the costume designer. Microphones will be taped to the actors’ shirts so there won’t be difficulty understanding them.

“Everyone is working really hard to be responsible for ourselves and the people around us,” Huynh said. “Even the props are set up on a table with a section for each actor so they don’t mix their props with each other’s.”

The script for Concordia’s production has changed quite a bit since the original script was written in 2008 by Michael Rohd prior to the election of President Obama.

“The performance includes conversation hosted by the ensemble and crew inviting members of the audience to answer questions and enter into dialogue about what we seek in our elected leaders,” Leiseth said.

Beth Odden ’23 is working with the audience development team and said they are experimenting with audience participation in the play.

“‘The Race’ is an especially timely production and the performances will be one of a kind,” Odden said. “A lot of the driving force of the show comes from the uncertainty our nation feels right now and that magic will be hard to recreate once November passes.”

Bryan Duncan ’90, director of Campus Lights, will be responsible for recording the show. He said recording a show would normally be against copyright law without securing additional mechanical rights from the playwright and performance rights holder. In the age of COVID, getting the rights to be able to record or livestream a show is much easier.

“‘The Race’ is available to us at no charge and this includes the rights to livestream,” Duncan said. “As the year goes on, we will most likely be doing some form of broadcast of each show. Different rights holders have different rules – some allow recording of a single unedited production to be broadcast for ticket holders while others will only allow livestreaming of individual productions. Most will not allow you to edit several performances together.”

“The cast and crew have worked really hard under unusual circumstances to bring this production to light,” Huynh said. “We hope people join our online stream of the show.”

“The Race” will be livestreamed at 8 p.m. Oct. 16 and 17. The original plan was to livestream with a live audience, but the broadcast will now be through Zoom with breakout rooms for the audience.