Because of Concordia’s connection to the Lutheran tradition, worship has been a fundamental component of student life. Attendance was taken at both chapel and Sunday worship at local churches to ensure Cobber co-eds were engaged in religious activities. Chapel services were held in Old Main once it was completed in 1906. Before worship services moved to Memorial Auditorium in 1952 to accommodate larger crowds, two chapel services were held in the Old Main auditorium to hold the increased student body and faculty. Students, however, were not fond of worshipping in Memorial because of the expansive space and elevated seating. 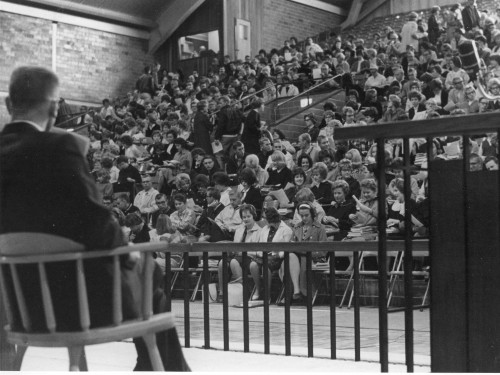 Starting in the 1920s, Concordia’s chapel services were broadcast on local radio stations. The broadcast became known as the Concordia Music Hour in 1937, and Professor G.L. Schoberg provided the narration for the service faithfully signing off each broadcast with “concordially yours.” Chapel broadcasts ceased during World War II and again aired in 1946. The radio station that carried the broadcast changed throughout the years from WDAY to KVOX to KFGO and eventually KCCM. Radio broadcasts came to an end in the early 2000s.

Worship at Concordia changed significantly in the 1950s and 1960s. First, chapel ceased being a requirement in January 1953. In the early 1960s, students urged the administration to hire a campus pastor even dedicating themselves to pay the salary for the individual hired. President Knutson agreed with the students’ request and hired Reverend Carl Lee in 1961. Until Lee began his post as campus pastor, Concordia’s religion department planned all chapel services often inviting local pastors, professors, and others to speak. In the 1960s, worship opportunities included chapel, mid-week Vespers, monthly all-college worship services, and dormitory devotions. Spiritual Emphasis Week also began under Lee’s tenure in which all chapel services, devotions, and seminars were devoted to a particular topic and its spiritual implications. For example, in December 1962 the topic was love, courtship, and marriage.

The latter portion of the 20th century witnessed much change in campus ministry. Mancini relinquished his post in 1983, and Lynn Ronsberg served as the interim associate pastor until 1984. Reverend Phil Holtan was hired as associate pastor in 1984 serving in this role until 1995 when Lee retired. Subsequently, Holtan became the senior campus pastor and Pastor Gretchen Person was named the associate pastor. The Religion Commission, the organization that sponsored the religious and outreach activities on campus, changed its name to Campus Ministry Commission (CMC) in 1989.

Through a variety of worship services as well as service activities, campus ministry continues as the foundational component of ministry at Concordia.