The Rev. David and Kim Adams are new innovators in campus ministry.

Concordia’s new campus ministers, the Rev. David and Kim Adams, started innovating for the college the moment they applied for the position in the Office of Ministry. There was one opening for a campus pastor and the couple applied and were hired together to share the role.

“We’re grateful for the trust this place has put in us,” David says. “It was a risk and we’re grateful that people chose to take the risk.”

The Adamses were also taking a risk. David was working full time in a pastoral position at First Lutheran Church in Fargo. Kim was working part time leading campus ministry at North Dakota State University. She had also just enrolled in a new accelerated program at Luther Seminary to earn her Master of Divinity degree to become an ordained minister. All that in addition to five active kids, the new venture seemed a little far-fetched. But the tug on their hearts and encouragement of others made them apply.

“The number of people who reached out to us as individuals and as a couple to tell us about this position was amazing,” Kim says.

Now David and Kim, along with Deacon Jon Leiseth and administrative assistant Angela Boser, make up Concordia’s Office of Ministry. While the couple says they have much to learn about Concordia and the students and staff here, they aren’t strangers to young adult ministry or working together.

“Campus ministry holds the solidification of both our calls,” Kim says. “To land back there feels really holy.”

As a student at the University of North Dakota, campus ministry was important to David. After a short time in graduate school studying vocal performance, he felt called to youth ministry. He took a position at Calvary Lutheran Church in Grand Forks, where he stayed for 16 years before deciding his next path was going to seminary. Kim worked as the director of youth ministry at Sharon Lutheran Church for five and a half years. Sharon and Calvary often collaborated in their youth programs, so the couple informally worked together for a few years before Kim joined the staff of Calvary as the coordinator of Young Adult and Family Ministries.

After David finished at Luther Seminary, the Adams family moved to Fargo and the couple hoped someday they would get to work together again. David started his call to First Lutheran Church and Kim headed up Crossroads Lutheran Campus Ministry at NDSU. Now David and Kim will also share the responsibilities at NDSU, which opens new opportunities for collaborations between the schools.

“The students show up to each other’s spaces,” David says. And that’s just one of the places Kim and David are excited about the potential.

As they learn about their new call, the question they keep in the forefront is: How can we do better for the church?

“We have the willingness to try things. Concordia’s strategic plan calls for innovation. That invites us to stay current and keep asking questions,” Kim says. “We have a huge desire to see how our treehouse perspective comes down to the ground and how we integrate into campus.” 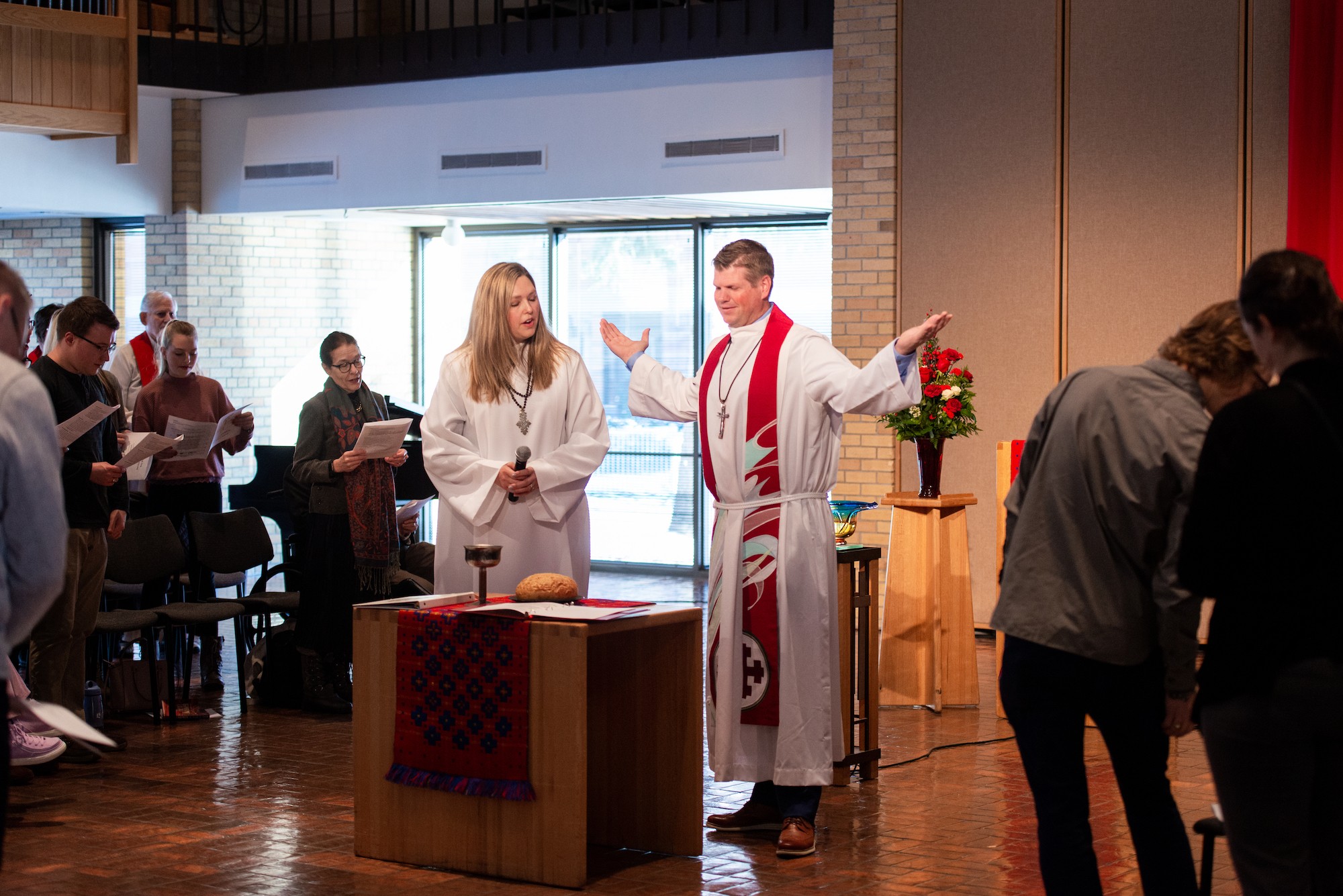 Right now, the couple is looking for ways to connect with students and staff both in and outside of worship.

“I’d like to find ways to intersect with departments,” David says. “We are looking for ways to make ourselves more known and be in relationship with the entire Concordia community.”

The couple says that will mean practicing radical hospitality, being prepared to journey alongside people, and knowing that sometimes they will be catching up to where the students are leading.

David agrees, saying the students push them to think of things anew.

“Concordia students come prepared to ask questions. They actively engage in the processes,” he says. “When a student comes to talk to you, they are ready.”

And those active student minds give the couple hope for the future of God’s church and mission.

“When we work with young adults, I know the church is in good hands,” Kim says. “It will probably look radically different. But they are seeking justice in this world outside the sanctuary.”