Chris Cartwright ’19 dedicated his summer to helping the community with Churches United for the Homeless.

Interning for Churches United for the Homeless (CUFH) was the natural progression for Cartwright. After being awarded the Swendseid Service Scholars Award, a scholarship awarded to those dedicated to serving others, Cartwright’s intentions for his career and the community were clear. Cartwright is a communication and theatre art double major at Concordia and was ready to gain hands-on experience this summer working with a nonprofit.

After finding this opportunity with CUFH on Concordia’s Handshake job and internship site, Cartwright knew it was an experience he couldn’t pass up.

“I’ve always wanted to work in a nonprofit, so I thought it would be good to get an internship with one,” Cartwright said. “I read about Churches United and all the work it does helping so many people, and I thought that was so cool so I decided to apply.”

As the first intern of CUFH, Cartwright explored a world of opportunities. While officially titled a development intern, Cartwright was involved with marketing, promotions, grant research, videography photography. 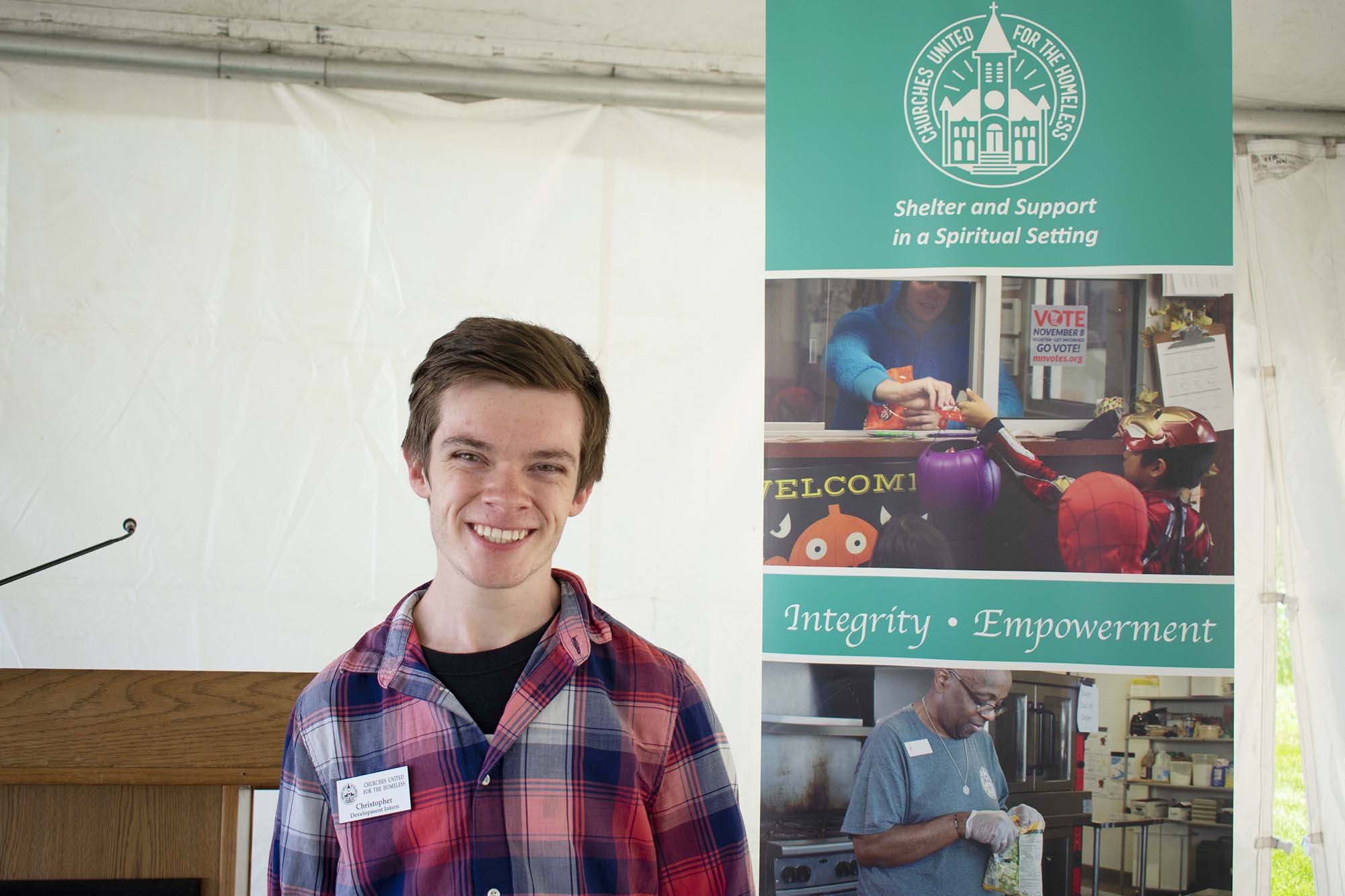 “I created a lot of marketing materials and designed a lot of flyers, posters invitations specifically for the grand opening event,” Cartwright said.

With the Bright Sky Apartments opening successfully behind him, Cartwright looked toward the next big event hosted by CUFH, the annual Gourmet Soup Kitchen. Churches United’s Gourmet Soup Kitchen is a fundraising event involving a live and silent auction, fellowship, and gourmet soups made by local celebrities and chefs.

Marketing the Gourmet Soup Kitchen presented a unique opportunity for Cartwright. Being tasked with taking promotional photos for the event, he had to get creative.

“I was able to do some food styling,” Cartwright laughed. “I poured some soup in a bowl and did some food photography. It was interesting but definitely fun.”

With the opportunity to gain so much experience while interning with CUFH, Cartwright felt prepared from his time at Concordia. Always encouraging internships and involvement, Dr. Kirsten Theye has been a professor, advisor mentor to Cartwright.

“She has this rule for advisees that she won’t let them graduate unless they’ve done two or three internships,” Cartwright said. “Even though it’s not a graduation requirement, it’s like a Kirsten requirement.”

It’s a requirement Cartwright has fully embraced. Previously interning with Prairie Public Radio, CUFH is his second internship as a Cobber. On campus, he is actively involved with Concordia Theatre, Concordia On-Air, and KORD Radio as station manager.

These experiences have challenged and provided Cartwright with what he believes to be the support, encouragement skills needed to prepare him for his CUFH internship, as well as future internships and jobs after graduation.

As an incoming senior, Cartwright offers a piece of advice to incoming and younger students at Concordia.

“Don’t limit yourself,” Cartwright said. “I came in and thought I would do some public relations internships. I didn’t even know I was interested in radio broadcasting until I had the internship with Prairie Public Radio, and it was so great. So just don’t limit yourself.”

Concordia's National Alumni Board recognized Solveig M. (Stenerson) Swendseid '50 for her distinguished service to others with the Alumni Achievement Award in 1992.