Sometimes, eyes can be bigger than the stomach.

Walk into Concordia's Anderson Commons and you will likely see dozens of students filling up their plates with food they will soon sit down and enjoy. The question is: How much of the food on their plates will they finish?

Plate waste, all the edible food items left on a plate to be thrown away, is a problem on many college campuses. Even if students eat the majority of food on their plates, the smallest crust of uneaten bread accumulates and adds to the waste.

Concordia noticed this problem and decided to learn more about it.

Plate waste studies have been happening at Concordia since the 1990s. In the recent study, the edible food left on a plate to be thrown was collected and weighed. These results can show if Concordia's food waste is improving or if progress is declining.

This year's study occurred Jan. 27-28 and involved many helping hands. Kopperud has been involving her first-year Inquiry Written Communication (IWC) students in the process for the past three semesters. Kopperud wanted to find a way to connect IWC assignments with what students were learning in their companion inquiry class, "Food in the World," taught by dietetics assistant professor Linda James. Food waste seemed a very real and accessible issue to address and allowed the students to get hands-on experience for their essays.

The inquiry students also pair with campus dietetic interns. This year, there are three: Hannah Moyers, Ryan Pierson and Katie Garske. They are working toward becoming registered dietitians – a title that requires internships and an exam. Moyers, a Wisconsin native and a graduate of Olivet Nazarene University, says she was interested in Concordia's dietetic internship program because of its focus on food service systems management.

"I have always been interested in food and grew to like its effect on health more in high school when two of my best friends and I started learning more about what we were actually eating," she says.

The three interns worked directly with two of Kopperud's inquiry classes, first meeting with them in their class, giving tours of the food production areas of Concordia and explaining the process of the study. Students then signed up for one-hour timeslots to work in the dishroom of Anderson Commons. During their shifts, they physically separated the edible food waste left on the dirty plates and bowls from the non-edible items (peels, napkins, bones, etc.). They ran the experiment for two hours during breakfast, three hours at lunch, and two hours at dinner. Every hour, the food waste they collected was put into one bin and weighed. The dietetic interns also weighed a sample of plates before the students ate to estimate the percentage of food on a plate that is eaten by a student. 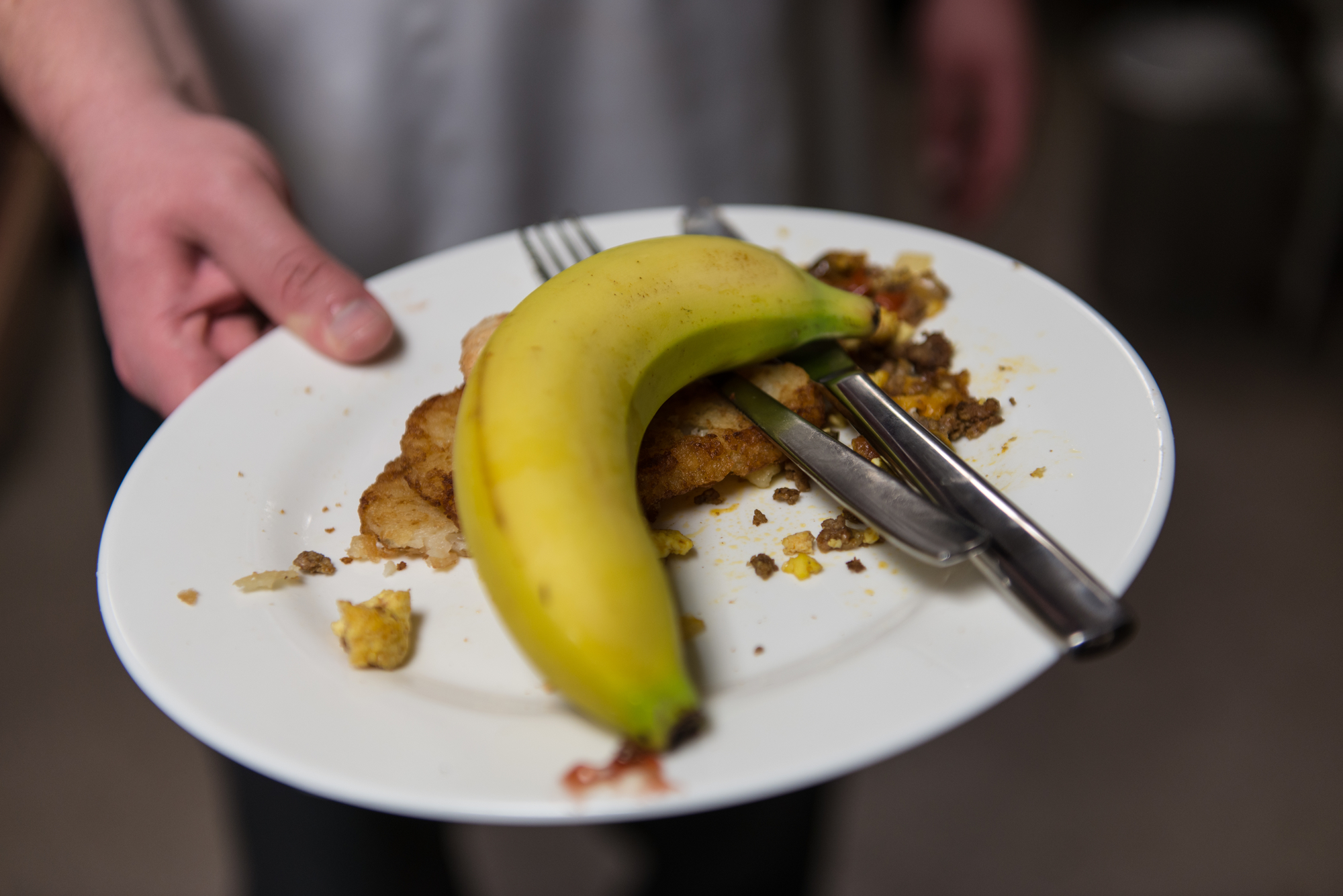 Over the two-day period, the average plate weight before students ate was 13.1 ounces. However, not all of that was consumed. During the two days, 54.75 pounds were wasted over the two breakfast periods, 232.75 pounds during the two lunch periods and 162.25 during the two dinner periods. In total, that is 441.25 pounds throughout the two days and 223 pounds on average per day. Should this same waste rate continue throughout an entire month, there would be about 6,600 pounds of waste – the weight of an average elephant.

Moyers says plate waste studies are important for many reasons.

"Here at Concordia, the reports the interns write on the plate waste study results are read by the dining services management team and help keep track of plate waste trends," she says. "It's part of the reason why we know plate waste has reduced since Concordia went trayless a few years back. It's one way of monitoring food waste trends over the years."

Inquiry students also had the opportunity to voice their opinions. The students wrote essays to propose ways in which the food waste could be reduced. In her essay, Sumeja Mujanovic '19 argued that Cobbers past and present can help reduce waste by using social media to raise awareness.

"Social media will allow us to reach out to others," she writes. "The issue of food waste is one that affects everyone, and the only way to make a difference is to be informed and start to change our habits."

Moyers says that the study itself is a way for students to realize how much the waste affects Concordia's Dining Services.

"Studies like this are important because it helps participants see an issue at hand and gives them the tools (and sometimes motivation) to take action to help solve problems such as food waste," she says.