Dr. Gay Rawson, French professor and chair of World Languages and Cultures, and Liane Mattson ’72 have each been named a Chevalier (knight) of the Ordre des Palmes académiques (Order of Academic Palms) from the French Ministry of Education. The national award distinguishes their promotion of the French language and culture. The honor was originally established in 1808 by Emperor Napoleon.

“I started crying actually,” Rawson said about opening the notification letter from the French government. “I was stunned, speechless. I had no idea.”

Upon receiving the distinction, Rawson learned she had been nominated by her colleagues at Concordia. Dr. Per Anderson, former director of Global Learning, called the award a most deserving recognition of Rawson’s creative and ardent endeavors and hopes it inspires others to follow her lead of service to global learning and citizenship. 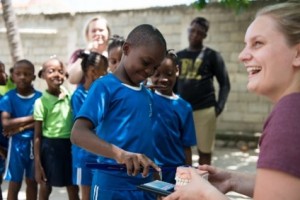 In addition to her time in the classroom, Rawson has traveled the world presenting her expertise, which includes technology, foreign language pedagogy, study abroad programs, and business languages. She has led students working and learning in Cambodia, Cameroon, Canada, China, France, Germany, Guadeloupe, Haiti, Switzerland, and Vietnam. She tells her students it’s her way of working for peace.

“I get to share all of those cultures with students and connect with all of these different people around the world,” Rawson said. “It's powerful when you start to understand someone and connect with them. I think it just brings us closer together.”

Rawson has experience teaching French to all ages, including toddlers in the Cobber Kids early education center.

“The kids are amazing and such little sponges,” Rawson said. “They'll understand there's more than one way to see the world, that there isn't one right way to say something.”

Two aspects of French culture that resonated with Rawson early on were the importance of education and the value of hard work — ideals she displays daily though, for her, it’s not difficult.

“I love reading French literature. I love listening to French music. And it's just a boon that I get to travel the world speaking French and talk about these books. I can't think of a better match,” Rawson said. “People think I'm working all the time, but I just think I'm super lucky that the things I love have come together, and I get paid to do that.”

As a Concordia student, Liane Mattson recalled a May Seminar to France as a turning point in her life. She became a French teacher and spent several summers and fall weekends as a counselor at Concordia Language Villages.

“I always told my students that whether or not they become fluent,” Mattson said, “the most important reason to learn a language is to learn about other cultures and other ways of expression; to see value in differences and recognize that we can all learn from each other.”

She became the national director of Nacel Cultural Exchanges, welcoming students from France to stay in American families and working with teachers throughout the U.S. and France to organize family stay programs in both directions.

Mattson said learning a language in a host family setting cultivates the ability to overcome challenges and deal with others in a positive and effective manner.

“Students AND host families are enriched by the friendships created and become more aware of our role as world citizens,” she said, “moving in the direction of a more peaceful world.”