Gia Rassier ’10, Megan Myrdal ’09, and Jeff Knight ’04, founders of Food of the North, collaborated with Drekker Brewing Co. to create their own unique ale called Brewed of the North. 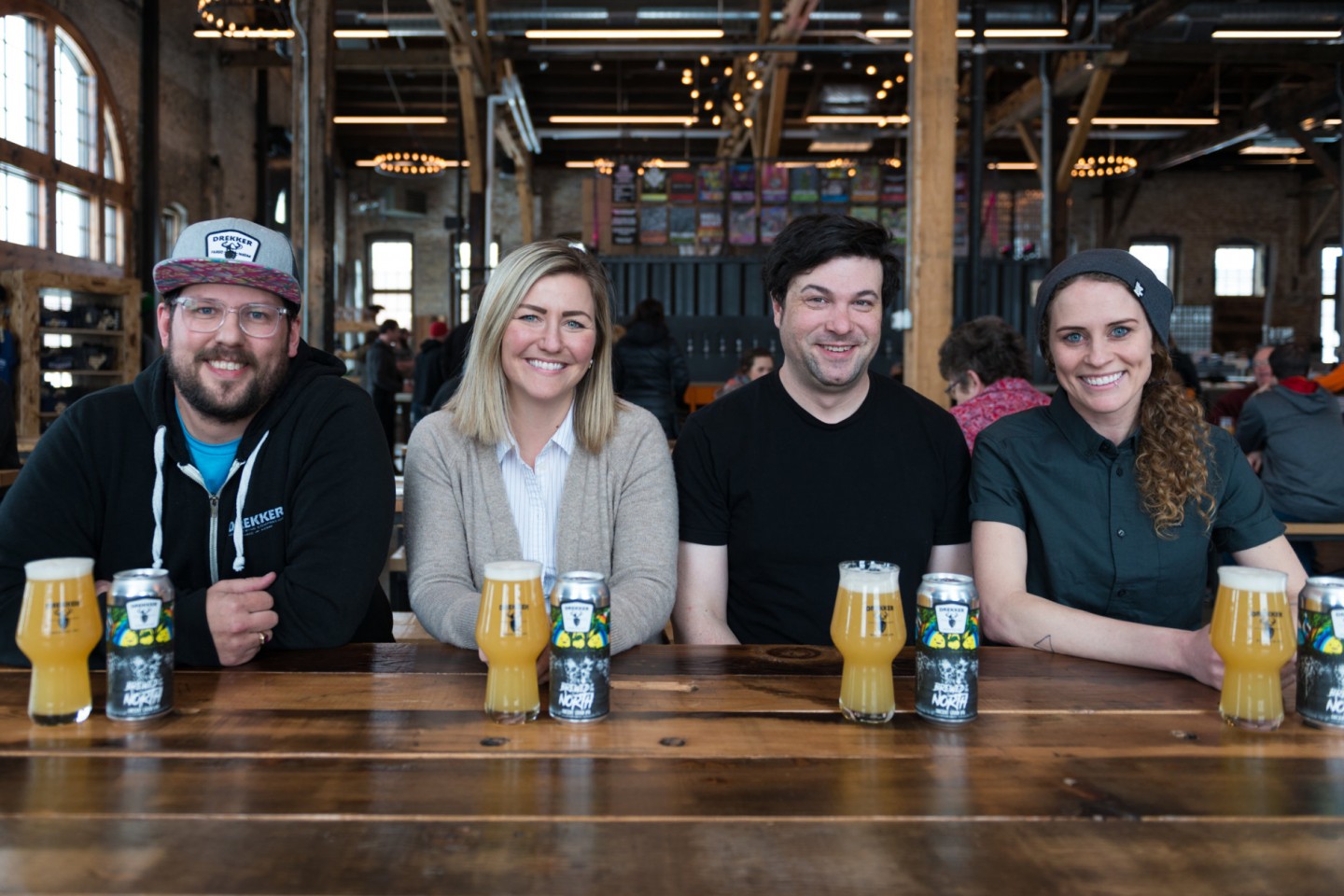 Before we discuss your collaboration with Drekker, can you tell us about Food of the North?

Gia: The idea for Food of the North was born (fittingly) in my kitchen back in 2015 when I was hanging out with my friends Megan Myrdal ’09 and Jeff Knight ’04. We ended up watching a YouTube segment by John Oliver that featured the devastating amount of food wasted in the United States. We were shocked to learn that 40% of food resources are wasted each year, while nearly 50 million Americans live in food insecure households. We have an abundance of food, but a huge amount of it is not reaching those who need it. A large portion of that waste is comprised of perfectly good fruits and veggies that never make it to groceries and farmers markets because they aren’t aesthetically pleasing. [Spoiler alert: This concept is how our original name, Ugly Food of the North, was later born.]

Inspired, we decided to host an event in conjunction with the Red River Market (then in its first season) and encouraged vendors to bring produce they wouldn’t typically try to sell. We asked people to buy this imperfect produce, make a dish to share and join us for a community potluck. We weren’t sure what to expect, but over 100 people showed up and wanted to know more. We saw a need for continued conversation about creating a more sustainable food system in Fargo-Moorhead – and, essentially, that’s how Ugly Food of the North was born.

As we’ve grown, so has the scope of our work. In the spring of 2016, we launched our ​Little Free Garden​ project and First Fridays at B​ in 2018. The goal of our rebrand to Food of the North is to create a name and brand that better encompasses who we are and the work we do (celebrating, connecting and empowering the Fargo-Moorhead food community) and can represent our three main projects: Ugly Food of the North, Little Free Garden, and First Fridays at B.

Megan: What was supposed to be a one-time event in collaboration with our local farmers market has become a nonprofit that’s hosted over ​50 unique events​ and launched a couple of side projects – Little Free Garden, which encourages people to place small gardens in public spaces and share the food with their community, and First Fridays at B, a monthly food-focused event to discuss timely topics.

How did the collaboration with Drekker develop into creating Brewed of the North? Why did you want to work together?

Gia: In 2015, we hosted our first event, a community potluck, at Drekker Brewing. A year later, we hosted our first birthday party in Drekker’s downtown taproom. Over the next few years, we hosted multiple events with Drekker’s support – so when they approached us in late 2018 and suggested a collaborative beer, the answer was a resounding YES.

Besides the great craft beer, I’ve always loved the Drekker team’s desire to partner with other organizations. Whether it’s showcasing local art, hosting a potluck featuring sustainable food or welcoming a band of storytellers, you can always count on the Drekker team to support our local community.

Jeff: Drekker has always been a great believer in what we do and has supported us from early on. They’ve helped us host space for events and, naturally, through a conversation between them and Northern Plains, it came about to do a collaboration.

Megan: From the start, the guys at Drekker (including fellow Cobber grad Mark Bjornstad '06) have been super supportive of our work, including hosting multiple events and making us their featured nonprofit where they donated a percentage of beer sales for an entire month to support our work. In late 2018, they approached us about doing a collaborative beer featuring locally grown ingredients. We were super excited and started tapping into our network of local growers. Since we were coming into the winter season, we decided to source a variety of ancient grains from the Northern Plains Sustainable Agriculture Society to develop an Ancient Grain IPA. I absolutely love working with Drekker! They are great people who care a lot about our community and brew delicious beer. Whenever Drekker asks us to be involved, we say yes!

Learn more about the Brewed of the North 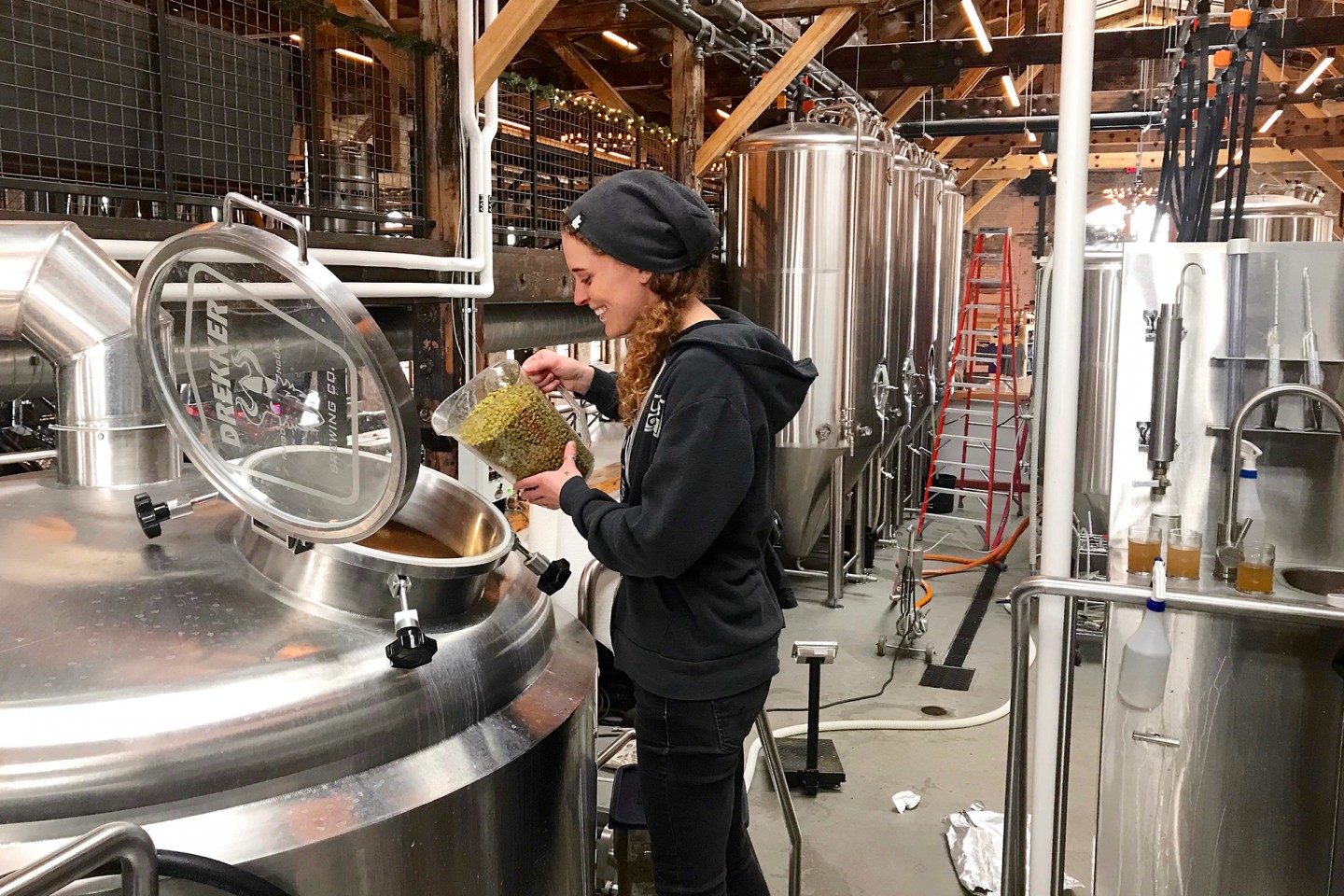 What is your favorite aspect of running your organization?

Gia: My favorite part about Food of the North is creating spaces to bring people together. Whether it’s attending food trivia at a brewery, building and painting Little Free Gardens, or listening to a chef or farmer share their journey – I’ve been so inspired and encouraged by watching our community form relationships with one another through food. At the end of the day, I believe food has a universal ability to unite people and, in today’s world, that shared sense of community has never been more important. On a more tangible note, it’s been so cool to see our Little Free Garden project grow. What started as a simple idea in my kitchen with two friends has grown to include a network of more than 200 gardens in 16 states and Canada!

Jeff: Technically, I would say I don’t run it but rather am now more of a supporter and partner in helping out. I’ve been able to supply Food of the North with design services and assistance where I can, but I do so because I believe it is finally connecting people that may not be in the same room together to discuss the hard issues related to food in this area and what we see in other communities.

Megan: The mission of Food of the North is to connect, celebrate, and empower our local food community and beyond. We have spent a lot of time learning about and sharing the story of the people and projects in our Fargo-Moorhead food community, and I have to say that’s my favorite part of our work. There are so many people doing amazing work in our local food community but, often times, these people and their projects go unnoticed. Our organization has done some really cool work to celebrate these people and share their initiatives. It’s been fun to see how this is helping our community partners, as well as help others find ways to get involved in the local food world.

How did your time at Concordia help prepare you for this chapter of your life and your work with Food of the North?

Gia: I double majored in journalism and communication because I’ve always wanted to tell and share stories that matter. Food of the North has given me the opportunity to not only learn from but share the stories of so many passionate and dedicated people working to build a strong and vibrant food community. Concordia’s mission to send forth graduates to “become responsibly engaged in the world” has always resonated with me, and I believe that Food of the North is a way for me to live out that mission (aka BREW) in the Fargo-Moorhead community.

Jeff: Respect for systems thinking in regard to a multidisciplinary approach to solving problems is how Food for the North came about. It was developed by three people, two of whom are not involved in food systems at all but rather are more experts in promotion and event building. The openness to the idea of food waste and its impact on everyone made this issue an interesting one that we immediately gravitated toward.

Megan: So many ways! Concordia’s mission to be responsibly engaged in the world is really at the heart of Food of the North. A phrase we use a lot in our work is to “think global but act local.” We know that a lot of the issues we’re talking about as an organization are huge, global problems (waste, hunger, etc.). These problems seem so insurmountable and a person may not know where to begin to be part of the solution. Concordia really instilled a passion to think about these larger issues but find ways to contribute to the solution in your own way. I think we’ve taken this to heart in the work we do. 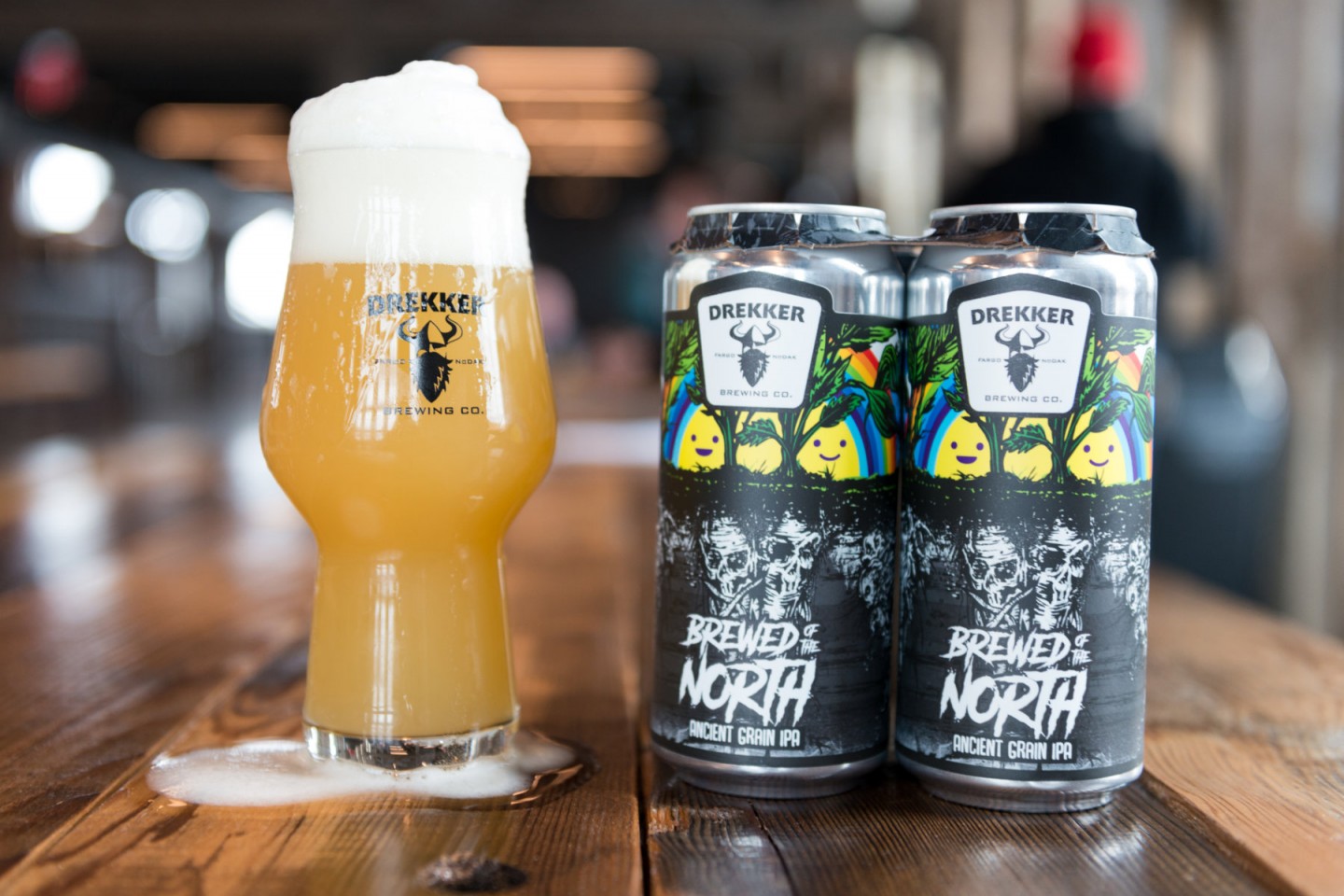 What do you envision for Food of the North going forward?

Gia: We never set out to form a nonprofit, but looking back over the past three years – it’s been really cool to see how far we’ve come and what has changed in our local food community. I’m excited about possibilities and look forward to what the future holds for Food of the North.

Jeff: I’m taking a bit of a step back as I’ve started my own design studio and have gotten progressively more busy with that, getting married this summer, and having just moved into a new house. Life changes are forcing me to take a bit of a step out of Food of the North for the immediate future, but I hope to stay involved and will certainly support the efforts of the group. Food issues aren’t going away anytime soon, so I hope the conversation and action continue to make positive changes.

Megan: First Fridays at B is our most recent initiative and we see a lot of promise in the platform. It started in January of 2018 as a way to engage and discuss important food topics in the F-M community. It’s been really cool to see the community that’s being built in that space, the stories it’s elevating, and the ideas it’s sparking. One dream for First Fridays is to see it start in other communities, and we’re actually in conversation with folks in Bismarck right now who want to launch a First Fridays chapter. It’s pretty exciting that people are recognizing our work in other communities and want to be a part of it.

At the end of the day, we just hope people continue to see Food of the North as a group of passionate people in our community who care about doing good and have a lot of fun in the process.

Learn more about Food of the North